Rutland, VT— Rutland Republicans proudly announce the candidacy of Eric Maguire for Vermont House of Representatives to represent the city’s southeast quadrant that votes at Christ the King school. Prior to this year’s redistricting, it was Rutland 5-2, but now will be called Rutland-5. Representative Larry Cupoli, having served the city as Representative for 10 years, will be retiring from office in January 2023. We extend our sincere appreciation for his dedicated service. 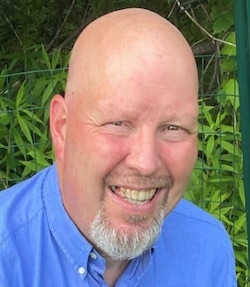 Maguire, a fourteen-year resident of Rutland City, moved here to be near his son. He resides on Jackson Avenue with his soon to be wife Cara and seven-year-old stepson Bryce. His thoughts on Rutland are summed up with, “I believe Rutland is Exceptional, I believe Vermont is Exceptional. I would consider it an honor and privilege to serve as your representative.”

Since moving here, Eric has been very active in the community, applying his education to helping people move forward. His titles include former Director of Vermont Achievement Center’s Reentry Housing Programs, current Director of Rutland Dismas House, President of the Board of Directors of both the Rutland Turning Point Center and the Recovery Partners of Vermont, and member of the Board of Directors of Rutland County Restorative Justice Center.

Maguire holds a Master’s Degree in Human Services – Criminal Justice from Liberty University in Lynchburg, VA. His kind and sincere heart, yet efficient and goal-oriented personality make him an effective community leader. He shared, “I have served people without bias, always putting people above policy.” His reputation reflects that reality.

Because he is very familiar with the struggles of many in the Rutland area, Eric’s desire is to serve the community in the State House by working to bolster economic growth that will benefit all, as well as working to get the necessary resources for our community’s social programs without raising taxes. “I make this commitment to the people of Rutland, I will always vote against any new or increased taxes,” added Eric.

Maguire stated that he “believes in common sense, solution-focused resolve, keeping an open mind and treating all I engage with dignity and respect; never closing the door on a conversation. I will always put people before party, or special interests, and work hard to make Rutland a better community to live, work and raise a family.”