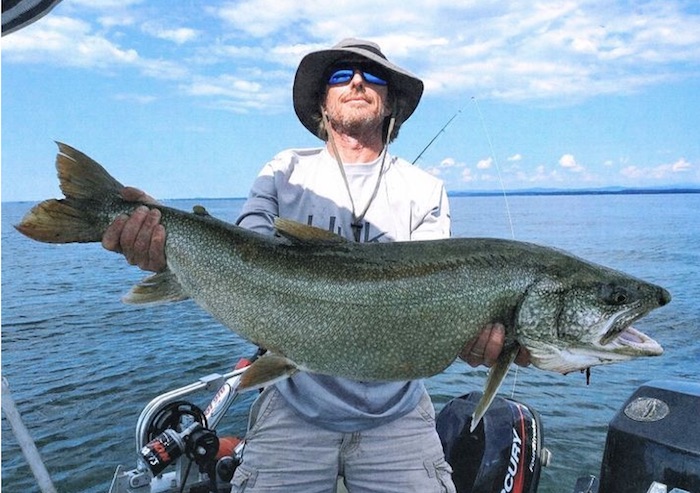 Angler Jeffery Sanford, of South Burlington was fishing alone the day he jigged up the 36.5-inch lake trout from over 100-feet of water.

“I just got my first boat this year, and it was my first time out alone,” recounted Sanford.  “It hit on my first cast of the day. Once I netted it and got it in the boat I was astounded at its size and lack of any lamprey scars or wounds.”

Sanford said he wanted to release the lake trout alive but was unable to revive the fish, so he brought it in to be weighed officially as part of Lake Champlain International’s Basin Derby, and he also entered it into the Fish and Wildlife Department’s record fish program. The fish currently sits in first place for the derby’s lake trout category.

According to department fisheries biologist Shawn Good, who oversees the Vermont State Record Fish Program, Sanford’s catch is a reason for celebration.

“Jeff’s fish is the largest lake trout from Lake Champlain entered in the Record Fish Program since the department started keeping fish records in 1969,” said Good. “There have been much larger lake trout caught in other Vermont waters, but this Champlain fish is a big deal.”

According to Good, it is a direct result of good lake trout habitat in Lake Champlain and ongoing sea lamprey control efforts.

Sanford’s observation of no sea lamprey wounds on his record catch is significant, says Good.

“We’re seeing lower overall wounding rates on many of these fish, and the fact that anglers are catching older, larger lake trout, salmon, and other fish species is proof that continued long-term sea lamprey control is working, and resulting in improved fishing opportunities on Champlain.”

Elizabeth Ehlers, Tournament Director of the LCI Fishing Derbies, says the annual Father’s Day Derby and year-long Basin Derby have seen bigger and bigger fish in recent years. “There’s been an upward trend in size for many of the species entered in our derbies.  Over the past 10 years, we have seen several record-breaking fish in cold, cool and warm water species divisions.”

“While our anglers are incredibly dedicated and skilled, these catches are not just by chance or luck. The Vermont Fish and Wildlife Department has worked tirelessly to protect and restore the Lake Champlain fishery. Their management efforts – including lamprey treatment, control of invasive species, and fish stocking – have benefited all who enjoy this resource. The impact of their efforts extends far beyond the angling community, as Lake Champlain anglers contribute over $200 million dollars annually to local economies.”

Jeff Sanford says he’s grateful for the fishery that continues to improve on Lake Champlain.

“It was an amazing fish and quite the battle. I’m extremely excited for next season!  We have such an incredible fishery here.”

Sanford says he credits the openness of other anglers in the lake’s fishing community with helping him catch the lake trout and becoming a better angler.

“I just learned how to jig for lake trout this year from friends like Will Nolan, Ryan Carpentier and Jamie Shiekone. They provided the mentorship and tutelage I needed to learn a new technique.  Everyone’s so open and friendly, and willing to help you learn something new.”

Good says that is heartening to hear.

“To maintain and grow participation in the sport we all love, it takes a village. I’ve always encouraged avid anglers to take newcomers out and show them the ropes. It can be challenging for a new angler to learn techniques that will help them be successful.  I hope more anglers step up and become mentors to friends, family, even strangers.”

This fall, the Lake Champlain Fish and Wildlife Management Cooperative is conducting sea lamprey control treatments on four Vermont rivers containing spawning populations of sea lamprey. The Winooski River was treated on October 2, the LaPlatte River will be treated on October 14 or 15, and control treatments will take place on the Lamoille and Missisquoi rivers within the next month.