Gov. Phil Scott said Friday at his regularly scheduled press conference that he will do whatever it takes to keep Burlington safe if the ongoing protests over police use-of-force turn violent.

“I won’t get into the specifics of what we would do, but we’re here to help,” he said. “ … State government and any government is there to assist in the public safety of its citizens, this is no different. If there was a request for help from the mayor, we would obviously engage and do whatever we could to assist.

“But I want to stress these are peaceful protests — there hasn’t been the violence that we’ve seen in other states and other communities. We hope that continues, and if it does then we won’t have a problem.” 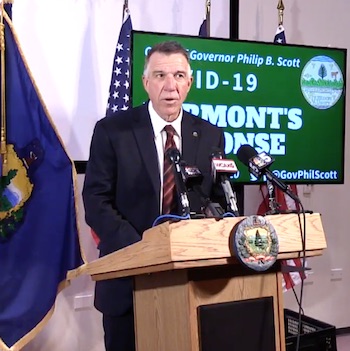 Gov. Phil Scott on Friday at a press briefing said state government would help Burlington maintain peace if called upon to do so.

For more than a week, hundreds of protesters have gathered at Battery Park and other parts of the city and demanded that the mayor fire three Burlington police officers who have been involved in use-of-force incidents over the past two years: Jason Bellavance, Cory Campbell, and Joseph Corrow.

RELATED: Despite claims of police brutality, controversial use-of-force incidents are rare in Burlington

These include two late-night altercations between black men and officers, and another white man died from complications days after a physical altercation with an officer outside of UVM hospital.

The two black men were Mabior Jok and Congolese immigrant Jérémie Meli, who were arrested in 2018 in separate back-to-back altercations on Sept. 8-9. The charges were dropped for both men, and police bodycam footage has since sparked debate over whether police used too much force during thealtercations.

The third incident took place in March 2019 between Campbell and citizen Douglas Kilburn outside the UVM Medical Center. When a disagreement during a hospital visit turned hostile, Campbell punched Kilburn in the face, and days later he died. The officer was cleared as not at fault by Attorney General TJ Donovan.

The incidents, caught on camera, have driven a rallying cry for police reform in the city by groups such as Black Lives Matter and the Vermont Racial Justice Alliance. The police union and police chief have recently said they cannot fire the three officers involved in these incidents.

Nevertheless, protesters claim the three police officers abused the suspects and are against black and brown residents in the city.

Former Burlington Police Chief Brandon del Pozo posted on Twitter that some protesters are acting as if they are the police now. “It’s interesting to see how anti-police activists don’t hesitate to act like they’re cops at the first chance,” he tweeted.

People who organize & deploy to block & redirect traffic against drivers' wills are acting as… police. Resolving contested use of public spaces requires… policing. It's interesting to see how anti-police activists don't hesitate to act like they're cops at the first chance. https://t.co/PrZK7PN0fn

WCAX-TV news anchor Céline McArthur attempted to talk with the protesters, but was met with complete silence.

The mystery surrounding @MiroBTV / Burlington protestors continues into day 9. Protestors tell @wcax to expect a statement today. Still no info on who’s in charge at #BatteryPark. During my 2nd roadblock last night, I got out & spoke to demonstrators, to learn more. #btv pic.twitter.com/FTXWjBc4g0

While protests in Burlington have remained peaceful, Black Lives Matter protests elsewhere in the nation have resulted in looting, massive property damage and even murders. Some major U.S. cities to suffer from left-wing violence included Portland, Seattle, Chicago, Washington D.C., and Minneapolis, and most recently Kenosha, Wisconsin. Most of these cities refused to accept help when President Donald Trump offered to send the National Guard.

Scott’s message on Friday was one of hoping the protests stay peaceful.

“Here in Vermont we’ve been fortunate not to have any of the violence that we’ve seen across the country,” he said. “I support peaceful protests, and the protest that’s happening in Burlington again thus far has been peaceful. So as long as it maintains that peaceful nature, no one will have to intervene. It’s the largest city in the state, they have a very qualified police force. The mayor is on top of this, and if there is anything that we can do to assist, obviously we are there to help.”

Scott refused to give specifics on what he would do if things begin to get out of hand.

Meanwhile, the Vermont Racial Justice Alliance issued the following statement in the group’s newsletter Thursday, indicating solidarity with the protests.

“We categorically agree that these officers should be fired, an outstanding demand from the work of Operation Phoenix R.I.S.E. We also stand in solidarity with the protesters that have occupied the park for the last 10 days! We are neither defending nor explaining these demands because they are right and they are just. In a time when the biggest threat to black bodies is policing and in a place of racial reckoning NOW is the time for these officers to go. These protesters have indicated that they will not leave the park until these officers are removed. We will stand with them and continue to lift their voices until the demands are met. #BlackLivesMatter

37 thoughts on “Gov. Scott says he would ‘do whatever we could’ if Burlington protests turn violent”