A Burlington Police officer involved in a use-of-force incident has been cleared of any charges after review of a deadly altercation that occurred earlier this year.

On March 11, officer Cory Campbell was called to the UVM Medical Center to help medical staff with a visitor, Douglas Kilburn. Kilburn was arguing with staff while visiting his wife, who was a patient at the time.

Initially, Campbell and Kilburn interacted without incident. Campbell was successfully able to de-escalate the situation, in which Kilburn had become agitated.

But later in the day the two men crossed paths again, and things turned for the worse.

Kilburn was blocking the ambulance bay with his car and was in the middle of another verbal altercation with the hospital staff. Campbell was passing by while on another task and he saw the situation unfold. Campbell yelled using profanity at Kilburn. 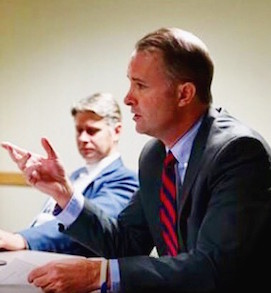 Kilburn who at that point was in the process of leaving, instead stopped his car to get out and confront Campbell. Kilburn threw a punch connecting to Campbell’s jaw, and Campbell responded with three punches to Kilburn’s head. Kilburn at that point was bloodied and he was arrested.

The whole incident was caught on both bodycam video as well as hospital security video.

Kilburn was hospitalized and charged for hitting an officer. He was sent home, but three days later during a wellness-check, he was found dead in his bed.

The autopsy report indicated there were a handful of contributing factors to his death, including hypertension, type-2 diabetes, obesity and skull fractures. The death was ruled a homicide.

At a press conference Friday, Donovan said Campbell’s strikes at Kilburn were “a reasonable amount of force” considering that Kilburn struck first. He added that Campbell’s use of profanity seemed to instigate the physical altercation. However, he added “there’s more work to be done.”

“It is the Office’s hope that the Burlington Police Department will commit to de-escalation training for their officers to ensure that their department is equipped with the tools they need to effectively and safely respond to members of our community in crisis,” a news release from the Attorney General’s Office states.

Campbell is currently on administrative leave and he is getting training on de-escalation techniques.

Kilburn’s son and widow attended the news conference. Each of them had strong words condemning the resolution. Tyler Kilburn called his father’s death “corrupted by insider politics.” The widow, Sherry Kilburn, said, “Here Campbell gets to get this information and be all, ‘Yeehaw, I’m free now, I’m not going to be charged.’ It’s not right.”

A special use-of-force expert Steve Ijames examined this case to help Donovan reach his conclusion. Ijames concluded that while Campbell was very professional during his first interaction with Kilburn, things could have been handled better during the second meeting.

“It does mean that as professional police practitioners we must objectively assess the way we interact with irate and irrational people, identify officer behavior that is associated with a violent response, and then determine from a policy and training perspective whether that behavior should be encouraged or discouraged,” Ijames wrote in a report. “In the immediate case and as previously stated, officers should refrain from using profanity.”

Ijames’ report defended the three strikes by Campbell against Kilburn.

“Striking him back to prevent further assault was appropriate, proportional to the threat
presented, and generally consistent with contemporary police training, policy, and practice,” he wrote.

Two other high profile use-of-force incidents have put the Burlington Police Department under public scrutiny. These involved Mabior Jok and Congolese immigrant Jérémie Meli, both black males. They were each arrested during altercations which occurred on Sept. 8-9 of 2018.

In both cases, charges against the men were dropped. Police bodycam footage showed force by officers that, according to social justice activists, was excessive.