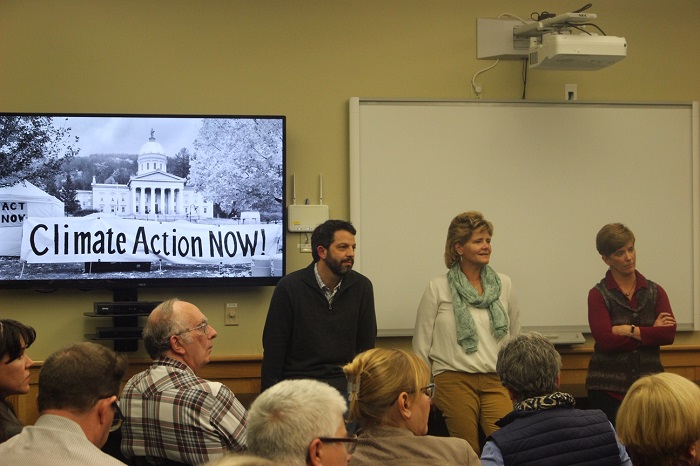 ESSEX JUNCTION — The Vermont Climate Solutions Caucus met Thursday to discuss transforming the state into a green-energy leader, but some ideas expressed at the meeting may find little support from the governor, based on his recent comments.

About 30 people gathered at the Essex Police Department to hear what Democrat and Progressive state lawmakers had to say about possible climate change legislation for the 2020 legislative session.

As with previous climate caucus meetings, the lawmakers focused on how to limit carbon emissions related to heating and transportation. This focus means getting the state to push for more electric vehicles, more in-state renewable energy production, greater insulation of homes and a transition toward alternative heating sources like wood-pellet stoves and cold-climate heat pumps.

When it comes to Vermont’s potential membership in the regional Transportation and Climate Initiative (TCI) — a 12-state partnership to cap-and-trade carbon emissions — the caucus members, starting with Pearson, offered strong endorsement.

“In mid-December, it’s anticipated that we will get an announcement from the governors on the framework for TCI,” Pearson said. ” … That is a very, very promising program, mostly because it involves this whole region, and we’re not doing it alone.”

Such optimism for the regional program seems premature in light of comments Gov. Phil Scott made last week at the governor’s weekly press conference.

“We have to be objective about this,” the governor said. “But suffice to say, my feelings haven’t changed on a carbon tax. If that is all it is, a carbon tax, then I’m not supportive of that.”

Nevertheless, Pearson said “the Climate Solutions Caucus is excited to pursue this,” and he explained that, under the TCI, distributors of carbon-based fuels will see a surcharge that will be used for investments in electric transportation. Electric vehicles already are getting federal subsidies up to $7,500, in addition to in-state subsidies by the electric utilities.

A few attendees at the meeting challenged the lawmakers’ premise that Vermont’s economy needs to be overhauled to prevent a planetary climate disaster.

Jeffrey Kaufman, a medical doctor from Burlington, spoke out against some of the ideas presented by climate caucus members.

“I think there’s an issue with presuppositions and some of your basic assumptions, which are apparently driving all of this legislation and discussion and fears you are referring to,” Kaufman said.

Citing a book he was carrying with him — “Inconvenient Facts: The Science That Al Gore Doesn’t Want You to Know” — Kaufman said carbon dioxide is not a pollutant, but a naturally occurring gas essential for plant growth. He argued that since CO2 comprises just 0.04 percent of the Earth’s atmosphere, it’s not likely a central cause of climate change.

Pearson, addressing Kaufman’s concerns, replied, “I don’t think it makes sense for us to debate global warming or the climate crisis.”

Kaufman responded, “I think it does, because that’s the premise that has to be made … [for] everything that we all are going to be subjected to.”

Green energy costs more than energy derived from fossil fuels. Vermont’s commitment to green energy quotas, as detailed in its renewable portfolio standard, is likely to cause the cost of energy to go up for Vermont ratepayers.

Pearson also said the energy-use targets of the 2016 Paris Agreement are not ambitious enough. Those targets include reducing carbon emissions by at least 40 percent below 1990 levels by 2030.

According to Copeland-Hanzas, states need enforceable mandates, such as those being proposed in the Global Warming Solutions Act, S.173, a bill modeled after a law passed in Massachusetts, Connecticut and Rhode Island.

“It is absolutely a way to come together and demand that we make the tough decisions,” she said. “We’ve had these aspirations in statute for a long time, but there’s never really been anything that’s forced us to sit down and figure out these tough policies to put in place.”

There will be an “accountability” component of that law, Copeland-Hanzas added.

“Accountability means there would be a citizen right-of-action if after two or three or five years Vermont isn’t making progress towards meeting these goals as a state requirement,” she said. “There would be potential for Vermonters to say, ‘Nope, we demand that our state government is going to lead us to make these greenhouse gas reduction goals.'”

25 thoughts on “Climate caucus meets again, but some ideas may lack buy-in from governor”