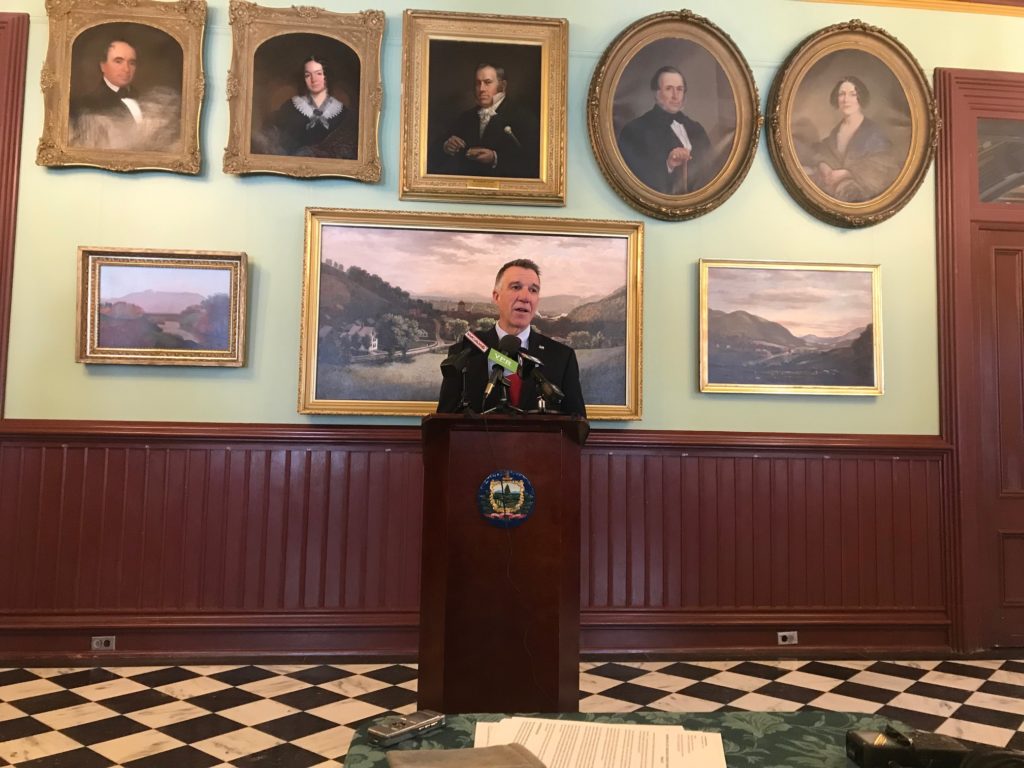 KEEPING HIS WORD: Gov. Phil Scott says he’s still not going to support a carbon tax, even though he’s weighing Vermont’s membership in the Transportation and Climate Initiative along with 11 other Northeastern states.

MONTPELIER — Gov. Phil Scott at a press conference Thursday addressed the issue of a regional climate initiative, saying he would not support any form of a carbon tax.

“Most of the states in the Northeast, and it’s a number of them, they have a seat at the table to learn more about the initiative — we have to be objective about this,” he said. “But suffice to say, my feelings haven’t changed on a carbon tax. If that is all it is, a carbon tax, then I’m not supportive of that.”

Since his successful 2016 gubernatorial campaign, the Republican governor has made opposition to a tax on CO2 a cornerstone of his political platform. On his campaign website, Scott even criticized former Democratic rival Sue Minter’s support for a regional carbon tax for New England, including her support for a cap-and-trade program.

That regional cap-and-trade program has taken shape recently in the form of the Transportation and Climate Initiative (TCI). The program’s jurisdictions include 12 northeastern states and the District of Columbia. Last December, Vermont signed onto a “declaration of intent” as a starting point for joining the initiative.

Under the current policy proposal, the TCI regional members would set a price on transportation-related carbon emissions, place a cap on the amount of CO2 released from vehicles using transportation fuels, and require fuel suppliers to purchase allowances for every ton of carbon dioxide that results from the fuel they sell. The costs would be passed on to consumers in the form of higher fuel prices.

At the press conference Thursday, Scott said he continues to oppose a carbon tax, and would oppose formal membership in the Transportation and Climate Initiative if it is an equivalent scheme.

When asked at the press conference if the TCI proposes something that ultimately charges for carbon emissions, Scott doubled down on his stance.

“I’m against the carbon tax,” he said. “I just think it’s important not to discount anything — we’re there to listen. Some states are supportive, we’ll see where everyone ends up. We’re still in the learning phase.”

While governors have the final say on whether or not to commit their states to the initiative, Vermont Agency of Natural Resources Deputy Secretary Peter Walke is attending TCI planning meetings with officials from the other jurisdictions and is expected to report back to Scott’s office with policy details as they develop.

A TCI-related document posted on the ANR website states, “Working regionally, Vermont will be able to reduce transportation emissions in a way that keeps us economically competitive with our neighbors.” Some key action items in that document include electric vehicle incentives, expanding investments in transit, and “incentives to influence land-use decisions that lead to decreased demand for single-occupancy vehicles.”

Many of these items are already being promoted by the Vermont Natural Resources Council. Moreover, electric utilities are being required by the state’s Renewable Energy Portfolio Standards to offer financial incentives for electric vehicle purchases.

The Green Mountain State is not formally signed onto the TCI, however, until the governor gives a green light.

A handful of Vermont-specific carbon tax schemes have been pushed at the Statehouse in recent years, but critics have highlighted the increased costs they would have on transportation, heating and energy. One of those attempts was the ill-fated “Essex Plan,” which got panned by conservative critics.

14 thoughts on “Gov. Scott on Vermont’s potential TCI membership: ‘I’m not supportive’ of a carbon tax”