Lately the media has paid some much-needed attention to Vermont’s financial challenges related to unfunded pension liabilities, demographic changes, and labor force at the state level. However, our towns must deal with many of the same and similar challenges. This has not received its due attention.

To help shed some light this important but underreported issue, the Ethan Allen Institute partnered with Reason Foundation to write a report entitled “Towns in Trouble: Assessing Municipal Fiscal Health in Vermont.” 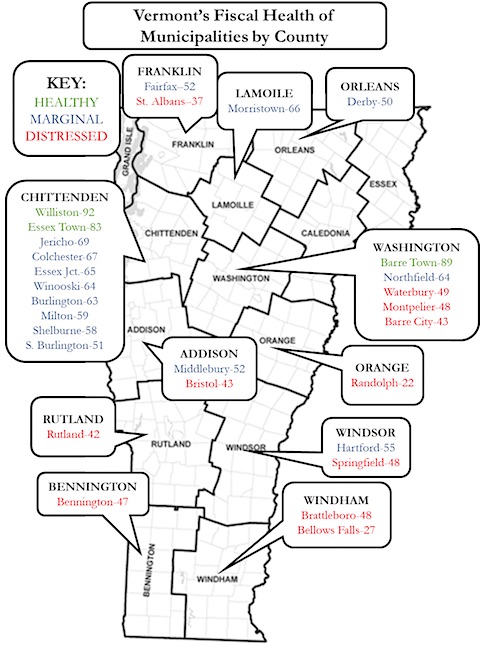 We analyzed 30 Vermont towns for their fiscal year 2018, accounting for 46% of Vermont’s total population. Only four are in excellent fiscal health (scored 70 or above), 16 meet a minimum of fiscal strength (scored 50-69), while 11 are in poor fiscal condition (scored 49 or less). Scores ranged from 22 to 92.

Some of these results were surprising, others less so. Many of the top performers were in Chittenden County, but even there, eight towns were only marginally healthy, and just two were in good fiscal health.

Wealthy Shelburne landed exactly in the middle of the fiscal health rankings, at No. 15, with a 58 score. Lyndon has a median household income that is less than half of Shelburne, and yet it was able to score a 70 on fiscal health, a full 12 points better. So clearly, a high median income does not always equate with a healthier fiscal score.

Randolph and Rutland received two of the worst scores and have been reprimanded by their auditors for “material weaknesses” in their accounting practices. St. Albans also received a poor score, but it is taking active steps to improve and did not have any material weaknesses its auditors identified. Improving accounting practices, as St. Albans has done, may help towns to avoid cutting services or increasing taxes in the long term. But there comes a time when such drastic measures may have to be considered.

In this study, we employ a fiscal scoring system to determine which of Vermont’s thirty most populous towns and cities may be at risk. We also provide a “How To” guide for citizens of smaller towns to discern their town’s fiscal condition. Our methodology is similar to the studies completed by California’s State Auditor and UC Berkeley’s Haas  Institute.  We solicited feedback from over 50 Vermont municipal employees during the course of this project in order to be as accurate as possible.

We determine “fiscal health” by measuring several factors that municipal management has some control over, such as debt costs, savings and pension liabilities. While the ‘Property Values’ and ‘Employment’ categories are less in the control of each municipality, these only accounted for 20 of the 100 points in a score. Most of the differences between towns can be accounted for by the three categories which towns do have some control over.

It has been 124 months since the last US recession, an all-time record. Towns should be shoring up their resources for an inevitable economic downturn, which many economists are forecasting within the next two years.  However, few Vermont towns look especially fiscally resilient, and many are losing population.

Fiscal stewardship, especially at the level of local accountability, should be looked upon as a process of continuous improvement, even for the towns with high scores. Often, Vermont towns aren’t aware of the fiscal precariousness of their situation. Our intention is not to single out poorly performing towns. Rather, we hope to provide all Vermont communities with a new set of signposts for diagnosing their fiscal health in the coming decades, so that they can better serve their residents.