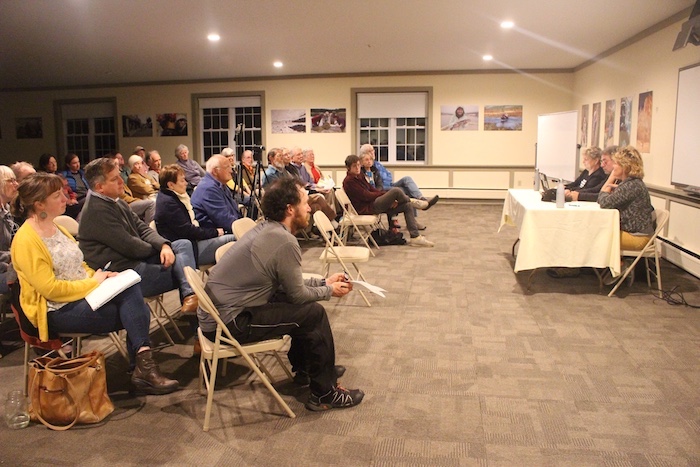 SAVE THE EARTH: Lawmakers from the Climate Solutions Caucus met at Sterling College to discuss turning green energy goals into state mandates.

Of particular interest was the “Global Warming Solutions Act,” which would make Vermont’s ambitious green energy goals enforceable by statute.

The caucus generally holds the view that the world is facing a climate emergency, and that the remedy is to overhaul the state’s energy, transportation and heating energy sectors.

“The New Deal from decades ago and the Green New Deal are all focusing at dramatic shifts in infrastructure and what we prioritize,” Cordes said. “If we think of a budget as a statement of priorities, then what we are wanting to do is create language in statute that has teeth, that will hold us accountable to all of these goals.”

Current climate goals in Vermont are adopted according to the state’s renewable energy portfolio standards. This includes generating 75 percent of electricity from renewables by 2032 and promoting green transportation and heating policies for everyday Vermonters.

Copeland-Hanzas singled out the Global Warming Solutions Act as what she will be pushing the next legislative session.

“That is a bill that is modeled after a law that was passed in Massachusetts, Connecticut and Rhode Island,” she said. “It basically would take our goals, our Paris [Climate Accord] goals, in the short term because Gov. Scott said we will meet our Paris climate goals.”

She said long term goals would be even more ambitious.

She added that the act would be “enforceable by Vermonters and it makes us accountable to Vermonters.”

While the specific renewable energy goals were developed during the administrations of Govs. Jim Douglas, Peter Shumlin and Phil Scott, Vermont is not on track to meet the scheduled deadlines.

“The fact of the matter is we are still falling behind and that’s because these are aspirations, they are not requirements,” Copeland-Hanzas said.

She accused the current governor of inaction, saying Scott’s approach “is to talk a good talk but not necessarily put resources and focus into finding the solutions.”

Troiano noted that some green technologies are still not economically sensible for many Vermonters.

“At this point, my furnace is getting old and I am looking into alternative heat sources,” he said. “And the thing that knocked me back when I go to investigate a cold weather heat pump is not only the cost of the investment, but the annual heating cost projected to run that heat pump. [It] is three times what is being done by wood right now.”

Hardwick Electric board member Gina Campoli, who was a member of the audience, asked about the cost of pursuing the agenda proposed by the lawmakers.

“The question is how do you raise money to fund this stuff?” she said.

Copeland-Hanzas admitted that money is a challenge.

“If we had the magic answer to that we would already be meeting our goals,” she said. ” … The Global Warming Solutions Act will require us to figure out how to find that money because it will say ‘these are your goals, they are now in statute, and we need to design programs to meet those goals.'”

Copeland-Hanzas said some of the initiatives, such as home weatherization, will save money in the long run.

While zero-carbon nuclear energy was briefly mentioned as a solution, Cordes said it’s not on the table. She also said social equity was a goal of new climate legislation.

State Rep. Strong, R-Albany, who is not a member of the Climate Solutions Caucus but attended the meeting, told True North after the event that the green initiatives are going to challenge Vermonters’ individual budgets.

“A lot of us are low-income,” she said. “We just can’t pay more for gas, we can’t pay more for electricity. Farmers are already struggling to even keep their farms going. That’s why our governor has to say ‘wait a minute people, can we live here? Can we afford it?'”