Writer James Lindsay graced the Green Mountain State with an engaging visit on May 12 in Montpelier, Vermont (together with well-matched Professor Nick Meriwether).  Following a remarkable summary of the ideology unpacked in his current bestseller Race Marxism: The Truth About Critical Race Theory and Praxis, Dr. Lindsay presented an award to a Vermont school board member named Elizabeth Cady. 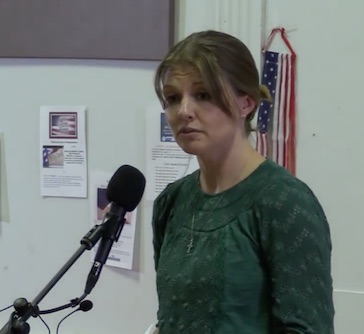 Mrs. Cady, an informed, calm-spoken mother with two children in the Essex Westford School District (EWSD) won her position campaigning “to make the board more accessible and approachable to those who have concerns and criticisms.”  A victim of the very praxis (of slander and hate) described in Dr. Lindsay’s latest tome, Elizabeth Cady was not present to accept the award — because she and her family recently sold their home and relocated to the Midwest.

The EWSD school board was decisively unreceptive to Cady’s “accessible and approachable” initiative: they ganged up and bullied the brave soul, as social justice warriors do.  Groupthink does not broach dissent.

Mrs. Cady’s first transgression was daring to question CRT.  In a public forum with parents in Rutland, Vermont, she presented valid concerns pooh-poohed by Vermont’s most prominent progressive propagandist rag with the title “Watch out for that word equity“:

“We have trusted that the public schools would not insert themselves into our families’ morals and beliefs,” Elizabeth Cady, a member of the Essex-Westford school board, told the crowd of around 70. “Unfortunately, that’s not the case these days. Our public schools are telling us that they know better how to tell our children what’s right and what’s wrong.”

Equity, she said, “seeks to divide people by race to want the same outcome for each group, often using racial discrimination to get it.”

For this truth-telling transgression against the CRT Taliban, Elizabeth Cady attracted the ire of Vermont’s rabid left-dominated media, as well as her fellow board members.  How dare she challenge the cultish orthodoxy?  (Readers may recall that EWSD also fired a high school student lifeguard for similarly questioning CRT, then paid him a salary for the summer to stay home as hush money).  A Kafkaesque complaint was filed against the stalwart Cady:

[Two citizens] allege that Cady “gave the impression that … she would represent special interests or partisan politics for personal gain. … [Due to] her continual campaign of misinformation and contextually inaccurate data, Ms. Cady has made it clear that she does not believe in the district’s equity work, and that she is actively encouraging others to join her in this crusade, which she has made political through this post on a conservative website.

Liz Cady, the wife of an F-35 jet pilot, later surpassed even her husband’s skill and bravery in the skies by daring to speak out yet again, this time against vaccine discrimination.  In a letter published widely, Elizabeth Cady objected to separating people into a desired group versus an undesired one. Ordinary, everyday people are being manipulated to allow hate in this modern-day situation of vaccinated vs. unvaccinated through the use of fear. … The case numbers in red and the rhetoric of our officials are very successful in promoting and continuing fear of this virus. And if we, the ordinary, everyday people, allow this fear to justify hate, that hate will grow exponentially.

Mrs. Cady had specifically provided in her letter that “I am not comparing what is happening now to the horrific genocide that took place in WWII.”  The histrionic reaction of the EWSD despots was ideologically reflexive, if unintentionally ironic:

The essay sparked an immediate backlash online. Essex-Westford Superintendent Beth Cobb wrote on Twitter that she and school board Chair Erin Knox “would like to state unequivocally that nothing in Cady’s article represents the policies or beliefs of our school district.” … One of our roles and responsibilities as board members is to avoid even an appearance of conflict of interest,” Knox said in an emailed statement. “(Cady’s) unsanctioned rhetoric is harmful, and implies a disregard for this responsibility to our students, staff, teachers, families, and community members.” … State Rep. Lori Houghton, D-Essex, wrote on Facebook that she and the rest of the Essex legislative delegation “are appalled by the latest statement from EWSD School Board Member, Liz Cady and unequivocally reject her twisting of historical facts to fit her narrative.”

What was that about crusades and partisan politics again?

Civil rights maverick Elizabeth Cady Stanton may have inspired this modern-day constitutional pugilist.  But following yet more personal attacks, Liz Cady of Vermont decided that she could not raise her children in such a “system” and resigned:

Board leadership’s intolerance of differing viewpoints shows there is no real desire to best represent the entire community, but rather shows they have a narrowly pointed agenda the community must follow. … [C]ultivating an atmosphere of intolerant, political tribalism where dissenting voices from the community are actively blocked and attacked, instead of being afforded the mutual respect of a listening ear and critical thought given to their words.

The treatment of Elizabeth Cady displays the application (praxis) of social justice “theory” described by James Lindsay in his insightful newest book.  It is also why she merited the award he so graciously presented, titled: “Hero with Valor under Fire.”

3 thoughts on “Anti-CRT school board member honored in Vermont”