This commentary is by Liz Cady, a member of the Essex-Westford School District Board.

My interest in World War II began in eighth grade, when I read and presented to my class “The Diary of Anne Frank.” I remember the difficulty in trying to articulate to my 14-year-old peers how ordinary people were part of the horrors of World War II, how a little girl and her family spent her final years hiding and then sent to a horrific death. Now, 25 years later, I would be able to describe far better what happened: fear was used and injected in society in order to allow hate to seem justified, and hate grows at an exponential rate. 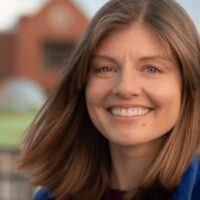 People, understandably, become very combative and defensive when modern day situations are likened to what happened in World War II. People are often too quick to make the comparison, and the murder of millions is unfathomable. How did something so evil happen when there were good people around? Fear. Hate.

I have read many commentaries to VTDigger and comments on news stories (only conservative ones since our mainstream VT media no longer allows users to comment), and a theme I read over and over again is that the unvaccinated shouldn’t be able to clog up hospitals and that unvaccinated nurses and doctors should have to work in their own place where they can care for the unvaccinated.  Then, the vaccinated can attend regular medical facilities without worry or having to wait on the unvaccinated.  But, what if we changed the wording to this:

This kind of rhetoric was used in the years leading to World War II and during. Religion and race were used instead of vaccination status. I am not comparing what is happening now to the horrific genocide that took place in World War II, but I do believe we need to acknowledge the comparison of how that hate started then and how it is happening now: separating people into a desired group versus an undesired one. Ordinary, every day people are being manipulated to allow hate in this modern-day situation of vaccinated versus unvaccinated through the use of fear.

Years of various vaccinations should be evident to every American that vaccinations are not to stop a spread, and breakthrough cases are a testament that these vaccinations are not eradicating Covid-19. Some will claim that this public health crisis makes this situation different, but we have two years of data detailing exactly what groups of people are at risk and two years of data showing the extremely high survival rate, including an extremely high survival rate prior to rollout of the vaccinations. Newscasts and stories focus upon Covid-19 cases, and our elected officials continually lambast the unvaccinated as the problem, despite the extremely high vaccination rate of our state. The case numbers in red and the rhetoric of our officials are very successful in promoting and continuing fear of this virus. And if we, the ordinary, every day people, allow this fear to justify hate, that hate will grow exponentially.

If the sign “This brave little state says no to hate” is true, then it starts with refusal to put people into separate categories, no matter what race, religion, ethnicity, creed, sex, or vaccination status.  Saying no to hate means treating everyone as a person deserving of love, respect, freedom and happiness.

As a transplant to Vermont, and someone who embraced this state and what I thought it stood for, I have been alarmed, disappointed and overwhelmingly saddened to see that many people in this state embrace fear and close their eyes to the hatred it creates.

31 thoughts on “Liz Cady: Saying no to hate means treating everyone as a person”