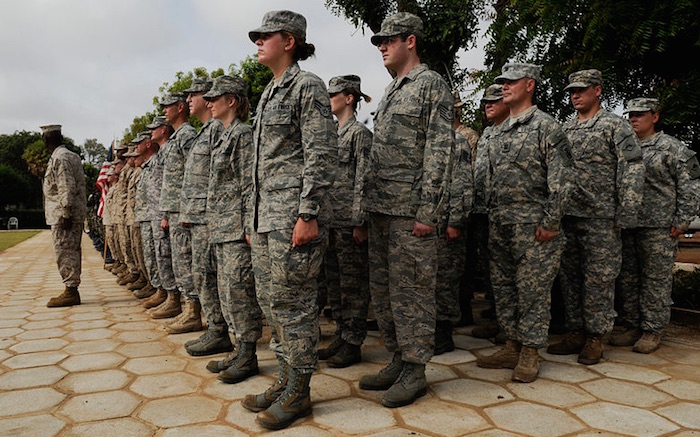 SEEN AS A POTENTIAL THREAT?: At least one Democrat U.S. House member has suggested that U.S. National Guardsmen should be scrutinized as a potential security threat.

About 25,000 National Guard troops were in Washington, D.C., on Wednesday to provide security for the inauguration of Joe Biden, but first the members had to suffer the humiliation of being vetted by the FBI as potential security threats to the United States.

Vermont was among the states that sent soldiers to the nation’s capital this week, dispatching about 100 National Guardsmen. But some Democrats expressed worries, without evidence, that the troops might turn against the country and launch a coup attempt.

“The Guard is 90 some-odd percent male, and only about 20 percent of white males voted for Biden,” Rep. Steve Cohen, D-Tenn. recently told CNN. “You’ve got to figure that in the Guard, which is predominantly more conservative … they’re probably not more than 25 percent of the people there protecting us that voted for Biden. The other 75 percent are in the large class of folks that might want to do something.”

Acting Secretary of Defense Christopher Miller told USA Today that the government is planning to process at least 25,000 guardsmen, even while admitting there is no specific threat.

“While we have no intelligence indicating an insider threat, we are leaving no stone unturned in securing the capital,” Miller said.

As for Biden’s own security detail, the Department of Homeland Security reportedly will bypass the National Guard and hire Hana Industries Inc. for $1.6 million.

Capt. Mike Arcovitch, state public affairs officer for the Vermont National Guard, told True North that all Vermont’s guard members have been vetted by the Pentagon and FBI and are being retained for inauguration duty.

“All the Vermont soldiers at this point have been processed and none have been sent home,” he said. “Our team will work closely with law enforcement if there’s any identification or anything whatsoever that needs to be looked into. Out of an abundance of caution we automatically pull those persons off the line and make sure that they are not part of the mission.”

On Tuesday, two National Guardsmen were removed from the inauguration for alleged “ties to far-right fringe groups,” and on Wednesday another 10 were removed. Nonetheless, the Associated Press reported “no plot against Biden was found.”

The nation’s capital has been on edge since Jan. 6, when a mixed mob of Trump supporters, BLM radicals, Antifa, Oath Keeper members, and anti-Trump Boogaloo extremists breached the U.S. Capitol. The Department of Justice has started charging specific individuals for a range of violent acts. While politicians, including most of the Vermont General Assembly, attempted to blame former President Donald Trump for inciting the riot, the FBI admitted to The Washington Post that top intelligence officials were aware of violent plots against the Capitol days before the event.

Asked if the FBI had any reasonable suspicions for vetting Vermont National Guard members for anti-American extremists, Arcovitch declined to comment, but said, “I can’t speak much other than our guys have been looked into and there’s no issues.”

Vermont state Rep. Carl Rosenquist, R-Georgia, who served in the U.S. Army Corps of Engineers and spent a year in Vietnam as a combat engineer before later retiring as a lieutenant colonel in 1994, told True North he is disgusted by the treatment of the servicemen.

“As a prior active duty person having served in the Army, I took my oath to uphold the Constitution and follow the orders of my superior officers up to the president. And as an ex military officer, I’m appalled that the people who took the oath would be re-put through a vetting process to determine if they had any alien thoughts. I just never heard of it before, it’s just unprecedented,” Rosenquist said.

Members of Gov. Phil Scott’s administration did not return True North’s request for comment on the controversy. However, Texas Gov. Greg Abbott, a Republican, said Monday he considers it offensive for the government to treat National Guard troops like potential domestic terrorists.

“This is the most offensive thing I’ve ever heard,” he wrote on Twitter. “No one should ever question the loyalty or professionalism of the Texas National Guard.”

This is the most offensive thing I've ever heard.

No one should ever question the loyalty or professionalism of the Texas National Guard. @TexasGuard

I'll never do it again if they are disrespected like this.https://t.co/STZDMz7PGm

Fox News host Tucker Carlson said on Monday that 25,000 troops is more than double the troops in Washington during the 1968 Race Riots that burned much of the city into rubble while killing 13 Americans.

“According to our current leaders the so-called insurrection of Jan. 6 was much worse than any of that,” he said. “So in response, they have assembled the largest military presence in Washington in all of American history during peacetime. It’s truly a national force, with Guardsmen from every state in the Union as well as Puerto Rico. The question is, why?”

On social media, one commenter called for Gov. Scott to speak out about this treatment of Vermont soldiers.

@GovPhilScott were Vermont National Guard Troops disrespected like this too? https://t.co/TwhKx2qUQe

Another Twitter user commented that it’s not the National Guardsmen that security should be vetting, but “the other way around.”

The FBI is vetting the National Guard? We all know that it should be the other way around.