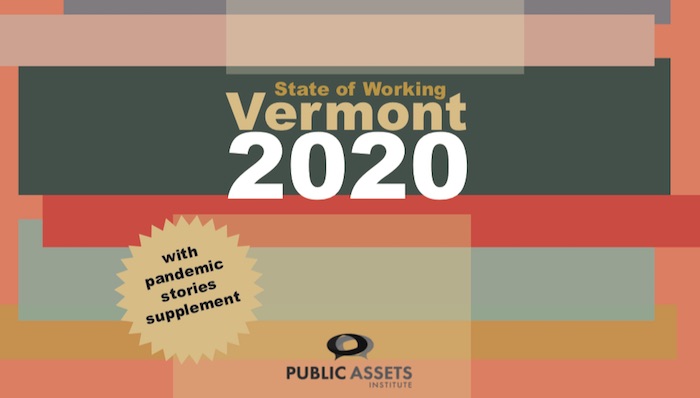 “State of Working Vermont” report by the Public Assets Institute

The Public Assets Institute (PAI) recently released a report, “The State of Working Vermont 2020,” which provides a good overall picture of the economic stagnation Vermont has experienced over the past several decades:

Given that timeline, it’s worth noting 1994 was the last time Vermont Republicans held a majority in the state Senate and 2000-2004 was the last time the VTGOP had a majority in the House. While two Republican governors served for 12 years over this period, Douglas and Scott, governors can’t sign any laws not passed by both chambers of the Legislature. In other words, conservatives have never been in a position to put forward and pass any policy initiative.

During the recovery after the Great Recession, Vermont’s economy grew half as much as the nation’s: 11.2 percent vs 22.2 percent, after adjusting for inflation. With the exception of Massachusetts, New England as a region also underperformed the U.S.

What do all of these New England states have in common? They are all, with the sometimes exception of New Hampshire, run for the most part by progressive liberals.

Now, Vermont has, and has had, one of the most progressive tax structures for income and property taxes in the nation. We have, and have had, one of the highest minimum wages. Logical conclusion: Policies like this do not solve income inequality and may, in fact, exacerbate it.

The nation’s longest recovery left Vermont with fewer workers. In 2019, 342,226 Vermonters were working or actively looking for work—11,500 fewer than in 2007.… The share of people of prime working age—35 to 54—shrank. And workforce participation dropped. These factors helped make Vermont one of 11 states, including three in New England, whose labor forces shrank between 2007 and 2019.

Since 2006 we steadily expanded government universal pre-school programs, have engaged in public funded healthcare access programs such as, going back to the early 1990’s “guaranteed issue” and “community rating” and more recently Catamount Health and now OneCare. We have one of the most generous welfare programs in the nation. And, we recently started paying people up to $10,000 to move here. Vermont has also branded itself as a “green” Mecca, putting considerable resources into renewable energy and related environmental programs. Conclusion: these kinds of programs do not seem to attract young, working age people to our state, as politicians promised they would.

At the end of the recovery, Vermont didn’t have much to show for its efforts to reduce poverty. The poverty rate came back down after it shot up in the Great Recession. But by 2019, there were just as many Vermonters in poverty as in 2007: more than 60,000.

We’ll just let that one speak for itself.

If you care about these issues specifically — reducing income inequality, alleviating poverty, and solving Vermont’s demographic and workforce problems — and for broad economic prosperity generally, we must stop doing the same things while expecting different results. As PAI demonstrates, this experiment in high taxes, government micro-management through excessive regulation, and lots of spending on fine-sounding programs important to politicians but, in practice, not the people has been a failure. PAI doesn’t reach that conclusion themselves, but it’s the obvious one.