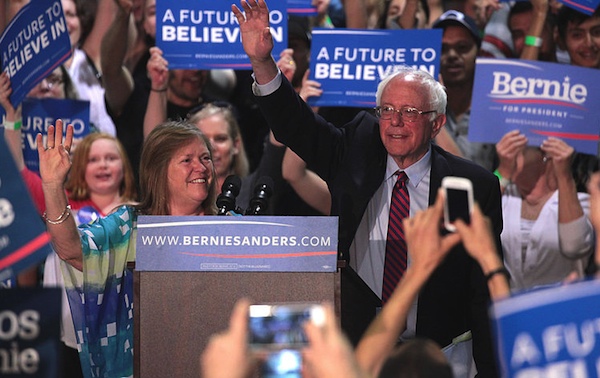 The Vermont GOP demanded Sunday that Independent Vermont Sen. Bernie Sanders release “all investigative material” related to the investigation of a land deal connected to his wife.

Sanders, a leading contender for the 2020 Democratic presidential nomination, has called for release of the “whole damn report.” Attorney General William Barr released a summary indicating that special counsel Robert Mueller found no evidence of Russian collusion by the Trump campaign.

“I call on you to apply this same standard of transparency to yourself. Under your proposed standard, surely you would agree that all investigative material related to the criminal bank fraud investigation involving you and your wife should be released,” Vermont GOP chairwoman Deborah Billado wrote in a letter to Sanders Sunday.

Vermont GOP vice chairman Brady Toensing took things a step further by suggesting Sanders had misused his office to help the college when his wife was president.

“The shame is that we’ll never find out the full story, there will be no special prosecutor report and Sen. Sanders refuses to answer questions about pressure his office put on the bank to issue this fraudulent loan,” Toensing told The Daily Caller News Foundation over the phone Tuesday.

Sanders has denied the allegations and tried to minimize them by pointing out that Toensing was involved with the Trump campaign, reported The Burlington Free Press.

Sanders’ wife Jane O’Meara Sanders was accused of bank fraud by Toensing related to a 2010 land deal she made as the president of the now-defunct Burlington College in Vermont. The senator has dodged questions on the issue for years, whether talking to MSNBC’s Chris Hayes or setting up an interview with local media. Sanders’ then-spokesman Jeff Weaver said in November 2018 that the federal investigation had been dropped.

Weaver issued the following statement according to Vermont Public Radio:

Jane Sanders has been informed that the U.S. Attorney in Vermont has closed its investigation of the Burlington College land deal and has decided not to bring charges of any kind.

Jane is grateful that the investigation has come to an end. As she has said from the beginning she has done nothing wrong and Jane is pleased that the matter has now come to a conclusion.

“Unlike President Trump, who was categorically and publicly exonerated by the investigation, you and your wife received no exoneration, public or otherwise,” Billado’s letter continued. “Indeed, the only evidence that there was even a declination of prosecution is a statement by your paid spokesman saying so. Therefore, we also call on you to reveal any documentation evidencing a declination to bring criminal charges and all correspondence between your lawyers and the investigating authorities.”

The controversy had to do with the tiny college’s $10 million purchase of a 32-acre property in 2010, reported The Burlington Free Press. Jane Sanders resigned citing “different visions for the future” from those of the college’s board ten months later in October 2011. She had been hired in 2004 to help turn the college around.

The property deal that brought down the college cited a list of donations that “included $2 million that never materialized,” according to The Burlington Free Press. The listed donations included $1 million over seven years from a woman named Corinne Bove Maietta, who later said she had not agreed to donate that amount. Instead, she said had given $100,000 and agreed to a bequest upon her death of an unspecified amount.

“You can’t borrow money on the future,” Maietta, 83 at the time, told VTDigger. “That doesn’t exist.”

Maietta said in 2017 that she had recently been interviewed by an investigator with the Federal Deposit Insurance Corporation (FDIC) about her donation to Burlington College.

TheDCNF reached out to Sanders’ office about the Vermont GOP’s letter but did not receive a response at the time of publication.