The incident occurred at a well-attended, publicly-warned hearing in the hall of the House of Representatives on S.169, the Senate firearms bill. Rep. Grad reportedly told the shocked audience that the flags were “banners” and thus were unacceptable expressions of support for one side of the issue. 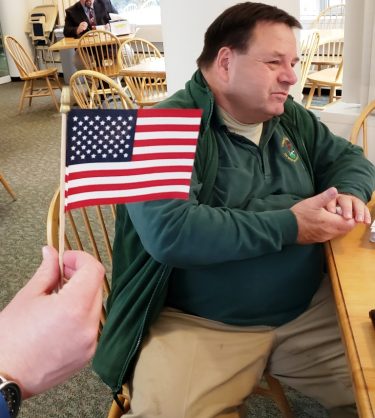 When the hearing began, the committee set ground rules for public comment that included “no displays in favor,” vice-chair Tom Burditt, R-West Rutland, said Wednesday morning. In the past, such rules have been interpreted to mean clapping, calling out, and waving large banners. Silently waving small American flags while seated was permitted at the Senate hearing in Randolph last month, gun rights organizers said this morning.

According to several people who attended the hearing, some opponents of S.169, while seated, began to quietly wave small American flags  in support of testimony supporting gun rights. Chair Grad announced that the flag-waving needed to stop because these flags were “banners.” She banged her gavel several times to emphasize the point.

In response, gun rights activist and military veteran John Des Groseilliers, of Hardwick, stood and pointed at the American flag that hangs in hall, to which the representatives pledge allegiance every morning, and said “that’s a banner.” Des Groseilliers, a funeral home director, is a U.S. Army Reserve Ambassador and a 2018 recipient of Army’s Public Service Commendation Medal, bestowed civilians for service to Army personnel.

The reverberations of Grad’s decision were on display this morning, in a tense Statehouse cafeteria exchange over the incident between Rep. Burditt and gun rights activist Evan Hughes.

“My father fought for that flag in three theaters,” gun rights activist Chris Bradley said in a Statehouse conversation Wednesday morning. “I am not a happy camper.”