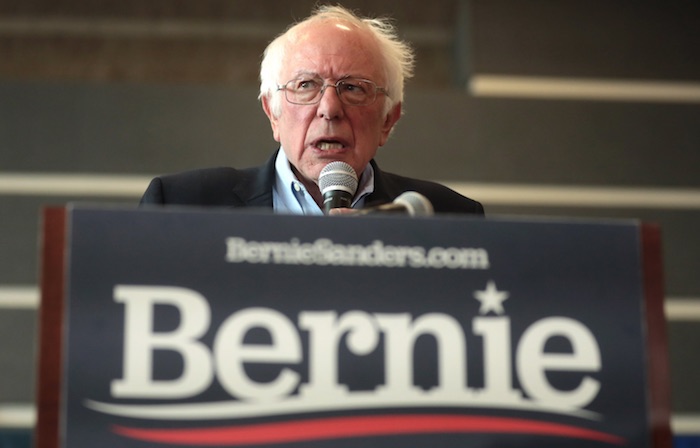 ON THE HOT SEAT: 2020 presidential candidate Bernie Sanders is under a microscope now that he is the perceived front-runner in the Democratic primaries.

With a couple of big Democratic primary wins under his belt, presidential candidate Bernie Sanders is facing increased scrutiny from other candidates, and now the Vermont GOP is calling for the senator to release his health and tax records.

VTGOP Chair Deborah Billado this week issued a statement calling for transparency, noting that Sanders, at age 78, could become the oldest U.S. president in history.

“At 78 years of age, Bernie Sanders would be the oldest president to be elected in the history of the United States,” she said. “Yet, despite his past promises, Sanders refuses to release his comprehensive medical records.”

Last fall, Sanders suffered a heart attack. According to reports he was diagnosed with a “myocardial infarction” and two stents were placed in a blocked artery.

U.S. presidents are estimated to age twice as fast as the average population due to the high levels of stress involved in the job. Billado said she isn’t sure that Sanders’ health is ready for that challenge.

“The refusal by candidate Sanders to release his medical records should be concerning in the minds of all Americans,” she wrote. “Potential voters are rightly asking themselves: ‘What is he hiding?’”

Regarding taxes, Billado says that Sanders should release his 2019 tax returns as soon as possible. She said since Sanders criticizes rival presidential candidate Michael Bloomberg for being a billionaire using his money in politics, it’s only right that he be transparent regarding his own wealth.

“It is notable that Sanders’ previous attacks on ‘millionaires’ have been replaced by his emphasis on ‘billionaires’ — perhaps due to the immense wealth he has successfully accumulated in the capitalist economy he is all-too eager to disparage,” she said.

The senator’s returns even prompted a tweet from President Donald Trump, who believes Sanders took advantage of the GOP tax cuts he often criticizes.

Bernie Sanders and wife should pay the Pre-Trump Taxes on their almost $600,000 in income. He is always complaining about these big TAX CUTS, except when it benefits him. They made a fortune off of Trump, but so did everyone else – and that’s a good thing, not a bad thing!

Billado added that few Americans are able to own three homes, as Sanders does in Burlington and Grand Isle. She also wants Sanders to release the names of the charities that he says received 100 percent of the proceeds from his 2011 book.

Sanders is under pressure this week after saying it was “a good thing” that the late communist Cuban leader Fidel Castro taught people to read and write, and that China’s government has “taken more people out of extreme poverty than any country in history.”

Sanders is a self-described “democratic socialist” and is proposing major changes to social services, including a Medicare for All proposal that could cost taxpayers over $30 trillion.

During a recent State of the Union speech, Trump famously addressed the rising influence of socialism within the Democrat Party platform. While he didn’t mention Sanders by name, the media was quick to focus in on him during the speech.

Bernie Sanders with all the socialist feels when Trump breaks it to him that America will NEVER be a socialist nation… pic.twitter.com/XSuBIeEOYn