Vermont’s Act 166 is the law under which parents and guardians are provided universal access to publicly funded pre-K education. Universal pre-K advocates tout the state’s approach to early education because of its alleged benefits to young children, especially those from low-income families.

But getting kids to and from state-based preschool may be creating a problem for young children who use the state’s busing system, according to some observers.

“Drivers are not allowed by law to let the pre-K kids off the buses unless a parent is there to collect them. The parents aren’t showing up and are using the buses as babysitting services, with the kids simply driving around town from after school until after 6 p.m.,” a Rutland resident who witnessed the issue told True North, speaking on condition of anonymity. 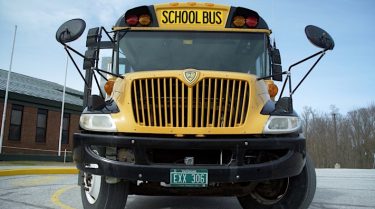 When it comes to transportation and students, bus operators have the ultimate responsibility for young children waiting on buses for their parent’s arrival. By state guidelines, employers of drivers bear the responsibility of passengers. If parents are tardy in picking up their children, bus drivers won’t drop kids off, or leave them to the elements.

Bus drivers, however, carry the full weight of responsibility when it comes to their commercial driver’s licenses (CDLs).

Transit companies have responsibilities, too. Not only are they required to have drug testing programs in place for drivers, but they also must see that their employees attend a school bus driver clinic. A bus clinic covers driving skill as well as a review of scenarios that follow best practices — namely, those procedures that are typically accepted as being safe and effective.

In Vermont, school bus CDL drivers are trained to operate short and long school buses. Driver training starts in the classroom with the study of state transportation and highway rules, as well as bus-specific safety procedures. To complete their training, drivers must pass exams designed for the CDL operator to safely and responsibly drive the bus.

While there is no specific statute requiring bus drivers to stay with children when a parent fails to show up at the bus stop, child safety laws still apply.

Regarding young children being left on buses, former state Rep. Dave Sharpe, a Democrat from Bristol and the former chair of the House Education Committee, told True North he hasn’t heard of any problem.

When True North contacted the Vermont DMV to inquire about the issue, the department had no record of complaints.

“This is the first we have heard of this being an issue. I have not had any reports of this,” Patrick McManamon, a highway safety specialist with the DMV’s Enforcement and Safety Division in Montpelier, told True North. “That being said, because policies and procedures are often the responsibility of the school district and their transportation provider, I may not necessarily hear of an issue.”

“In the clinic we talk about dropping off and picking up students. This section is based on best practice, not state law,” he said. “Vermont motor vehicle law does not mandate a specific procedure for a drop-off or pick-up, unlike a railroad crossing.”

McManamon also said that “best practices” make sense because every school bus stop location is different and presents its own set of circumstances.

“Vermont does not, by statute, require a driver to keep a child on board until a parent arrives, though best practice would be not to allow the child to leave until such time as a responsible person arrives,” he added. “This may also be covered by the school district and/or the transportation provider’s policy and procedures.”

Rutland City Public School Assistant Superintendent Rob Bliss said there are instances when pre-K kids spend long periods on buses waiting for parents, but it is necessary for safety purposes.

“To describe this as a problem is a mistake — it’s the law, it’s a child care regulation,” he told True North. “You cannot release a pre-K kid into the streets; they have to be delivered to an adult who either we know or who signs them out. … Now, some people paint this as an inconvenience, but it’s a regulation intended for child safety.”

“I will tell you that this doesn’t happen a lot, but when it does occur it’s mostly in the winter when it’s dark, when people don’t want to put on a coat and stand in the cold waiting for the bus,” Bliss said. “The driver’s and school’s responsibility is part of the Family Support and Safety Services law as outlined by the Agency of Human Services.”

To those who may worry the state’s busing system is being used as a babysitter for tardy parents, Bliss says it’s not the case.

“To paint bus drivers as unfortunate babysitters is just wrong. The truth is that drivers are caring people and they are responsible for the children,” he said. “If a parent doesn’t come out (to get the kids), the driver will call dispatch to call the child’s house. And then if the parent doesn’t come out, the driver goes around the block or goes on with the route. If the parent still doesn’t show, the children are brought back to school and then released back to the care of the school.”

Lou Varricchio is a freelance reporter for True North Reports.

6 thoughts on “Pre-K kids being left on Vermont school buses — how big of a problem is it?”