Southern Vermont conservatives gathered under a big canvas tent in Danby on Saturday for the state’s first “Liberty Fest,” a day-long event that brought together patriotic-minded activists, interested voters and a variety of special-interest groups. 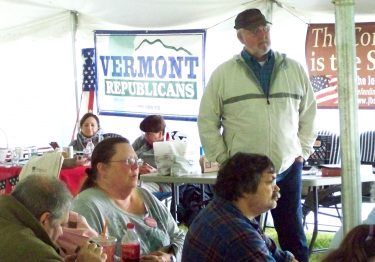 Held at the Otter Creek Fun Center located on U.S. Route 7, the event was hosted by the 802VT Alliance and included picnic food, creamies and old-time music played by a DJ.

Despite an overcast sky and intermittent rain, attendees enjoyed meeting fellow voters as well as citizen and political organizations, including gun owner rights groups, pro-life groups, and the Rutland County and Vermont Republicans.

McClaughry was the honorary keynote speaker. He was a former Vermont state senator and an original sponsor of Act 250.

Act 250 at the crossroads

McClaughry told attendees that he’s probably one of the last active members of the 1969-70 Vermont legislative sessions which passed Act 250, the state’s land-use law. Since that time, the law has created both controversy and uncertainty among private land owners, environmentalists and developers. 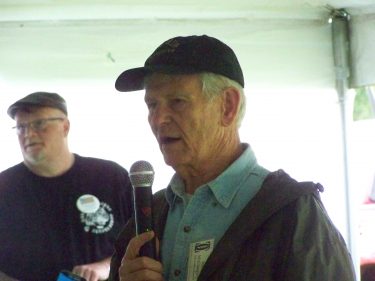 John McClaughry: “It’s transparently clear that the driving theme is state regulation of as much land-related activity as can be swept under Act 250, to assure that our march to become the Perfect Little Climate Conscious State continues unabated.”

“I could give you a three-hour-long law school speech about Act 250, but we don’t have time today,” McClaughry said. “Act 250 passed the House without a roll-call vote. It was overwhelmingly fast. In fact, I voted for it. Back then the governor was concerned about a real-estate development boom that threatened the southern part of the state, in Dover and Wilmington. It was a slap-dash project with no sewage proposal and roads pushed through the woods. Well, the late Jim Jeffords helped draft Act 250 over a weekend and it dared to mention the word ‘property’ in the first draft.”

McClaughry cautioned that while he supported Act 250 at the start, it has outgrown its founding intentions.

“Act 250 did a lot to support the state-land use plan and I had something to do with the Vermont Natural Resources Council losing its IRS tax-exempt status for a few months,” he said. “In fact, I got a threatening letter from VNRC’s driving force, Attorney Jonathan Brownell, about me interfering.

“I wrote him back: ‘Save your threatening letters for widows and orphans.’ Well, I never heard from him again. He moved to England in 1995 to tell them how to do land-use legislation. I’ve since sold all my British bonds and stocks.”

McClaughry recounted that Vermont was more conservative in those days, but now “the panic of climate change has crept into Act 250. Back in the 1970s, we worried about the coming of a new Ice Age.”

He added that he is concerned about how the Vermont Natural Resource Council has become the “driving force” to revise Act 250 and move Vermont on toward a utopian “Perfect Little State” with an unrealistic climate change agenda.

“It’s transparently clear that the driving theme is state regulation of as much land-related activity as can be swept under Act 250, to assure that our march to become the Perfect Little Climate Conscious State continues unabated,” McClaughry said.

The speakers and guests also discussed the pending global climate strike that kicks of on Friday, Sept. 20. That date will kick off a week of planned civil disobedience across the state and nation, led in part by high school students guided by special interest groups and activists like 350 Vermont.

McClaughry predicts the actions to take place that week will be aggressive and mean-spirited.

“It will not be merely speeches, protest signs and posing for the media, but it’s going to make other people pay for their indifference to climate action. It will mean civil disobedience, disruptions and breaking the law,” he said.

McClaughry concluded that the Act 250 update will be coming in January, and that everyone’s personal property rights are at stake. 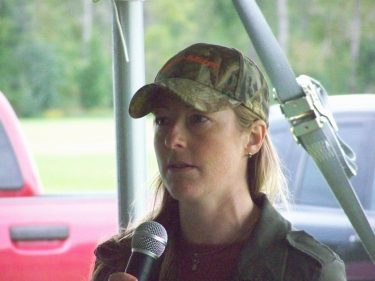 Vermont farmer Kate Bowen says she is concerned about the plight of agricultural and forestry industries in the state.

The plight of farmers

Following McClaughry, Vermont farmer and activist Kate Bowen of Putney shared her thoughts on matters that concern a majority of the state’s farmers and foresters.

“Our farm and forestry industries are on life support,” Bowen told Liberty Fest attendees. “Without conservative dominance in state government we have a grim future.”

“It’s my one-woman rebellion against big government …  (and) an act against the globalist chains of bondage (because) when only the rich and powerful control our food and land, we have lost our independence.”

She warned that “farmers know” the political left in Vermont is mandating regulation “under the guise of environmentalism, social justice and economic fairness.” She said the state is “normalizing the concepts collectivism that would make Stalin proud.”

“True patriots should defend food freedom as fiercely as they do the Second Amendment,” Bowen said. “Tyrannical elites are dictating how we use our land…”

Bowen said that the political attack on farmers extends even to Hollywood, where films portray them as hayseeds and racists.

“Vermont farmers are frustrated. We’re not going to stand for being manipulated any longer,” she said. “Some of us have taken our children out of (public) schools while becoming more involved in town government. We see raw sewage from municipalities flowing into our rivers yet the Vermont farmer is to blame. … Proud farmers are selling off their herds while hipster farmers get tax dollar-funded grants so they can dabble in ‘ag’ without dipping into Daddy’s trust fund.”

After concluding her remarks, two attendees spoke out and encouraged Bowen to run for public office in 2020.

She replied that most citizens are too busy to run for office and serve in the Legislature, but that she would do “what God and Vermonters want.”

Rutland resident Malcolm Bliss, one of the founders of 802VT Alliance along with de Bruin, said the election of 2016 spurred him into getting more involved with the growing citizens group.

“We hope to have Liberty Fest 2020 here next year,” Bliss said. “This event has been a trial balloon of sorts to see how much interest there is out there — and let me say there has been a lot of interest in Liberty Fest. We’ve been in touch with over 570 Vermonters mostly via Facebook. We also placed a paid advertisement in the Rutland Herald this week which has helped bring more folks out to this event. We’re getting there little by little.”

He added: “Many Vermonters are fed up with what’s going on in Montpelier. And we’re going to be part of changing the direction there. We need a fiscally responsible state government that is responsive to the people, not the elites.”