Vermont’s vaccination program isn’t enough to stop the pandemic, lawmakers and health care providers said at a press conference Monday evening. Their demand for a new state of emergency and universal mask mandate got the cold shoulder from Gov. Phil Scott on Tuesday.

“If I thought a state of emergency would be helpful, I would impose it,” Scott said at his weekly press conference.

Scott and his staff have not heard the public clamor for more restrictions, he said. 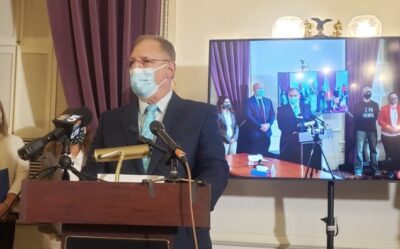 Representative and nurse Mari Cordes, D-Lincoln, and Rep. Dr. George Till, D-Jericho, were asked by Vermont Daily Chronicle at Monday’s press conference, “VT has 89% vaccination and yet we’re the highest two week average in the nation. Gov. Scott wants to stay the course with the vaccine program. Is the state’s vaccine program not working?”

“I don’t think a vaccination-only program is working,” Cordes said.

Till added that claiming Vermont has an 89% vaccination rate is misleading because that number refers only to vaccine-eligible Vermonters. The ‘real’ number is probably in the 70’s, he said. “We need a vaccination program of overall 90% vaccination, including kids.”

Cordes, Till, Dartmouth public health expert Anne Sosin, and others said Scott should impose a universal mask mandate for all indoor workplaces and public places. The mandate would stop when transmission rates drop, she said.

“It doesn’t close/lockdown anything, it’s a way of preventing outbreaks in our workplaces and other settings,” Sosin said. “Mask policies give us time until we can vaccinate kids and boost high risk groups and reduce impacts we are seeing in health systems, schools, and businesses.  Vaccines still work well, but kids under 12 can’t get them yet (soon!).”

In defense of his administration’s reliance on vaccination, Scott said “this is still a pandemic of the unvaccinated.” He said 50,000 Vermonters are unvaccinated. Noting that both cases and hospitalizations are 3.8 times greater among the unvaccinated, “you can see that vaccination is working,” the governor said.

For the first time in three weeks, the rate of cases and hospitalizations grew faster among the unvaccinated than the vaccinated last week. Commissioner Levine had no information about October fatalities. He also said he is unaware of any fatalities among people who have received the boosters.