In the wake of George Floyd’s death by the knee of a Minneapolis police officer one month ago, activists across the nation are urging police departments to defund or even disarm. Two police departments in Vermont have responded differently to such demands.

The Burlington Police Department has responded by proposing $1.1 million in cuts to its budget at the request of Mayor Miro Weinberger. Of that money, $300,000 would go to social services and the rest would cover revenue shortfalls caused by Gov. Phil Scott’s coronavirus-related economic shutdown.

The Brattleboro Police Department, on the other hand, has not announced any cuts, but instead will review its 2022 budget and allow voices from outside the department to contribute to the conversation.

According to acting Burlington Police Chief Jon Murad, the budget Weinberger submitted shouldn’t prevent the force from doing its job.

“The budget submitted by the mayor provides for a 10% cut to the BPD budget,” he told True North in an email. “We worked with him and it is a fair budget largely necessitated by COVID-19-associated revenue projections. It does not contain cuts of any officers. It puts the BPD on a razor’s edge for maintaining services, but it still allows us to keep people safe.”

Murad said some activists are calling for 30 percent cuts, which would limit the department’s ability to effectively police the community.

“Thirty percent cuts means firing as many as 18 police officers,” he said. “Because of contractual rules, it means firing our newest officers, who are diverse, well-trained, optimistic and motivated by a deep desire to serve. Becoming a 75-officer agency also means ending most or all of the positions BPD has created over the years to do more than mere 911 response.”

He added that extra police services can include crime prevention and dealing with people who have disorders before an emergency occurs. He said dramatic cuts would require the potential loss of extra community foot patrols, school resource officers, the domestic violence prevention officer, a community affairs officer and the emergency response officer.

“Cuts mean pulling back many of these positions,” Murad said. “A 30% budget reduction will erase the last 20 years’ progress in community policing. It will send us back to reactive 911-driven policing rather than proactive community engagement that provides prevention.”

The Burlington Police Department’s use-of-force techniques came under scrutiny recently after three separate incidents on camera showed suspects getting injured during arrests. In one altercation in March 2019, a local resident died three days after a confrontation by a police officer. A review determined that the arresting officer was not at fault.

In two non-fatal incidents in September 2018, Mabior Jok and Congolese immigrant Jérémie Meli, both black men, were arrested in separate back-to-back altercations. Police bodycam footage of the incidents fueled debate over whether police use too much force.

But Brattleboro, located in the southeastern part of the state in Windham County, has not caved to pressure to defund. Police Chief Michael Fitzgerald told True North that the town is setting up a special committee to take a look at the fiscal year 2022 budget. 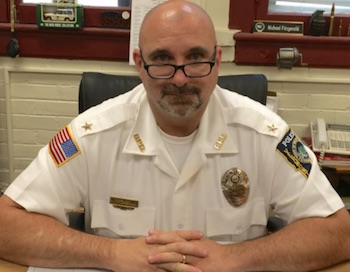 “We’re going to have representatives from across the community and basically to see how we can make the department better,” he said.

Fitzgerald added that he’s open to a broad review of how money is allocated.

“I think that everything should be looked at,” he said. “If that’s what the community wants, I think that is a function of the governing body to look at the budget as a whole and say, ‘OK this is how much we want to fund human services, this is what we want our police department to look like.’ I think it’s a big conversation and I think they need to look at the big picture.”

Fitzgerald said that part of his department’s strategy in dealing with social justice issues is keeping good communication with those groups.

“We talk to a lot of different groups, that’s for sure,” he said. “Brattleboro has a lot of grassroots organizations that we are constantly in contact with. We have representation with the Community Equity Collaborative, we have representation on the Diverse Workforce Committee, so yeah we make ourselves available to anybody that wants to have a conversation.”

Fitzgerald said he is not in favor of disarming the police, however. The call to disarm police has been suggested by some radical activists. Last year a city council member in Burlington also advocated for taking guns away from officers.

“That certainly has been talked about across the nation, and yeah, I’m obviously against that,” Fitzgerald said.