BURLINGTON — The latest release of police body camera footage appears to benefit the officer who got into a physical confrontation with a local man who died days later.

On March 11, Burlington Police Officer Cory Campbell interacted with Douglas Kilburn, 54, at the University of Vermont Medical Center. After the men exchanged punches, Kilburn returned to his home with injuries, and died days later.

Before a judge ordered Campbell’s body camera footage to be released on July 1, the public only knew of the police officer’s blows to Kilburn. Chief medical examiner Steven Shaprio ruled the death a homicide.

However, the video showed that Kilburn twice punched Campbell in the face first, forcing Campbell to retaliate in apparent self-defense. 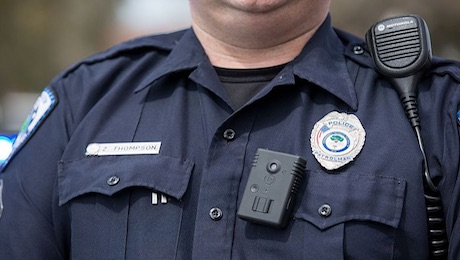 BEING WATCHED: Body-cam footage has changed the way policing is held accountable, and the public too, because people know to be more accountable for their actions when they know that they are being recorded.

The video also shows some of the events leading up to the altercation. Kilburn is starting to leave the hospital when Officer Campbell curses at him to get moving, at which point Kilburn gets irate and gets back out of the car. Then the physical altercation began.

The footage was not initially released because the city and the police department did not approve the release. It wasn’t until the Burlington Police Officers’ Association won a public records lawsuit against the city that the footage was made public.

The footage shows two different interactions between the two men on the same day. Campbell received a call from the hospital after Kilburn became confrontational. Campbell arrived and de-escalated the situation. The men even shook hands after the whole ordeal.

While the Vermont State Police did an initial investigation, the Attorney General’s office is doing a final review before determining if there will be any charges against Campbell. In the meantime, Campbell has been on restricted duty, meaning he’s not able to do all his usual work out in the community.

Research has shown that the advent of body camera technology has had positive effects on law enforcement, both for the police and the public. Arizona State University did a study in 2014 that determined that officers who wear cameras end up making more arrests with fewer complaints from the public.

The same study found that officers wearing body cameras were more likely to engage with the public in positive interactions and have improved community relations.

A 2018 article in the National Institute of Justice cites Sir Robert Peel, the “father of modern-day policing,” who emphasized the importance of maintaining trust between the public and police.

Ali Dieng, city councilor for Ward 7, also noted that the cameras seem to help protect both the public and the police alike.

“Sometimes it’s not only about what took place but also how do we defend and protect our officers,” he said. “This is a way to protect them from accusations, if those body cameras work right then definitely many things will come to light if they are made public and the community will have a better understanding of the specific situations because those body cameras work.”

Meanwhile, the city is in the process of forming a special 15-member committee comprised of police, city leaders and social justice activists who will review police tactics.

Dieng, who voted against the creation of a special committee, said the police department should be coming up with the initial policy review and proposals.