Guy Page is affiliated with the Vermont Energy Partnership, the Vermont Alliance for Ethical Healthcare, and Physicians, Families & Friends for a Better Vermont.

Roisman was talking up a July 1 PUC report urging a “wartime footing” approach to getting Vermonters to buy electric vehicles (EVs) to meet Vermont carbon reduction goals. reduce carbon emissions from transportation. Roismann had spent the first 15 minutes of the show calling criticism of EV cost and range a “myth” and “fake news”. Thanks to a $7500 federal rebate many models are cost-competitive, he said. EV’s simpler mechanics and electric ($1.50/gallon equivalent) fuel make them cheaper to operate than internal-combustion cars. Range is now 200 miles and getting longer all the time, he said.

And Roisman has a point, I’ve got to admit. EV technology, to quote the Beatles, “is getting better, a little better, all the time.” Toyota now sells a winter-worthy, all-wheel drive EV. This progress begs the question: if the tech is getting better why not just wait a few years until EVs don’t need rebates to compete? Cellphones don’t need subsidies to “compete” with landlines.

Still, it’s not every day average Vermonters get to ask the chief justice of Vermont’s energy court pointed questions in public about the state’s climate change policy. It’s even more rare for his revealing answers to be broadcast statewide and then preserved in a podcast. Seizing this opportunity, caller “Doug from Underhill” and I posed back-to-back questions. (No, we didn’t coordinate. We were both just trying to “be our own media.” When you do that, good things happen.)

Doug from Underhill questioned whether federal money – derived either from taxpayers or debt – should be spent on a $7500 rebate to make EVs market-affordable. Roisman said in effect that ‘we can’t afford not to spend the money’: “The question is, are we getting value for that money? What happened in this state when we had [Hurricane] Irene? What happens to our electric grid? What happens when we have the flooding with these big storms? The cost of not dealing with the climate change issue is far greater than stopping this problem before it gets to where we have no ability to control it anymore.”

I was the next caller and I asked the obvious follow-up: “then why aren’t we spending our limited amount of time and money on adaptation instead?” 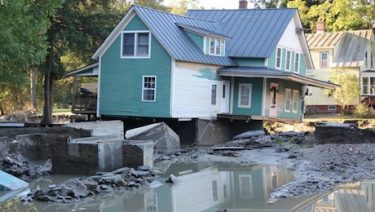 Hurricane Irene came through Bethel, Vermont, on August 28, 2011, and left a trail of damage to houses and other structures.

Roisman answered: “Number one, if we only assume that unless Vermont can change the world all by itself that we shouldn’t do anything, then we have failed to recognized the value of setting an example. Vermont often leads by example rather than follows. Right now the US is not a leader.”

Message: This is all about setting an example to the rest of the world. To be fair, Roisman did add:

We shouldn’t be ignoring taking protective measures to deal with the effects of climate change while we are trying to get rid of the worst effects that will happen if we don’t deal with climate change. We have to do both. That’s why I refer to this as being on a wartime footing.  This needs that kind of mentality.”

It’s sort of like World War II when the U.S. prioritized the war in Europe over the war in the Pacific. Except that on this “war footing,” actual war planning (or lack of it) is leaving civilians defenseless against the invader. There’s not a word about infrastructure adaptation in the PUC report, “Promoting the ownership and use of electric vehicles in the State of Vermont.” Instead it puts EV ownership in the fast lane via subsidies, more charging stations, and ratepayer restructuring. It’s all about carbon reduction.

The same could be said about S.173, “The Vermont Global Warming Solutions Act” introduced this year by Sen. Allison Clarkson (D-Windham) and 12 other senators. It’s likely to get legislative attention in the second year of the 2019-20 biennium. Its statement of purpose declares that “It is in the interest of the people, in order to protect the public health, preserve the environment, and promote the general welfare, that the State reduce economy-wide carbon emissions [italics mine] in order to address the problem of climate change.”

S173 would empower state government to makes far-reaching decisions in virtually every arena of life, in order to reduce emissions. It would not explicitly lift a finger to actually protect infrastructure or people from the threat of climate-related disaster.

In fact, only one major piece of environmental legislation now under consideration may address infrastructure protection against extreme weather: the proposed revision of Act 250. This huge rewrite of the state’s environmental planning and development law is at least a year away from passage. No-one knows how the final version will read.

The executive branch of government has done little better. According to the prestigious Georgetown Climate Center, “Vermont has not adopted an official statewide adaptation plan.” Instead there is a 2013 “Adaptation Framework” for forest, fishery and wildlife resources, and a 2014 vulnerability report called the Vermont Climate Assessment. Follow-up and action may be quietly taking place – but if so, it’s not well known in the State House of the Vermont media.

Amid the windstorm of concerted judicial, executive and legislative branch activity to reduce emissions, there’s barely a whisper about helping Vermonters cope with the next Hurricane Irene. A our leaders go to war as a shining Joan of Arc-like example to the nations, many Vermonters just want to survive the next Irene.