A Burlington city councilor suggested at a recent city council meeting that Burlington police not carry guns while on routine patrol and in the performance of other routine duties.

Police officers would be allowed to use firearms where an active shooter is involved, Progressive Perri Freeman said. No action has been taken on her suggestion, but Freeman has been appointed to a city commission on police policies that she helped establish. A member of the Burlington police officers’ union told WPTZ that police officers can’t be sent into situations where a perpetrator may be armed.

The August 15 WPTZ report is so far the only local coverage on Freeman’s statement to appear on a Google search or review of local media websites.  On Aug. 16 Freeman discussed the interview and coverage on her City Council Facebook Page:

In Burlington, we have had numerous incidences over the last years that have called into question our police department’s use of force and firearm use.

It wasn’t until a few years ago that I learned that some countries do not require their police on regular duty to carry firearms: including the UK, New Zealand, and Iceland. Of these countries, Iceland stood out. Unlike the UK and New Zealand, Iceland has a high rate of gun ownership– on par with Vermont. Yet their law enforcement officers do not carry firearms and have shot and killed one person in 72 years. In Burlington, two people were shot and killed by police in the last six years.

Iceland utilizes a policing philosophy based on a culture of consent, respect and trust. In the US, firearms as a regular policing tool can enable a policing philosophy built on violence and forced compliance. These kind of cultural shifts often don’t happen overnight– I am thankful for the opportunity to be part of these conversations and work toward solutions.”

Her explanation inspired some candid responses from Facebook readers, including Kyle Albee: “How about riding around with the BPD and actually learning what they deal with on a daily, weekly and monthly basis – rather than judging them from your couch.” 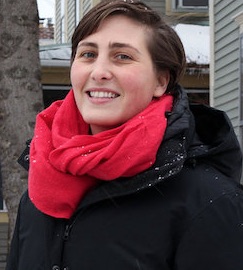 Freeman was elected to the City Council this March after moving to Vermont in 2017. The community organizer represents the “Center City,” an area that includes the Old North End. After being sworn in on April 1, she began drafting a police violence resolution, which passed the City Council on June 3, she said on her Facebook page. Since then, she has been instrumental in establishing a Special Committee on Policing Policies. She and fellow councilor Joan Shannon were appointed July 15 to represent the city council on that commission.

The City Council in June rejected a proposal by Freeman and two other Progressive councilors to “cap the size of the police force at current levels and work toward reducing the number of officers over time,” WPTZ reported June 4.“The money saved would be used to hire more social workers and other social service providers.”

Also, Freeman and one other Progressive voted (unsuccessfully) against the reappointment of Police Chief Brandon Del Pozo. Del Pozo has been on family and medical leave since early this month. It is not known when or if he will return.

Her Facebook biography reads: “Perri Freeman is a community organizer and home health care provider. Freeman began organizing around community and environmental issues in 2013 while studying History at Antioch College and brought her commitment to justice and movement building to Vermont in early 2017. In Burlington, she is known among political activists for her work leading Rights & Democracy’s successful canvass to elect Rep. Bob Hooper in 2018 to the Vermont State House. She also serves as a Steering Committee member for the Ward 2 & 3 Neighborhood Planning Assembly and volunteers with various local projects and organizations.”