Last week saw a trifecta of announcements for statewide office on the Republican side of the ballot for the 2020 election.

In the general election, five-term State Treasurer Beth Pearce, a Democrat, will face Republican Carolyn Branagan of Georgia, a former lawmaker with a reputation for fiscal know-how who says she will try to accomplish what Pearce has failed to do: fix the chronic deficit in the state pension program. 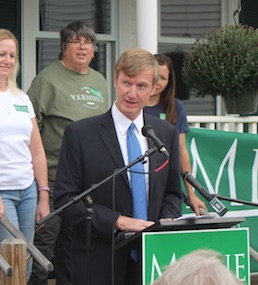 The number of candidates for the Republican nomination for lieutenant governor rose to five with the surprise announcement of Scott Milne of Pomfret. Milne, who narrowly lost to Peter Shumlin in the 2014 gubernatorial race, had the best year financially of any candidate for statewide office, showing a taxable income of more than $2 million on his 2018 tax forms. (All candidates for statewide office are required to submit 2018 tax data. Candidates for the Legislature need only provide less specific information, such as employment and business interests.)

The other challengers in the lieutenant governor race in the August 11 GOP primary are Meg Hansen of Manchester, Dana Colson of Sharon, Dwayne Tucker of Barre Town, and Jim Hoague of Calais.

As expected, incumbent Gov. Phil Scott of Berlin announced he will run for a third term as governor. He’ll face farmer/lawyer John Klar of Brookfield, as well as lesser-known candidates Douglas Cavett of Milton and Bernard Peters of Irasburg.

Four Republicans are seeking the nomination for U.S. Congress, with 2018 nominee Anya Tynio of Charleston having perhaps the best “name recognition” among Vermont Republicans. The other three are Miriam Berry of Essex, Jimmy Rodriguez of Texas (somehow, he’s allowed to run), and Justin Tuthill of Pomfret. Edward Gilbert of Barre announced his candidacy May 5 but died last month of natural causes, according to a source close to the family. The winner will face unopposed incumbent Peter Welch and the winner of a Progressive primary between Cris Ericson of Chester and Chris Brimmer of Ryegate.

The deadline for all candidates for the August 11 primary was Thursday May 28. Click here for a color-coded, user-friendly Google Doc of the Vermont Secretary of State Office’s list of all candidates for statewide office, the Legislature, and High Bailiff (a county position).

Note: some non-statewide office candidates may still be outstanding. Independents were not required to meet the May 28 deadline. Bold-facing names of incumbents (except for High Bailiff) and highlighting candidates by color, have been added by the editor.