Socialism is just a theory, an ethos, for many born and raised in the United States.

But for Ricardo Pita, who was born and raised in socialist Venezuela and came to America about a decade ago, socialism is not just theoretical. He has a message for those who haven’t experienced it and think it will improve their country.

“What we try to tell others, having lived under a socialist regime, is that they sell it as a gamble; it’s a gimmick,” Pita said. “They will tell you this nebulous word of socialism, they promise you the moon, and then it never comes around.”

“It’s not worth the gamble; [socialism] only works for those in charge of implementing it,” Pita said. “There is no more corrosive form to disintegrate the fabric of a nation than socialist policies.” 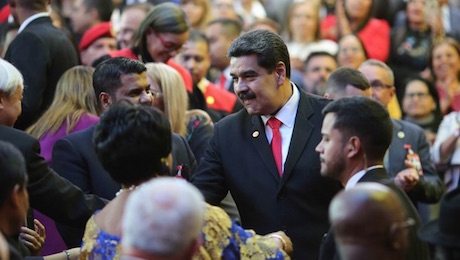 Nicolás Maduro, president of Venezuela, meets with people at his second inauguration.

While socialism’s popularity is rising among younger generations of Americans, few have actually experienced it as a reality of everyday life.

It was all too real for Pita, a student at the University of Miami School of Law and former Heritage Foundation intern, who grew up in Venezuela and witnessed the beginning of the country’s precipitous decline.

Venezuela has had both success and dysfunction in its recent past. As recently as 2012, a contributor to The New York Times praised Venezuela as a positive, alternative model to the U.S. economic system.

This was the modern-sounding “21st-century socialism” of Nicolas Maduro and his predecessor as president, Hugo Chavez, that enthralled many on the left just a decade ago.

Now the country has descended into tyranny and almost unimaginable misery, though with a glimmer of hope that Juan Guaido, who is recognized by the U.S. and a broad coalition of countries as the rightful leader of Venezuela, can restore some semblance of stability and the rule of law to the stricken country.

In 2017, Pita wrote a piece for The Daily Signal about how socialist policies deeply harmed and greatly exacerbated problems for his country of birth.

In a recent interview with The Daily Signal, he fleshed out what it was like to grow up in Venezuela and how he came to live in the United States.

He also offered a warning to those who think that socialism is the cure for any of the ills in modern America, or any other country for that matter.

Pita was born and raised in Caracas, Venezuela, the nation’s largest city and capital. In 2007, at age 14, he moved to Miami with his father Jose, mother Olga, and brother Alejandro.

His parents had worked for family-owned businesses in Venezuela, and the family was able to establish residency in the U.S. because of his father’s H-1B visa. They now are all naturalized citizens.

Venezuela quickly slid into what it is now, Pita said: one of the worst (if not the worst) man-made humanitarian disasters in the world.

“It is breathtaking the pace at which [Venezuela] has deteriorated since I left,” Pita said.

What is remarkable, he said, is how institutions have been “crumbling” one piece at a time rather than through one big blow.

“The amount of damage that Venezuela has sustained as a direct [result] of socialist policies” came through gradual acceptance of socialist doctrines, Pita said.

Venezuela’s deterioration can be measured by raw numbers, too.

Incredibly, according to Axios: “Venezuela’s GDP contracted by 40% in per capita terms from 2013 to 2017—and that’s based off estimates, as Maduro stopped reporting economic data in 2015. A recent filing with the [U.S. Securities and Exchange Commission] by the Venezuelan government indicated that its economy had contracted by 16.5% in 2016 alone.”

Though Venezuela has the largest oil reserves in the world, its oil industry—nationalized in the 1970s—is in a state of collapse.

“Oil is the backbone of the Venezuelan economy, bringing in nearly 98% of its export revenues,” wrote The Heritage Foundation’s Latin America expert, Ana Quintana, in January.

“But those revenues have tanked because of corruption and mismanagement within the state-run industry. In 2012, Venezuela earned $106.7 billion from oil; last year, that number slumped to $20.9 billion.”

And in just the last few years, hyperinflation has overtaken Venezuela’s economy. Inflation topped 1 million percent at the end of 2018, making the nation’s currency virtually worthless.

Basic consumer goods, such as baby formula, have skyrocketed in price or have become almost unobtainable for the average Venezuelan.

Pita said that he still has family living in Venezuela, many with young children, and this makes the country’s grave condition even clearer.

“You get an especially dark picture of the situation by listening to what they have to go through to make sure their kids are well, or properly fed,” Pita said.

To survive, Venezuelan communities both inside and outside the country band together for support, Pita said.

This hadn’t always been the case.

Although Venezuela certainly had many problems in the past, many of which led to the adoption of socialism to begin with, Pita stressed the rapid decline of institutions and prosperity, especially under the current Maduro regime.

“When I left, we began to see the first shortages of food. For example, milk was missing from the market stands, [and] things like beef,” Pita said.

Basic foodstuffs were starting to disappear from shelves, a warning of things to come.

At this time, when they saw the situation was going to keep deteriorating, Pita’s parents decided to depart for the United States.

Pita said that he could “never repay this country,” but that it was heartbreaking to leave Venezuela at the time.

Initially, Pita said, he struggled to adapt to his new country and was “terrified” to leave his home to come to the U.S. When he left as a teenager, he said, he didn’t make the connection between the “mismanagement at the top level” of his country and how it would affect his life.

But he said he caught glimpses of why his family needed to escape when there was a huge upsurge in kidnappings throughout the country.

“I remember having to be the spotter in my car. I would sit next to my mom, and my job would be to look through the side mirror of the car to make sure we weren’t being followed,” Pita said.

Pita said he had to travel in bulletproof cars at times.

It’s the memory of such terrible things that Pita said makes him grateful for the most basic aspects of living in America.

That he can lower his car windows now is something that Pita said he doesn’t take for granted.

He said that although he was initially bitter and afraid to leave his home, the U.S.and his community in Miami—where he grew up—have been nothing but welcoming.

“I credit the way that this country took a family willing to work and be part of it and bring something positive to it, [who were] looking for an opportunity for a new life,” Pita said.

America is his home now, but Pita said he couldn’t go back to Venezuela to visit if he wanted to because things are so bad and dangerous there, especially for visiting Americans.

Venezuelans who have escaped this system, Pita said, have an understanding now of the “resentment” that feeds socialism.

Nevertheless, Pita said, he is more hopeful for his country of origin than he ever has been since socialism “arrived in Venezuela and poisoned it.”

He said Venezuelans have a rising commitment to freedom and he hopes it will have a domino effect so that the region rids itself of authoritarian regimes.

Pita also expressed gratitude to the United States and American leaders such as President Donald Trump and Sen. Marco Rubio, R.-Fla., for their support of freedom in Venezuela.

“For us, there is magic in the air and we are hopeful,” Pita said.

5 thoughts on “This man grew up in Venezuela. Here’s his message to Americans who want socialism.”