“There is a heightened state of alert and concern that we have not seen since 911,” Schirling said in the Zoom call with about 180 lawmakers from the House and Senate.

The occasion for the call is the unprecedented claim by the FBI early in the week that extremists have been planning armed protests for all 50 statehouses ahead of the Jan. 20 inauguration. Despite the nationwide alarm raised by the claim, police in Vermont say they have no knowledge of an armed protest planned for Montpelier. 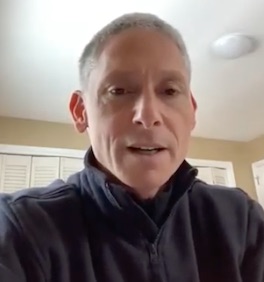 Michael Schirling, commissioner of the Department of Public Safety

At multiple points in the safety briefing, Schirling assured lawmakers Vermont is not the target of any specific threats.

“There are no known legitimate or viable threats to any target or person in Vermont that are known right now,” he said.

Schirling also affirmed that the 51 Vermonters who took a bus from Burlington to Washington, D.C., for the “March to Save America” on Jan. 6 were not involved in the riots at the U.S. Capitol Building, but were peaceful citizens.

“I should note that there’s no indication that folks that were on that bus to D.C. pose any kind of risk, or participated in any way — based on what we know today — in the incursion and insurrection into the Capitol,” he said.

One of the bus riders, Steve Bellows, told True North Reports he witnessed suspicious individuals near the Capitol wearing armor and riot gear who did not look like Trump supporters. He also heard people within the crowds yelling they had spotted Antifa infiltrators. In fact, members of Northeast Antifa told The Commons weekly newspaper in Brattleboro this week that some Antifa were present at the U.S. Capitol on Jan. 6, but only to “gather information.”

On Thursday, the U.S. Department of Justice charged left-wing activist John Earle Sullivan, aka Jayden X, with “violent entry and disorderly conduct on Capitol grounds” and “interfering with law enforcement engaged in the lawful performance of their official duties.” The complaint alleges that Sullivan, who is from Utah, wore a ballistics vest and gas mask, entered the Capitol Building through a broken window, and even filmed the killing of 14-year Air Force veteran Ashli Babbitt by a Capitol Police officer. Sullivan, the founder of Insurgence USA, a riot group created in response to George Floyd’s death last year, has also admitted on video to posing as a Trump supporter. Video footage Sullivan took of the siege has gone viral on the internet.

Schirling nonetheless emphasized that right-wing extremist groups are the groups that pose a threat. The year 2020 was characterized by left-wing anarchy groups burning, looting and occupying major cities including Seattle, Minneapolis, Portland, Ore., Oakland, Calif., and Kenosha, Wis., among others.

“We have previously done briefings for legislators over the course of the last six months or so relative to increasing concerns about, in particular, right wing extremism,” Schirling said. “So you’ve heard from us about things like the Proud Boys, Oath Keepers, the Boogaloo movement, QAnon, the Three Percenters, among others. Those loose affiliations or organizations — depending on how you want to characterize them — are central to many of the threat streams that are circulating in the United States.”

While Schirling did not give any example of a specific threat from the national scene, he assured lawmakers they “do exist in every state in the Union.” He also called on Vermonters to contact authorities if they see anything suspicious.

Since Jan. 6, when hundreds of thousands of Trump supporters protested peacefully in Washington, D.C., many politicians and media have attempted to label all Trump supporters as violent extremists.

Schirling described how Parler, a social media website that markets itself as a beacon for free speech, was taken down by larger internet companies for allegedly harboring extremist plots. Now many social media users are trending towards using Gab.

“In addition to the platform shift, the tone and focus of the threats has shifted as well,” he said, “for not only including folks claiming to want to target government assets, courthouses, statehouses, things like that in each of our states, but also turning their ire towards law enforcement, toward the media in an even more intense way.”