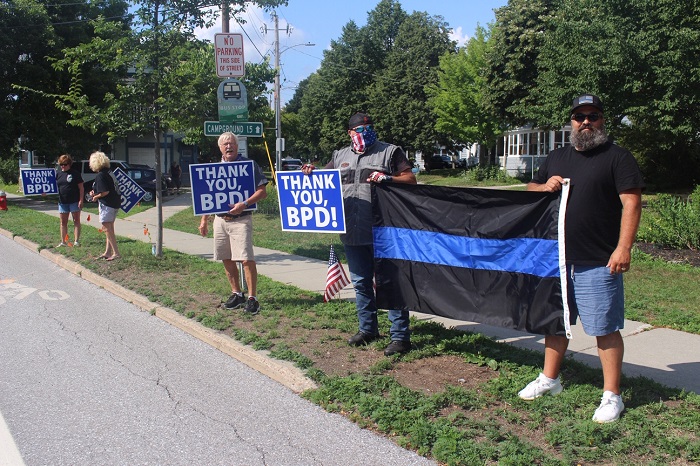 SUPPORTING THE MEN IN BLUE: About 20 people came out Tuesday to show support for local police in front of the Burlington Police Department.

BURLINGTON — About 20 people gathered Tuesday in front of the Burlington Police Department to hold signs and share cheers with passing motorists to boost the morale of local officers besieged by anti-police trends across the country.

The idea to show up at the station began weeks ago when Burlington resident and former city councilor Paul Decelles said he was sick of negative attitudes about police, including the recent decision by the City Council to defund the department by 30 percent.

He decided to order a pro-police flag and, originally, stood outside the department by himself.

“I was frustrated, so I bought the flag and I stood out here over on that corner for two hours by myself,” he told True North on Tuesday.

Decelles said when he got home later that evening, there were people on social media talking about what he had done. Shortly after, he came back out with about 10 other supporters. However, that drew counter-protesters.

“They belittled us. They called us white supremacists. They asked us if we left our hoods at home,” he said. “We’re simply a bunch of Burlington folks and Chittenden County folks who appreciate what Burlington officers do for us every day. This is not a political statement — you see no Trump signs or things like that. We are just here to support law enforcement.”

At Tuesday’s event, at least one counter-protester, James Dye of Burlington, showed up with a Black Lives Matter sign. Unlike the previous counter-protest, the interactions between rallyers were civil.

“The great thing about being in America is we all have the ability to voice our opinions, and I agree with some of what they are saying,” Dye said. ” … I think we should be supporting the police department, but I think we should be condemning when they are not providing safety to all of our citizens.” 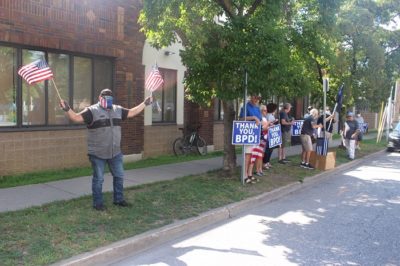 Rallygoers line both sides of the street to show support for Burlington police.

Dye said that despite their differences, he was able to converse with police supporters in a friendly manner.

“What the other side and Black Lives Matter should understand is that police are important and they have an incredibly important job, and that we ought to be thanking them,” he said.

“Police aren’t perfect, just like teachers aren’t perfect, doctors aren’t perfect. And when there is a bad police officer, they should be weeded out. But for any movement to suggest that we should slash police departments or paint all police in the same brush is a huge mistake.”

Tammy Daly was another local resident to come out in support of local police. She said the reception from passing motorists was encouraging.

“There’s definitely been more honks and waves than negative,” she said. ” … We all matter, and we need these police to protect us.”

Other supporters expressed their views that police need encouragement, not jeers.

Kevin King, another local resident, said continued threats and intimidation toward the police will lead to difficulties in finding people to do the job.

“If we continue on the road that we are going we’re not going to have any police,” he said. “They are all going to transfer out of Burlington because of all the problems that come along with living in our community.”

Vermont House candidate Alice Flanders, of Hartford, is an African American and former military officer running to represent the Windsor-4-2 District. She told True North she supports local police across the state.

“I think that it’s important that the people here in Vermont know that it’s OK to say this isn’t right,” she said. “I’m going to be bold to tell you that all lives matter. Our officers in blue, they very much matter. When they put themselves out on the line, they don’t even know if they are going to be coming home again.”