Not sure if you saw my last email but thing are getting worse. Democrats are getting angry! They are so furious with people who use fossil fuels that one Democrat running for Congress swore that she would “tax the hell out of” fossil fuels. Why are Democrats using such aggressive language with Vermonters who are just trying to get to work and heat their homes? 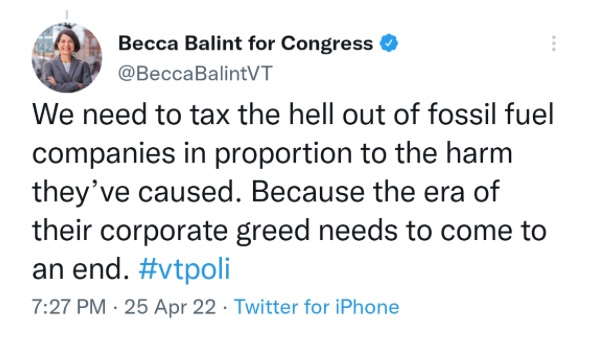 @BeccaBalintVT: “We need to tax the hell out of fossil fuel companies.”

Can you imagine the trouble our country would be in if we send another tax-happy Democrat to Congress who is trying to make it her job to increase taxes on the energy our economy needs to keep moving? She is proving that she will do it by working with her colleagues to implement a new “Mystery Tax” that would increase the cost of home heating fuels without even knowing how much it will cost!

We’ve launched a new page on our website to give you some of the details about this new tax, including a newly leaked video that shows what some Dem Senators are REALLY saying behind closed doors about this tax that some of them can’t even understand or explain.

You can find our petition, a few news stories, and the ads for every Democrat who supported giving away their taxing authority to an unelected board. This would place unilateral control of a certain taxing authority in the hands of a group of bureaucrats who are not accountable to the people of Vermont the same way that our legislators are.

We have a chance right now to STOP this bill from becoming law. It’s a lot easier to STOP a bad bill BEFORE it goes in to law, than to REPEAL one later.

10 thoughts on “Paul Dame: This Democrat will ‘tax the hell out of’ fossil fuels”