This commentary is by state Sen. Russ Ingalls, R-Essex/Orleans.

It’s not often that I interject myself in someone else’s fight. I certainly can say that it is the first time ever that I have jumped into one defending someone from a political party opposite of mine, but there is a first for everything and I believe this time it’s warranted. 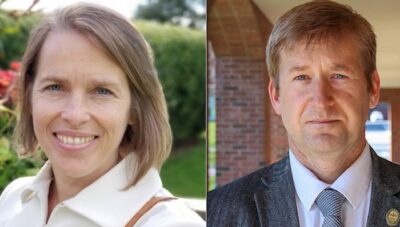 I read an article last week where comments were made by Meaghan Emery, the vice chair of the South Burlington City Council, unfairly criticizing her fellow board member and state senator, Thomas Chittenden, over his efforts to do whatever was needed to be done to ensure that the exciting new company, BETA, would continue to seek an application to build their new manufacturing plant in South Burlington, bringing 500 jobs that fit the state’s goal to combat climate change to his district and city and state.

My first thought was how disappointing it was to see such unfair comments made by someone who was never in the process and obviously didn’t see the hard work and evolving landscape that was going on between the state, BETA and the city of South Burlington.

RELATED: City councilors blast each other over Beta

It wasn’t like BETA didn’t have other suitors. There is a large underutilized airfield just across the lake that is still trying to find their footing after loosing the military many years ago. Plattsburg has worked hard through the years to reinvent itself and to bring a company like BETA on board, with all those jobs, where they already are known to that area and would be a great addition to the city of Plattsburg.

Imagine my surprise when I read again today another angry commentary written by Ms. Emery not only bashing Senator Chittenden again, but then trying to take credit for all what she didn’t do.

I really was taken aback that a council vice chair of a major city in Vermont would use such harsh words and criticisms to describe something that she really wasn’t part of, and then, would shamelessly take credit for all the hard work that others had done.

I watched Thomas Chittenden through all of this process. He and I serve on the Senate Transportation Committee together. There was a lot of wrangling going on trying to make all of this process work. There were big names at the table who all needed their interest met, as they have people that they are responsible for as well. Tom handled it all like a seasoned pro. Yes, there were a lot of things said, a lot of ideas exchanged, and everything was changed multiple times — and then changed more. But that’s what happens with deal making.

I want to close with this: My admiration for Thomas Chittenden has always been at a high level. I found him on the first day we meet to be a highly principled, trustworthy individual. Watching him maneuver all these changing parts and pieces the last few weeks and then bringing this deal to an agreement with help from others has shown me that Tom is ready for prime time. I think that if Ms. Emery would spend more time trying to be part of the process versus part of the problem, then the city of South Burlington would be so much better served.

As for now, the state and South Burlington are in great hands under the capable leadership of Thomas Chittenden.