Morrisville, Vermont — Nichole Loati of Morristown has announced her intention to run for state representative in the Lamoille-Washington district. “One morning I woke up and said ‘it’s time to put up or shut up,’ so here I am,” she says. 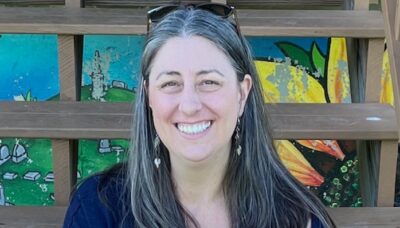 Nichole is a resident of Morristown and small business owner. Her Vermonter husband, Kurt Loati, comes from the well known Morrisville Lumber Loatis. He was raised working in the multi-generational family business until shortly before it closed in 2016. It was at that time that Kurt agreed to join Nichole at Great Big Graphics sign company, also in Morrisville. Nichole actively runs both Great Big Graphics and a small property management company while simultaneously running her and Kurt’s blended household of 8.

Nichole says that her large family has suffered through the ups and downs of the pandemic economy right along with her community neighbors. “My business had to close for a few months, just like a lot of them. Thankfully most of the ones around here did reopen after a short hiatus, but then came the labor shortages, the supply chain delays, the increasing costs of materials. It’s been a real rollercoaster making it through all of this as a small business owner. It’s so sad to see how many of our local businesses who thought they’d made it through the worst ended up faltering through the post-Covid aftermath and closing due to lack of staffing or skyrocketing material costs.”

Nichole says “I believe many of these issues could have been avoided or at the very least minimized. Governor Scott has made many tough decisions and has faced unprecedented challenges. I would never say he’s failed at the job because I don’t know if I or any other could have handled things better at a time when little information was available and pressure from the federal government felt insurmountable. It’s a new season though – and I don’t just mean summer. Our approach needs to remain flexible and resilient as the world shifts around us. I’m looking forward to working alongside Governor Scott and our other elected officials to fix what’s been broken.”

She sees her role of state representative to largely involve listening. “Something I’ve always been is a good listener. I’m a terrible singer, FYI … but a great listener.” she jokes. “That’s what this job is, right? I’m to listen to the folks in my community, hear what’s bothering them, and ask questions about what will improve their quality of life, then take that information into the legislature and make sure everyone in the room has a chance to hear my community’s voice. Vermont isn’t just Chittenden County – it isn’t just Montpelier. That’s something I feel our state legislature forgets sometimes. Sure there are parallels, but Lamoille-Washington has our own unique set of issues that aren’t necessarily known or relevant in other districts. Does that mean we shouldn’t be heard?”

“What particularly concerns me,” she says “is how the stress of the last few years has really done a number on our community solidarity. ALL of our citizens matter. All of our voices should be heard. I’m running as a Vermont republican, but it means a lot to me, and should to the voters too, that I don’t consider myself partisan. I want to work with my neighbors to improve quality of life and strength of community for all of us. That’s going to mean tough love in the State House. It’s going to mean difficult budgetary considerations and strategic planning. I don’t think it’s too late though. I have hope.”

Nichole and her husband Kurt have been happily married for 7+ years. Their combined household of 8 includes Nichole’s three teenage children from a previous marriage, and Kurt’s three teen/pre-teen children from a previous marriage. As if the chaos of such a large family weren’t enough, the Loati’s also have three feline family members, all adoptees from the local shelter as well as a pet snake.

Donations to Nichole’s campaign are humbly requested. Anyone wanting to help improve the quality of life for their Lamoille-Washington neighbors, should make a check out to “Nichole Loati VT Rep” and mail it to the following address: 496 Churchill Rd, Morristown VT 05661.