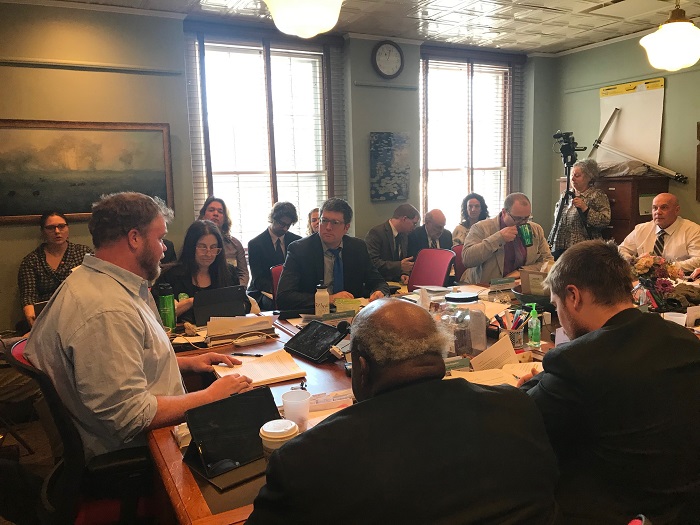 FIRST AT BAT: Gun Owners of Vermont’s new president, Eric Davis, got his first chance to speak before a committee on Thursday. He told House Judiciary members that the “Charleston loophole” is not an issue that leads to gun crimes.

MONTPELIER — New Gun Owners of Vermont president Eric Davis gave his first testimony Thursday at the Statehouse, and in it he told members of the House Judiciary Committee that forcing Vermonters to wait for lengthy background checks punishes law-abiding citizens.

The language of H.610, an act relating to firearms and domestic violence, states that the bill seeks to “eliminate the ‘default proceed’ process created in Federal firearms background check law by prohibiting the transfer of a firearm unless the National Instant Criminal Background Check System has affirmatively determined that the transferee is not prohibited from possessing firearms.”

The “default proceed” means if a background check isn’t completed in three business days for a firearms purchase, the buyer gets to take the gun home at least until the check is completed. Davis said these checks are usually completed instantly, but in some cases they can take months, or never get done.

The bill cites the “Charleston loophole,” a reference to when Dylann Roof, the mass murderer convicted in the 2015 Charleston, S.C., church shooting, was allowed to purchase the .45-caliber handgun he used to kill nine black churchgoers after the FBI didn’t complete a background check within three business days.

Davis told the committee that to make Vermonters wait for each background check because of the unique Dylann Roof case would be to place an irrational burden on their constitutional rights.

“The term ‘Charleston loophole,’ which identifies this obscure corner of the law, is a misnomer created by gun control advocates for what might be best described as a microscopic pinhole in an otherwise broad and heavy canvas of the law, and it is disingenuous at best,” Davis said.

The mass shooting in Charleston is the only case on record in which this alleged loophole resulted in a subsequent shooting. Davis further noted that had the background check been completed within the three days, Roof’s record at that point would still have allowed him to get the gun.

“After many hours of searching for a statistic on how many crimes are committed annually with firearms that slip through this alleged loophole, we found clear documentation of exactly one, the Charleston shooting itself for which this is named,” he said.

“Now this is not to suggest that no crimes have otherwise been committed with obtained through the default proceed, but we recognize that the problem is so very minuscule that there is no observable data if in fact the problem even exists.”

“You are asking the court to make a decision based on a lack of evidence as opposed to saying to an individual, ‘this is your case, you decide what you want, and if there is evidence of firearms being involved in the incident or a history of owning firearms or whatever the concern was, express it,'” he said.

Grearson also explained how inquiring about guns to an already agitated defendant could put the plaintiff at further risk.

“This forces me to ask questions that the plaintiff may not want me to ask,” he said.

Grearson emphasized the problems with having courts enforce gun confiscation without proper due process. He made similar comments to the same committee about two weeks ago.

Grearson added that while he cannot speak for the police, he suspects they could have concerns as well, because when a warrant is issued, the burden of defending that warrant largely falls on the police and their ability to cite evidence that justifies the warrant.