MONTPELIER — In testimony given to lawmakers Thursday at the Statehouse, representatives of the Vermont Fish & Wildlife Department said the 30-megawatt, 15-turbine Deerfield Wind Farm on Green Mountain National Forest land has affected the habitat of black bears in that region.

That message, offered to House Committee on Natural Resources, Fish and Wildlife, was a portion of hearings regarding a rewrite of Act 250, Vermont’s land use law that was designed to keep the state rural and environmentally friendly, but too often prevents developers from getting projects completed.

Catherine Gjessing, general counsel for the Department of Fish & Wildlife, told the committee that 36 acres of prime bear habitat were sacrificed to allow the industrial wind project to come to fruition. 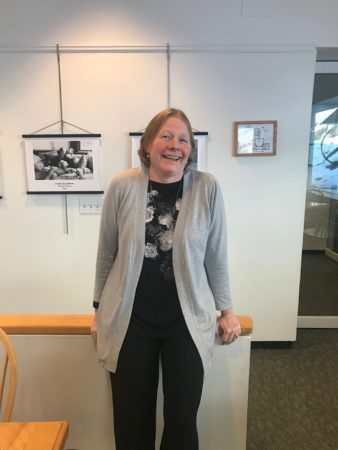 SAVE THE BEARS: Catherine Gjessing, general counsel for the Department of Fish & Wildlife, told the House Committee on Natural Resources, Fish and Wildlife how 36 acres of bear habitat was lost due to the development of an industrial wind project.

The Deerfield project has a long history. Its initial planning phases began over 15 years ago, and it didn’t become an operational power plant until December 2017. The delay was because opponents of the project challenged its development all the way to federal court.

Gjessing said her department was also against the project during its state-approval process with the Public Service Board.

“We opposed the project on the basis that it would significantly imperil or destroy wildlife habitat and bear habitat,” she said. “The Public Utility Commission did not, frankly, rule in the way that the department would have preferred. They issued a decision in which they approved the certificate of public good for the project. They found, based on our testimony, that there were 36 acres of bear scarred beech [trees] that would be removed as part of the project.”

Gjessing added that the commission required that the developer, Avangrid Renewables, secure alternative bear habitat to make up for the loss.

“They basically said you have to go out and find and conserve 144 acres of bear scarred beech,” she said.

She explained that her department ultimately decided to take charge of this task to ensure that the bears got proper land and resources. She said they’ve closed on two projects within the general area of the turbines, one in Straton and another in Jamaica. In all, over 800 acres were secured.

Gjessing said the impacts of the lost acreage are still being assessed: “It’s true that 35 acres will always be gone, at least as long as that wind project is in existence, but we think that we did make lemons out of lemonade, if you will, and tried to conserve some really good parcels.”

She added that her department has about $600,000 remaining in funds allocated to purchase additional bear-friendly territories, and they are still working on that.

While for this project it was established that the developer must mitigate for the lost bear habitat, in many cases the developer will argue against compensating for wildlife impacts.

John Austin, director of the Vermont Department of Fish & Wildlife, reiterated that leaders at the department believe the project never should have happened.

“This is a unique case in many respects, and we cannot overstate the fact that it was the agency’s position initially that the project shouldn’t have been permitted because the character and condition of the habitat was so regionally unique that no impact should be allowed,” he said.

Department of Fish & Wildlife Commissioner Louis Porter said without mitigation agreed upon during development, Act 250 is the default safety net to protect wildlife.

“I think in the absence of mitigation, the Act 250 folks would be in a position of deciding, ‘do we deny this project outright that is already made every effort they can make to avoid or minimizing impact, or do we let it go with no additional compensation or offsets.'”

A 2015 study by Jaclyn Comeau of the Vermont Fish & Wildlife Department details exactly what bear scarred beech means to the health of the local bear population.

“Black bears exhibit fidelity to beech mast production areas, feeding in them year after year when mast is abundant,” the abstract states. “Clusters of mast bearing beech which are remote from human developments are particularly important feeding areas, so maintaining connectivity to such areas is a vital element of maintaining habitat for a viable black bear population. Clusters of beech exhibiting significant levels of bear feeding activity are afforded legal protections under Act 250 and Act 248 in Vermont.”