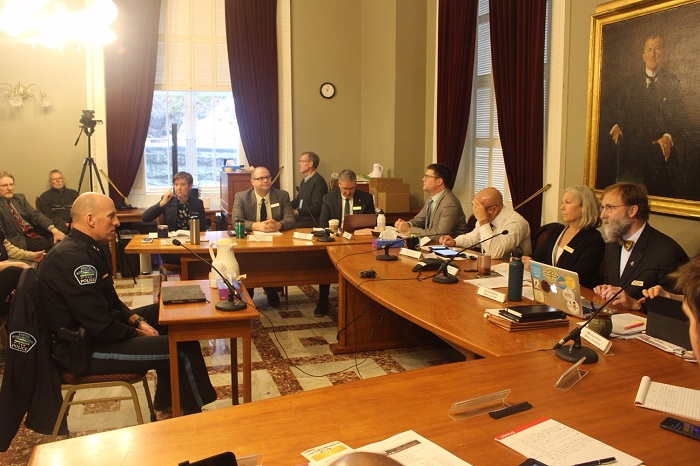 BOOTS ON THE GROUND: Shawn Burke, chief of police for the South Burlington Police Department, explained what’s at stake in doing gun confiscations for relief from abuse orders.

MONTPELIER — As lawmakers consider legislation that would prevent people involved in serious domestic disputes from having a gun, one prominent law enforcement figure and a judge told the House Judiciary Committee on Wednesday that enforcement of the bill would present substantial challenges and risks.

Specifically, H.610 states that if a relief from abuse order is issued against a person, that person must not have a gun. If an alleged abuser owns one, the police must be informed of its location for confiscation purposes. Also, the individual cannot enter any home where guns are present.

Key testimony came from Shawn Burke, chief of police for the South Burlington Police Department. He told lawmakers that any time police are asked to enter a resident’s home — especially to confiscate property from someone who is upset — that’s a highly dangerous situation.

“Anytime we are endeavoring to apply for a search warrant to go into someone’s home, the courts have told us that is the most [sanctified] place for people,” he said. ” … I do feel that it would be a big ask of our rural communities with … one officer to try to not only serve a bench order to maybe vacate or not, and then search and seize firearms.”

He said both the legal implications and physical dangers are substantial enough that even though the court has issued the warrant, police still need to gain their own understanding of the situation before going in.

“I think we need to be part of the investigation so that we know exactly what the evidence at this point is telling us — what we have learned through our objective investigation,” he said.

He also reminded committee members that officers are already stretched thin, especially in some rural areas.

“We’re all starving to find qualified folks,” he said.

Also providing a law enforcement perspective was Brian Grearson, the chief administrative judge of the Vermont Superior Courts. He said having lawmakers instruct on how to handle complicated domestic disputes might not be useful.

“There is nothing average about any relief from abuse order,” he said.

He said courts already have the power to inquire about guns in these situations, and that certain criteria must be met for any confiscation to go forward. First, the plaintiff needs to indicate that a firearm might be present, and that this poses a danger. There should be similar documentation in the affidavit which indicates that a gun should be taken away.

Grearson said H.610, as written, basically takes decision making away from the court.

“I would be very concerned if the legislature starts telling judges what they have to ask,” he said.

Rep. Thomas Burditt, R-Rutland and vice-chair of the committee, suggested the real problem with some domestic disputes is  that relief from abuse orders need to be enforced better.

At the start of the hearing, the committee heard from the family members of victims of gun violence. One of those was Courtney Gaboriault, of Barre, who was killed by her ex-boyfriend in July 2018. He broke into her apartment and shot her multiple times.

Cassondra Johns, the treasurer of Courtney’s Allies, recounted the tragedy.

“She took precautions because she knew her ex-partner was dangerous,” Johns said. “She had spoken to people in his life about her concerns about his behavior and stated that she was scared because she knew that he had possession of firearms. Her pleas for help were ignored because the people close to him did not really believe he could be a threat when in fact he was.”

In addition to restricting gun access during domestic disputes, H.610 also would force gun purchasers to wait until their FBI background checks are complete, which can take months in some cases. It also allows for health care workers and family members to report someone as being unfit to own a gun.