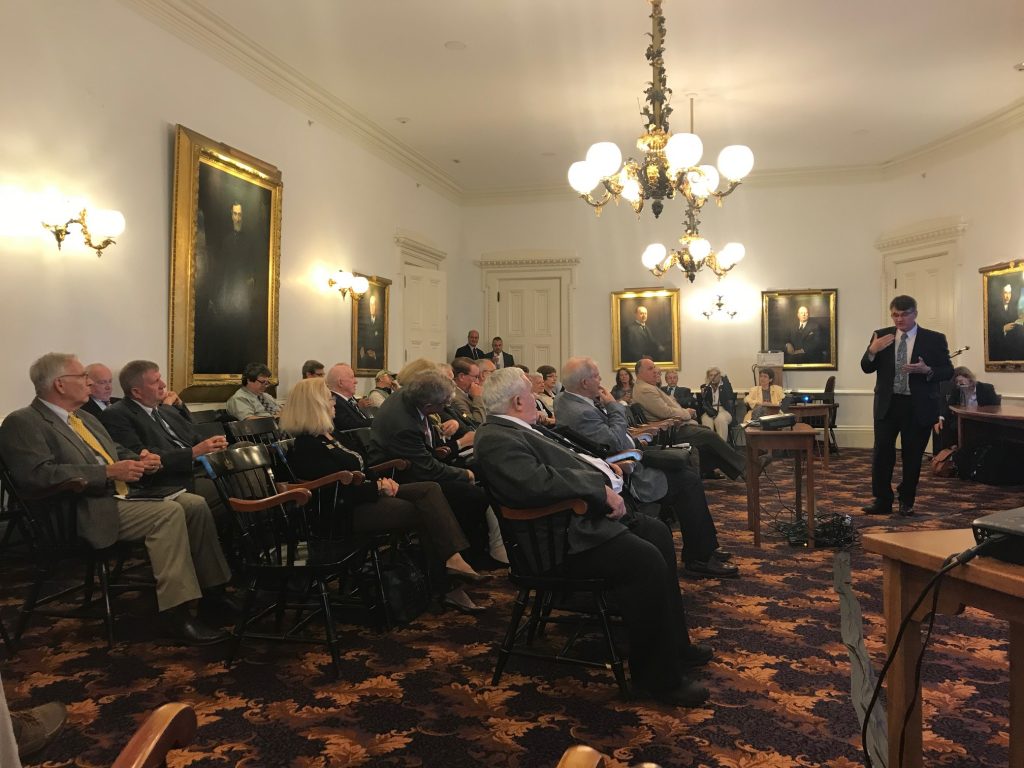 MONTPELIER, Vt. — The special session regarding an anticipated budget veto by Gov. Phil Scott began Wednesday at the Statehouse, and Democrats, Republicans and the administration put competing proposals forward in what could be a lengthy negotiations battle.

At the early morning meeting of the Republican caucus, House Minority Leader Don Turner, R-Milton, affirmed his support Scott’s position of rejecting any new taxes or fees proposed by lawmakers. He encouraged all caucus members, especially those who previously voted for the budget, to vote this time to sustain a governor’s veto.

“We do not want to raise taxes,” Turner said. “I think we’re behind the governor on that. So I want to make sure that we’re clear that when I stand up before reporters, that I don’t have to in the back of my mind worry about people changing their minds.”

At a press conference later in the afternoon, Turner and Rep. Scott Beck, R-St. Johnsbury, presented an alternative plan from that of the administration. The plan would not raise taxes, same as the governor’s plan, but its approach would differ.

“Our plan is let’s use that unexpected revenue for one year and then repay that with the tax capacity opened up by the Act 46 incentives. And for next year let’s give clear direction to the school districts on what has to happen as far as spending, so that when we come back they are hitting our targets for FY 2020,” Turner said.

Turner said there is $14 million that won’t be collected from property owners in districts that have merged. He said that number will go down, and over the following few years there will be new tax capacity.

“We want to use that tax capacity to repay the $34 million,” he said.

Turner explained that his hope is to put together a mix of the governor’s ideas and ones that have passed the Legislature, so as to gain support from lawmakers.

“The plan is really going to do two things,” he said. “First, it’s going to use part of a large pool of unanticipated revenue to hold property tax rates at the levels they are today. … The second thing we are going to do is use that investment from the general fund to catalyze a long-term plan for the education fund that will allow stable property tax rates for up to five years and generate significant long-term savings.”

According to the administration’s plan, these long-term savings can be obtained by transitioning to a statewide health care plan for school employees, reforming special education spending models, reducing the excess spending penalty threshold for school budgets, increasing the student-to-staff ratio, property tax adjustments and more.

Greshen added  it’s difficult for him to imagine contemplating a tax increase when Vermont has brought in $160 million in additional revenue this year.

For Ashe and Johnson, a sticking point is the proposed use of one-time funds to pay down the tax rate for this year. The administration maintains that this money would be paid back over a five-year period, a view broadly dismissed by Democrats and Progressives.

“We have already used some one-time funds to help fill reserves that were raided last year,” Johnson said. “I think that is fiscally incredibly irresponsible and it sets us up for another showdown next year.”

“Using all this one-time money to protect them from that means that you are losing a cost-containment measure, which is people feeling the consequences of the level of increased spending.”

5 thoughts on “Lines drawn in budget standoff at Statehouse”