We have now heard that Sen. Bernie Sanders will run again for a third term as Vermont’s U.S. senator. It is still unclear if he will be a presidential candidate in 2020. If I were his financial advisor I would urge him to not do either.

In the past four years, throughout America, Bernie has done remarkably well in attracting audiences to hear his message. But as a U.S. senator, he is not allowed to charge a fee for his speeches. And this is a major loss of income for him, when by all accounts he ranks a No. 4 or possibly No. 5 on the Speakers Bureau Index. 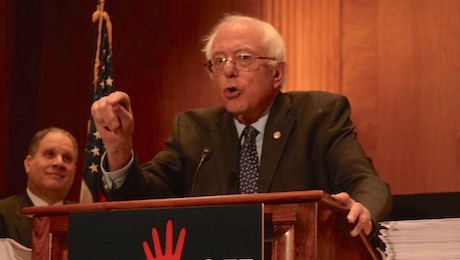 Sen. Sanders could earn big money by leaving the U.S. Senate and going on a speaking tour.

From a financial standpoint, this makes a great deal of sense for the senator. He has worked for over 40 years to erase poverty, drug addiction, economic inequality, and racial prejudice in Vermont, but to no avail. According to the Vermont Food Bank, almost one in six children in Vermont suffer from food insecurity. Deaths from opioids in 2017 were the highest ever, and the state continues to have a serious issue with racism, according to some civil rights groups.

Not only should Bernie give serious consideration to not running again for the U.S. Senate, but he should also not waste his time being a presidential candidate for the Democratic Party. In his last run, he was out-distanced by Hillary Clinton in securing the African-American vote by a margin of 4-to-1. The senator has recently completed a number of national speaking events with the Rev. Al Sharpton with a goal to change the margin. What a waste of time and effort.

Those of us who personally witnessed Sharpton’s performance in 1988, in Wappingers Falls, New York, in the Tawana Brawley case, would urge Bernie to keep a big distance. The folks the senator is trying to win over know full-well that he left Brooklyn and went to the second whitest state in the country. And only during the 2016 presidential campaign did he give any thought to the audiences he is now trying to win over.

Also, the last thing you need if you were involved in campaigning, whether for the U.S. Senate or the party’s presidential nomination, is any negative findings that might come from the FBI’s investigation of Burlington College. The bureau’s investigation must be coming to fruition; it has gone on long enough.

And Bernie, don’t ignore the Washington, D.C., press. They will be tenacious in their quest to get answers as to the status and ownership of Old Towne Media LLC. The press was as puzzled as anyone else as to why a small house at 4507 Penwood Drive, in Alexandria, Virginia, was the place where the channeling of close to $85 million in campaign funds passed through. (Well, not entirely. The 15 percent commission stayed with the LLC and, to this day, no one knows who actually owns the company.)

Sen. Sanders, you may not have won your party’s nomination in the last election (the Clinton gang stole it out from under you), but you did discover something unique: There are many Americans and organizations who would like nothing better than to have you come and speak. So why not take them up on it and at the same time be building a comfortable retirement base? The compensation from one speech alone is equal to a half-year’s income as a U.S. senator.

And let’s be quite frank, you will be continuously out of Vermont these next six years. Don’t let this chance of a lifetime, going on the speaker’s tour be passed up.

9 thoughts on “Keelan: Bernie should enroll with the National Speakers Bureau”