The following is reprinted from the John Klar for Senate campaign email.

I am pleased to announce that I am seeking your vote in 2022 as Orange County senator.

Vermont is struggling economically, even as the state uses that very suffering as justification to pass ever-exploding budgets. Vermont’s state budget has increased from a whopping $6 billion to a proposed $8.3 billion in just three years. Instead of using a crisis to go on a spending spree, COVID funds should have been applied to reduce the state’s embarrassingly underfunded pensions system, which will only become more difficult to fund as time progresses, threatening insolvency unless massive funds are extracted from taxpayers. 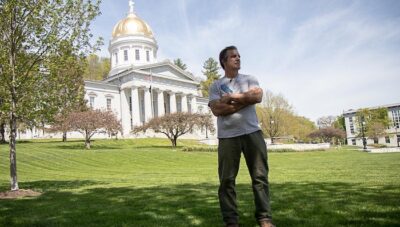 We do not have the luxury of playing ideological fiddles while our Rome burns. I have written extensively about the threats of inflation to future prosperity, and about the vulnerabilities of the nation’s food supply to even more pronounced inflationary pressures. Vermonters must remember the Great Depression, and their dependency then and now on small farms. Tourist attractions and downhill skiing did not feed Vermonters in 1929, and won’t now. We must quickly make farming more profitable and support our small farms – and not just dairy! This is an economic opportunity for export to urban states to our south, and will also benefit the ecosystem by sourcing more regenerative agriculture close to home.

Our schools have become a disgrace. Teachers and administrations have dishonestly pretended social justice ideology is “not being taught,” a bold lie which itself exposes the truth – progressives must hide their dealings. Our children are being indoctrinated politically on every issue from guns, abortion, drug use, sexual activity, race, climate change, and anything else the extreme leftist majority abuses government to impose. This is unconstitutional, and also understandably falling apart. The answer is twofold: support parents who seek alternatives, as it is unconscionable to compel anyone to endure such indoctrination; and restore the constitution – government has no business morally conditioning others’ children, either to the Left or the Right! I will work tirelessly for both causes.

I ask for your support in this election, not just for me but for all competent conservative candidates. The problems in Montpelier will worsen unless sensible voices join the conversation – please help our conservative candidates restore fiscal and regulatory integrity! Our government is imploding, and we must reclaim the balance that has been lost.

Please donate to my campaign. I will steward your money well, and ensure our voices achieve maximum impact. I am frugal, and my role is to lift all conservative boats and ideas, not just my own – I will lead other Vermonters to become elected by my side. Once elected, I will prove my worth in service.

Vermonters wish to have more than one political voice in their Legislature. I will be the bullhorn for that other voice, and I ask you to make me your next Orange County Senator so that I may do so with even greater fervor!