Montpelier, Vt. – Governor Phil Scott on Wednesday announced Commissioner Mike Pieciak will be stepping away from his role leading the Vermont Department of Financial Regulation (DFR) next month to pursue other opportunities.

Commissioner Pieciak was appointed to lead the consumer watchdog agency by Governor Scott in January 2017. He joined DFR in 2014 as Deputy Commissioner of the Securities Division, appointed by Governor Peter Shumlin. 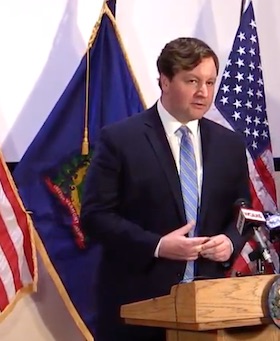 “Mike has been a valuable member of my Cabinet. He’s been a highly effective manager, a strong advocate for consumers and the economic revitalization of our state, and stepped up to serve on my COVID response leadership team,” said Governor Scott. “Throughout his career in state government, he’s been a dedicated servant to the people of Vermont. I wish him all the best in his future endeavors.”

“It has been an honor to work alongside the talented team at DFR and the Governor’s Cabinet over the past eight years,” said Commissioner Pieciak. “I am proud of what we accomplished to ensure the fair treatment of Vermonters in their financial dealings, and, when necessary, right wrongs on behalf of consumers. I am grateful to have had this opportunity to serve Vermont.”

In his eight years of service to the State of Vermont, Commissioner Pieciak advocated for consumers and worked to strengthen the state’s financial services industry. Under his leadership, DFR recouped over $13 million for Vermonters, including a record $1.8 million settlement with a South Carolina insurance company for selling unapproved and inadequate health insurance policies to Vermont college students.

Pieciak also expanded the Department’s supervision of online securities trading and cryptocurrency platforms during his tenure. Earlier this year, a DFR probe of the digital-asset company BlockFi led to a multi-state $100 million settlement.

With the onset of the pandemic, Governor Scott asked Commissioner Pieciak and DFR to lead the State’s COVID-19 modeling and he has appeared regularly at COVID press briefings. DFR also required health insurers to cover the cost of testing and treatment for COVID-19 and directed premium relief of over $25 million back to Vermonters. Additionally, Pieciak led a volunteer team of 20 DFR employees who administered $32 million of COVID hazard pay grants to 20,000 front-line Vermont workers. The program was created and administered in just over 10 weeks during the first year of the pandemic.

In 2019, DFR explicitly prohibited insurers from using age to deny gender-affirming care to Vermont youth. Pieciak also instituted a series of initiatives to address senior financial abuse, including enhanced penalties and establishing a victim restitution fund with increased awards for vulnerable Vermonters who have been targeted by investment scammers.

In addition to his duties at DFR, in 2018 Pieciak was elected president of the North American Securities Administrators Association, the oldest international organization devoted to investor protection, and served a five-year term on the U.S. Securities and Exchange Commission Small Business Capital Formation Advisory Committee in Washington, D.C.