Even before COVID, Vermont’s public school system was in trouble, suffering from declining test scores and student enrollment, which required the closing of some smaller rural schools. During COVID, yet more students have been withdrawn — the number of homeschooled children has reportedly tripled.

Meanwhile, the predominant partisan persuasion of Vermont’s teachers and school bureaucrats has been an ideological obsession with white supremacy based on a faddish “theory” that does not stand up to critical scrutiny. Not only have these public “servants” been paid to betray parents by inflicting rash ideological experiments such as gender fluidity, they have persistently lied about the practice and attack parents who raise concerns. These are not school officials, but selfish predators, and Vermont parents are still awaiting accountability.

In the past year, Vermont superintendents have dismissed concerns about gender pronoun conditioning of young children, denied CRT is being taught in the face of clear evidence that it is, and approved displays of the overtly political ideology of Black Lives Matter at schools. Vermont has “led the nation” in this blatant violation of basic free speech laws, a transgression that finally reached boiling point when Superintendent Layne Millington canceled a Randolph Union High School (RUHS) baseball team fundraiser for the offense of selling Chick-fil-A chicken. The resulting brouhaha has exposed the persistent ideological conditioning of RUHS students, and the celebration of far-left political ideology while conservatives and their families are demonized. (Please see the attached examples of school materials from the RUHS curriculum: images 1 and 2).

Following the U.S. Supreme Court’s recent decision of Shurtleff v Boston, which ruled 9-0 that public displays could not favor one flag over another, RUHS and others in Vermont were forced to revisit their obviously unconstitutional actions, with many in the social justice warrior camp still reluctant to obey clear law. 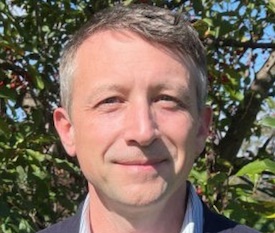 Superintendent Millington essentially turned on the parent community and claimed their resistance to the BLM flag reflected not their awareness of First Amendment law but their racism — and that has not gone over very well with the community.

Though RUHS has resumed respect for the law and removed the illegal BLM flag, social justice agitators such as former RUHS principal Elijah Hawkes continue to agitate for more attacks against children’s rights.

Given the Shurtleff decision and the clear law surrounding first amendment liberties, it is now clear that Elijah Hawkes violated students’ rights when he and others displayed the BLM flag — Layne Millington has stated that they knew it was unconstitutional and did it anyway.

Now that the flag has been removed and the law restored, Mr. Hawkes remains obliviously unaccountable for his flagrant transgressions. As reported in Seven Days:

Hawkes, who is now director of school leadership programs at the Upper Valley Educators Institute, contrasted the thoughtful process of raising the flag with the hasty one of taking it down.

“If … members of the community feel like it’s important that the flag come down, there’s an opportunity there for school and district leadership to engage in the same kind of extensive dialogue and learning that we did when the flag [went] up,” Hawkes said. “That seems to have been … missing in the latest decision, which some might see as a prudent decision made in light of a recent Supreme Court ruling. But I have to wonder, was it prudence or was it panic?”

The so-called “thoughtful process” ignored the First Amendment, and was ignorantly hasty — there was no “extensive dialogue and learning” — just the opposite; there was the unilateral application of an experimental ideology. BLM slogans and political messaging still adorn the halls of RUHS, allowing teachers the virtue-signaling liberty to speak that is denied the students. Yes, it is time to have that full conversation that has been stifled by Mr. Hawkes & Co. Compliance with federal law post-Shurtleff could not have been hasty enough.

Vermonters must wonder about Elijah Hawkes, who claims all white Vermonters are supremacists and that schools must reprogram their children to eradicate this evil. Is he capable of comprehending the basic free speech liberties that even his students understand? Or, is it that his cultish fervor with his own version of racist eugenics means that he believes that free speech rights of white students should be taken away? This is, after all, the dogmatic belief of the critical race theory practices that are being inflicted on Vermont school children while parents are lied to that it is not.

Mr. Hawkes’ statement suggests he and the state of Vermont are not willing to obey the U.S Supreme Court in their “service” to parents and children, and that perhaps yet another lawsuit will be necessary for their basic instruction. But if parents must sue the government to secure basic rights for their children even after a clear ruling like Shurteff, then it is evident that those in charge cannot be trusted, and someone must go — if not the miscreants who have abused public trust, then the students who must flee schools to enjoy the most basic of human rights: freedom of expression.

Vermont’s student body will continue to shrink, while the bureaucracy that serves the remnant will continue to expand — Vermont will apparently lose half of its students and schools before it eliminates a single overpaid superintendent position. No matter how much malfeasance they commit, the bureaucrats gaslight and subordinate parents, children and the Constitution.

No wonder student test scores are slipping and children are being withdrawn from these harmful environments — these people are not very smart if they think parents aren’t paying attention.