At the Police Commission’s meeting Tuesday evening in Burlington, acting Police Chief Jon Murad focused on the city’s latest reshuffling of staff to address rising crime in the city while dealing with officer shortages.

Among other topics discussed, Murad said some calls that would have normally seen an in-person officer response may have to settle for online interactions — and the person responding may not be an officer.

“We have revised the priority response plan and we have not changed any category of incidents with regard to Priority 1, 2, or 3, but we have turned several types of incidents into CSO [community service officer] response, and other incidents into an online response,” he said. 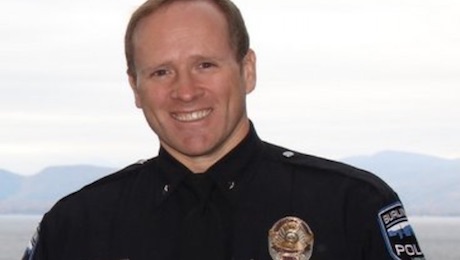 MONTHLY UPDATE: Acting Burlington Police Chief Jon Murad says that the department has to make strategic use of its limited resources in order to protect residents.

Murad noted that a lot of crime incidents are engagements from officers being proactive out in the city. However, the department’s Priority 1 incidents are on the rise.

In past years, the Burlington Police Department has operated with around 100 officers. Today the department is making due with just 63 officers, 53 of which are really available. Murad said officers are getting stretched thin because of the understaffing.

“There are six airport officers, that’s down from seven because we currently are running lean on our midnight,” he said. “… The volume of narcotics complaints necessitates that we have a road officer assigned to narcotics separate from the narcotics detectives.”

After all special assignments are accounted for, just 21 officers are available for patrols.

Murad also told the Commission that he was pleased with the latest actions by the City Council to support the mayor’s latest city budget proposal.

“The rebuilding plan is an ambitious plan, but it is an achievable plan over the next three years for us to get back to the numbers that were ultimately adopted by City Council in a partial reversal of its decision of June of 2020 to move towards a number that this commission supported of 87,” he said.

In other police-related news, a new website called KeepVermontSafe.com has been launched by Bradford Broyles and Alex Shapovalov to help support police and expose the negative consequences of the “defund the police” movement.

“Defending those who protect & serve our communities is paramount to public safety throughout Vermont,” the website states. “This last year has been especially difficult, our law enforcement professionals have endured attacks from our politicians and organized protest groups.”

Broyles told True North in an interview Thursday that the purpose of the organization is to engage residents across Vermont and hold discussions about the vital importance of strong law enforcement.

“This is an organization that is purposed to support our law enforcement community statewide, and know that there are people out there that appreciate the police. And so a lot of the stories that are posted are supportive,” Broyles said. “We’re going to also be creating events around Keep Vermont Safe where we are going to have community discussions about the role of policing, and the positive effects of what our law enforcement people do day in and day out.”

The website encourages Vermonters to join other pro-police organizations such as the Vermont Police Coalition.

75 years of the Vermont State Police

The Vermont State Police is celebrating its 75th anniversary this year.

“Our organization and our people stand on the shoulders of those who served before us and built the Vermont State Police into the premier organization it is today,” the director of the State Police, Col. Matthew T. Birmingham, wrote in a letter. “During the past 75 years, VSP has expanded and evolved into one of the country’s most professional, progressive, and well-respected police agencies.”