MIDDLEBURY — Six Republican candidates for a combination of statewide and national offices gathered at Valley Bible Church in Middlebury on Saturday evening to discuss the future of Vermont.

Anya Tynio, a resident of West Charleston, is running for the U.S. House seat to succeed incumbent Rep. Peter Welch, D-Vt, who is running for U.S. Senate. 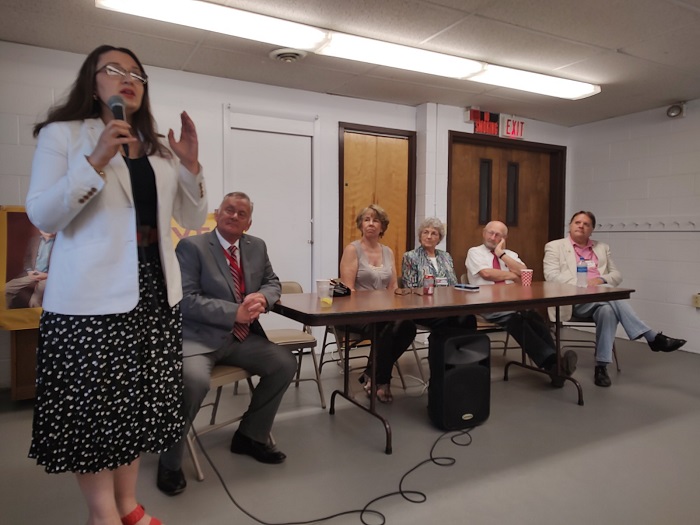 Candidate for U.S. House Anya Tynio speaks at a candidate forum. To her right are other Republican candidates Gerald Malloy of Perkinsville, Valerie Mullin of Monkton, Lynn Dike of Bristol, Jon Christiano of New Haven, and Gregory Thayer of Rutland.

Tynio also commented on federal red flag gun laws, which were part of a larger gun control bill that was passed in Washington D.C. following the Uvalde, Texas, mass shooting.

“Red flag laws are unconstitutional, they do not allow due process for the person that they are targeting,” she said.

On Proposal 5, which would amend the Vermont Constitution to allow for unrestricted abortion through all nine months of pregnancy, Tynio said Vermonters need to “fight that with everything we have because, when I was talking about repealing laws, it’s very different if it’s actually in the Constitution.”

West Point graduate Gerald Malloy, of Perkinsville, is running for U.S. Senate. He served the United States for 22 years on active duty, and following that has worked business management and executive positions since 2011.

“In terms of my platform, take a look at my website. I’m right in line with the Republican Party,” he said. “I think the three things that I’m most interested in is getting back to abiding by the U.S. Constitution, getting back to promoting economic prosperity and growth, and getting back to ensuring defense and security.”

Malloy said his experience in the military is a great asset, and he already has more than a decade’s experience working in Washington, D.C., with various Emergency Management response positions.

“I have 42 years of service to our country — military service, government service, even business service where I supported U.S. government agencies, mostly the Department of Defense, and mostly in the Washington, D.C., area, he said.

Also at the event was Gregory Thayer of Rutland, who is facing off against state Sen. Joe Benning for the primary for the open lieutenant governor’s seat.

“I’m a constitutional conservative Republican — I love Jesus Christ and I’m really proud of every one of these candidates for stepping up and running to support and represent you,” he said. “… I support private property rights, I support your choice and your fight to make your choice in whatever you want to do. The government needs to leave us alone and get out of the way.”

Speaking about Vermont’s affordability crisis, Thayer said “great people are leaving our state because it’s so expensive to live here, to be here. When I ran for mayor in [1999] in Rutland I said that we export too many of our children, and we’re still doing it.”

Three candidates at the forum are running for state representative seats.

Valerie Mullin, of Monkton, and Lynn Dike, of Bristol, are running for the Addison-4 House district, which has two seats to fill. Mullin spoke about the lack of affordability in the state for working-class residents.

“I have three sons who have exported from this state,” Mullin said. “This week I learned about a firefighter and a veterinarian tech who are leaving the state because there’s no room for them, because there’s no apartment for them to rent. So they are just going to move.”

Dike spoke about taking political fights to Democrat and Progressive opponents rather than being on defense.

Jon Christiano, who is running to represent the Addison-5 House district, is up against fellow Republican Zachary Kent, of Bridport, in the upcoming primary. Both seek to replace outgoing state Rep. Harvey Smith. Christiano emphasized the need for representatives who champion traditional values and constitutional government.

“I am a Christian. I ran for the Senate last time and I very prominently started out basing my platform on the Bible, the Constitution … and I believe in strong family values,” Cristiano said. “Our country is desolate without it, a stronger family is the backbone of our country.”