In July 1947, it was customary to find Albert Christie sitting in a Vermont State Police 1947 Ford sedan on Vermont Route 7 in Bennington County. Trooper Christie was the in-charge officer of the Bennington County state police and had been a former officer of the Vermont Highway Patrol, the predecessor police agency. The sedan was much like most of the model Fords of the day, except that it had a red light and siren attached to its front fender and a stripe running down the middle of the car and lettering denoting State Police.

Seventy-five years later, when Christie’s successor Lt. Steven Coote climbs into his state police cruiser, a Ford Explorer, the vehicle reflects how much has changed, at least outwardly.

The cruiser is equipped with Genisis II radar, Kenwood and Motorola radios, a Dell laptop computer, three Watchguard cameras, a flotation vest, and an advanced Safari Land tactical vest. Safely secured are a Sig Sauer P320 side-arm and an M-400 patrol rifle next to a Remmington bean bag shotgun and taser.

There have been other significant changes, obvious and not so apparent, since May 1947 when Governor Ernest W. Gibson asked retired U.S. Marine Corps Major General Merritt Edson to bring Act 163 to fruition. The law created the Department of Public Safety and a state police force.

Passing a law and creating an organization that intended to provide police coverage to over 9,600 square miles of state territory, bordering three states and a foreign country, was quite challenging for General Edson and his initial troop force of 55.

It was six months earlier that Vermont’s lack of a centralized and trained police agency drew the wrath of many. A well-publicized event would call attention to the deficiency.

On December 1, 1946, a Bennington College student, Paula Welden, went missing in the Green Mountain National Forest. The New York and Massachusetts state police were called to Vermont to conduct/coordinate the search. She was never found, and to this day, it is still an open case.

Commissioner Edson was no stranger to Vermont or chaos. He was a native of Rutland and Chester and a UVM graduate. Five years earlier, in August 1942, he was in the thick of confusion and uncertainty when he and his First Marine Raider Battalion held an overwhelming Japanese force at bay in the first land battle of the Pacific, Guadalcanal. He would be awarded the Medal of Honor for his leadership, courage, and tenacity. In July 1947, all such traits were needed.

Many in Vermont, especially in the Legislature, believed a state-wide police force was unnecessary. Furthermore, it was a time when attempting to get any state funds was painstaking and next to impossible. The General did get an annual salary of $5,000 and a starting wage for his troopers of $3,000. Today’s comparable amounts are $150,000 and $59,813 (after probation).

For a headquarters site, the Legislature went along with Edson’s idea of repurposing the long-abandoned and dilapidated Redstone Mansion in Montpelier (until recently the Vermont Secretary of State) to be the headquarters of his newly formed agency. Much of the work was done by his troopers and volunteers.

Much of the history, specifically the first 50 years, can be found in former VSP Sergeant Michael J. Carpenter’s 1997 book, “Green Mountain Troopers: Vermont and Its State Police.” The book was an essential source for this author when he wrote for The Vermont Trooper magazine on the 50th and 60th Anniversary of the VSP.

Writing in The Vermont Trooper Magazine, 2007 Summer Issue, Colonel James W. Baker, then Director of the VSP, noted what he believed was “the number one challenge facing the Vermont State Police — ‘role definition.’”

Commissioner Edson defined the original role: “It is our responsibility to give the people of this state freedom from crime, freedom from police oppression, and freedom from traffic accidents.” When you think about this definition, stated 75 years ago, in essence, it still defines the VSP.

What has changed is how the VSP carries out its role as it contends with a much larger state population. Even larger when you add the millions of tourists who come to Vermont each year. Added to this are the ramifications of September 11, 2001, an exponential increase in illegal drugs, domestic abuse, external accountability, and a dramatic increase in the laws now enforced by the VSP. Edson was busy in the summer of 1947, even designing a specific uniform to define his troopers. Little wonder that he copied from the U.S. Marines and the Royal Marines. There has been no change since.

The role of today’s VSP, in part, can be defined by the equipment they carry or have available to them. Edson did not have a water-rescue force nor, for that matter, a forest/mountain rescue unit. Nor did he have a special unit just for hostage negotiations and special purpose raids. Surely, he did not have specially trained, non-police professionals assigned to the various VSP barracks to defuse a domestic disturbance call by bringing their mental health treatment skills to a tense and challenging situation.

Other tools in a VSP trooper’s toolbox are the on-person camera and the cameras positioned in the cruisers. These pieces of equipment go a long way in defining what transpired on a call and are a considerable advancement for empirical evidence.

According to Lt. Brian Miller’s comment in the Spring 2009 issue of The Trooper Magazine, the VSP has gone from the use of fingerprints as a primary investigative tool to DNA.

In the early summer of 1947, Commissioner Edson was given a month and a half to get his force of 55 ready for deployment. Over half of the force was reassigned from the Highway Patrol. In 2022, a recruit with the VSP will be expected to satisfactorily complete sixteen weeks of professional training before being recognized as a Vermont State Trooper. 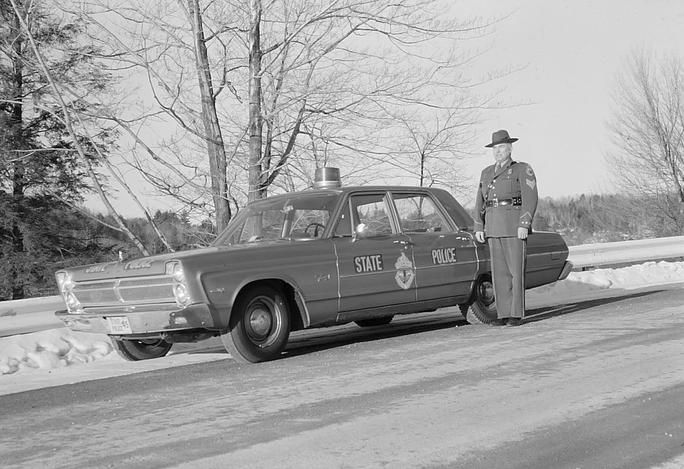 It is by no means an exaggeration to note that no state agency has had more presence in the eyes of the public, residents and visitors, than the VSP. Their presence is at each corner of the state and everywhere in between. Most likely, they are the first state representative a visitor will encounter. This has not changed in 75 years, nor has their professionalism, courtesy, and appearance.

In the future, the VSP role definition will undoubtedly include more involvement within the communities they serve and additional specialized services. Perhaps, even their role patrolling highways will cease if the driving world adopts 100% Level Four autonomous driving. Or will it be Madam Colonel when 30/30, the goal of increasing the participation of women in policing to 30%, by 2030 is reached? We will just have to wait and see.

General Edson’s family of 55 troopers in 1947 is today a family of 333. “Grandpa Edson” would be proud of what he started, and so are all Vermonters who depend each day and night on the service of the Vermont State Police. Happy 75th Anniversary.

One thought on “Keelan: The Vermont State Police — From fingerprints to DNA in 75 years”