As I have chronicled here, Vermont’s Shelburne Farms has been reshaped beyond anything recognizable in its stated or historic mission, and now boasts of its use of policies to screen employees and to restrict access to materials based solely on skin color. Vermonters must be informed of where their donation or purchasing money goes — at Shelburne Farms, it is heinously applied to undermine the Constitution, rewrite Vermont’s history, and brainwash children to be earth-worshiping racists.

This disgusting transition is blatant. So much for educating the public about sustainable agriculture: now “sustainability” translates to what Shelburne Farms calls “antiracism praxis.” Shelburne Farms proclaims:

Shelburne Farms recognizes that justice, equity, and access are central to sustainability. We are committed to translating these values into action across the organization by improving equitable outcomes in our culture, programs, and services.  Shelburne Farms is working to create experiences of belonging for all, including BIPOC, LGBTQ+ communities, people with disabilities, and people of all economic realities.

What Shelburne Farms does not recognize, I believe, is constitutional law, historical fact, or inclusion of conservatives, Christians, or white people. That this institution perceives it can talk out both sides of its race-focused mouth reflects the true face of “social justice” — so infatuated with its moral superiority that it is blind to its abject failure and the endless race war violence it seeds (instead of potatoes). 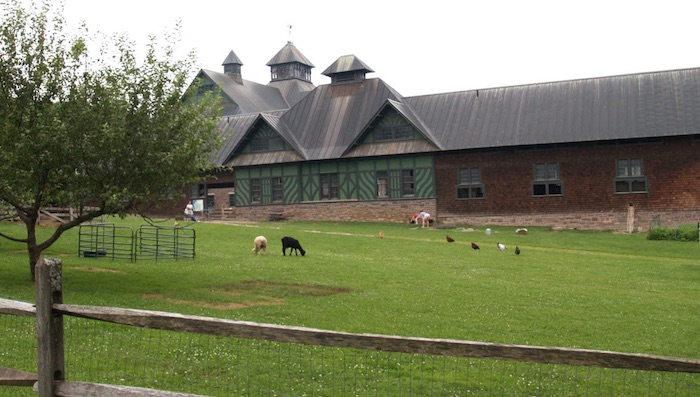 Located on the shores of Lake Champlain, Shelburne Farms was founded in 1886 as a model agricultural estate using money from railroad magnate William Henry Vanderbilt. The 1,400-acre property was designated as a National Historic Landmark District in 2001.

As with all white virtue-signallers, Shelburne Farms first invited an “equity assessment” of the organization, overseen by Shadiin Garcia of Shoreline Consulting, who has also testified in the Vermont House Education Committee in support of similar race-based experimentation on children in Vermont schools. Unproven assumptions of systemic racism are employed to impose a deliberate discrimination against white people to “repair” past transgressions and rectify a flawed “Christian hegemony” (ignoring the Christian Abolitionist movement that ended slavery). BIPOC people are conditioned to embrace their racial “exceptionalism” while condemning white people as subconsciously racist. This bad dream is being nurtured into nightmarish reality by Shelburne Farms.

Shoreline Consulting has the answers to make the world perfect. Offering specific programs for “operationalizing equity” and “racial consciousness building” (the opposite of being colorblind), their “Chalkboard Project” provides “a critical equity lens for partner school districts enhancing their educational equity practices.” Vermonters are told that CRT is not taught in schools; yet it is applied (this is called “praxis”) in schools just as at Shelburne Farms.

Shadiin Garcia is the “expert” on transforming children to create a new world based on skin color:

From systemic injustice to internalized oppression, apathy, and trauma, Shadiin Garcia, Delma Jackson, and guests will pull back the layers of struggle within social progress, and dream together, even as we remind one another that our personal tragedies, triumphs, and healing will inform our ability to create a better world.

Garcia has applied her personal tragedies and triumphs to transform the Oregonian education system:

This role was designed to create the conditions to execute and sustain ODE’s strategic equity and anti-racist vision in coordination across our offices and in partnership with community. Shadiin will work to leverage ODE’s capacity for internal change, innovation, and collaboration while aligning multiple approaches into collective strategies that dismantle old systems that no longer achieve the aims of the agency.

Claiming they are erasing a racist culture and replacing it with a new “enlightened” organizational culture, one sees quickly there is no room at Shelburne Farms for Vermont’s true history or even for an unbiased agriculture. This “culture” is rooted in delusion, fantasy, and self-empowering race-talk. Indeed, it is not a culture at all: it is contra-cultural, and is defined by dismantling and destroying American culture. In my view, the replacement “culture” is better known as anarchy, or nihilism.

We’re told it’s all about the victimized Indians who starved here before we farmed here. Shelburne Farms does not acknowledge the abolitionist past of those who donated land to create it, instead switching loyalties to a fantastical vain imagining of an idyllic Abenaki world. It instructs not how to nurture soil, but to worship dirt:

This 3 part series is designed for farm-based educators interested in deepening relationship to place. The act of creating and speaking an Indigenous land acknowledgement is a practice that is becoming more common in the eastern parts of Turtle Island. While we experience it as a moment at the beginning of a gathering, it is actually part of a bigger process for our society and for the individual. … By acknowledging Indigenous people’s relationship to land, and exploring our own relationship to land, we will enter into a process of truth and reconciliation. Time and space will be created to consider the connections to and implications on our teaching practices.

What are these agricultural teaching practices if not a hippie coven? Shelburne Farms is a farm only insomuch as it sells food from the land it has usurped, to apply the profits to indoctrinate and subjugate white children under the pretense of an agricultural education.

Vermonters are on the verge of a food crisis, and food inflation and local production will become paramount — grains don’t care what color skin plants them any more than what color teeth chew on them. Instead of contributing important agricultural knowledge to solve that challenge for all people equitably, Shelburne Farms has squandered resources on an ideological fallacy, serving up race discussions to divide Vermonters in that great time of need.

In this regard, Vermonters must examine the clear parallels between what Shelburne Farms is religiously preaching and what all the social justice attackers are screeching as they criticize white Vermonters. As Marianne Ward recently explained in a commentary published at VTDigger regarding Burlington, racial initiatives there excluded white people, and access to materials was similarly denied:

When I asked the acting REIB director (the director left March 10) if I could have access to the materials, I was told no — they are not for public viewing. They are legitimate internal city business!  What are they hiding? … Tyeastia Green, reveals the new Black narrative that explains the new racist label … her words can only be described as white-hate tribal indoctrination. Fueling divisiveness will not mend our broken communities. But then, healing is not everyone’s goal.

Shelburne Farms has undertaken not to heal the land but to politicize it. Vermonters should distrust, with disgust, this pernicious abuse of their heritage. Shelburne Farms is self-appointed champion of the New Age — forget about using government to democratically change society: they will impose an instant race-reboot, and all will be grand:

The ongoing work is to build an equitable and inclusive organization, and more broadly, to support an equitable and inclusive society. … Using an “equity lens,” we have begun to take a critical look at our curriculum. As we develop a program, we ask who the program is for, who is benefitting from it, and whose voices are missing, and adjust accordingly. Then we try to examine the program activities with a fresh eye – especially with programs we’ve been running for a long time – to see where we are inviting in multiple perspectives and how we might incorporate (or drop) ideas, activities, resources, stories, or knowledge to make the program more accessible to all. … This is a group of coworkers committed to diving deeper into the “itchy bath” (as a former coworker called it) of dismantling racism and privilege. As people and professionals, we share thoughts, ideas and perspectives, meeting each other where we are at without shaming or placing blame. It’s not enough to just not be racist or misogynistic or xenophobic; I have to actively work against these ideas in order to create the world I do want: one that embraces difference, opportunities, and access for all.

But wait, Shelburne Farms is talking out both sides of its mouth again — the consequence of their “equity assessment” is that they are overtly unequal: I have been denied access to the contents of these teaching materials, as are all white Vermonters. Excluding 94% of the state’s demographic is hardly “making the program more accessible to all” — it is the opposite. Talk about privilege!

Future race-based workshops are planned for Shelburne Farms’ woke praxis — not the dangers of GMOs or glyphosate, but race-training using the service to justice network:

This immersive training is anchored in the transformative power of people in social service and advocacy organizations. Grounded in anti-racism praxis, arts, culture and tradition, these trainings create shared knowledge, a common framework, and embodied experiences that support the collective reimagining and reshaping of non-profits in the DC area.

Just like Shelburne Farms’ current race-centered seminars, this “work” of “reshaping nonprofits” is geared toward uniquely pitting black people against white people in the name of creating a “black sanctuary”:

Service to Justice (S2J) intends to hold a fellowship space for BIPOC who hold leadership roles in movement organizations and/or racial equity efforts. We’re calling this divine gathering Black Sanctuary! It will be a 4-5 session series held weekly beginning in February. Folks will be supported in prioritizing their healing and pleasure practices, as well as growing in relationship with one another. … S2J plans for this space to be low-cost or no cost for BIPOC participants.

Well, white folks must prioritize their healing and pleasure practices also — by growing food maybe? With this kind of agenda promoted by nonprofits like Shelburne Farms, will it be surprising if Americans create “white spaces” and “white sanctuaries” to preserve and defend their culture and race from attack? It’s only equitable — and inevitable, given the agenda embraced by Vermont’s nonprofit “farming education center.”

Certainly, everything about SJW “work” is the Orwellian opposite of its pretense: equity kills equality, discrimination based on race is justified, free speech or dissenting opinions are stifled in the name of “justice.” Systemic racism is presumed and never proven. And anyone who disagrees is targeted, shamed, and disparaged. The virtue-signallers don’t shame each other while in their SJW pews at taxpayer expense — they shame Vermont’s culture and white citizenry. The naked-emperor Shelburne Farms must tell us why it has renounced Martin Luther King, Jr. and his mighty legacy, along with the abolitionist legacy of the Farm it now racially weaponizes in violation of numerous laws.