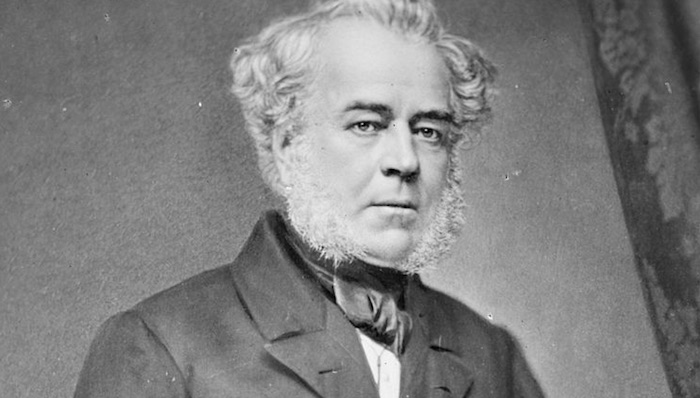 James Watson Webb’s lengthy condemnation did not mince words about the “institution” of slavery. He called slave-supporting interests thugs, asserting the assault against Sumner reflected this barbaric mentality: “prominent and threatening stands the Bullying of the Slaveocracy, boastingly pointing to the bowie knife, the pistol, and the bludgeon.”

I have previously established that 501(c)(3) nonprofit Shelburne Farms has implemented an unconstitutional race-only training, hiring and indoctrination system that condemns white people for their skin color and Vermont for a history of alleged systemic white supremacy. In addition to the oxymoronic “Healing the Roots of Racism in Ourselves” seminar for BIPOC-only registrants, the reshaped (“woke”) Shelburne Farms has re-written its own history.

The Abenaki are the First Peoples of this place. In the 17th century, Europeans arrived and soon after began clearing the land and displacing the Indigenous community through settler colonialism. The Town of Shelburne was chartered in 1763 and by 1840 it was reported that in addition to fruit and grain production, local farmers raised over 17,000 sheep that year.

From 1886 to 1902, William Seward and Lila Vanderbilt Webb consolidated 32 of these farms into a 3,800-acre agricultural estate. … With increasing financial pressures by the 1950s, the family shifted away from maintaining the main house and barns to focus on raising dairy and beef animals.

In 1972, Webb descendants decided to open and share Shelburne Farms with the world and give it a new purpose. In 1984 the family contributed the property to the nonprofit educational organization that owns it today.

The hints at historic conversion begin here: the Abenaki were themselves immigrants “of this place,” killed in large numbers by aggressive Iroquois — is there any evidence that the land of Shelburne Farms was taken “unceded” by whites from nomadic tribes who may once have hunted there? An institution built on educating about agriculture must understand that agriculture requires the clearing of trees for planting crops — something the Abenaki did not do in these forests, and what has been the Vermont “tradition” for centuries.

Shelburne Farms is an education nonprofit on a mission to inspire and cultivate learning for a sustainable future. Our home campus is located on the unceded, traditional, and contemporary homelands of the Winooskik band of the Abenaki.

Shelburne Farms acknowledges that our buildings and landscape reflect a complex legacy of racial and economic privilege. The systems of advantage that supported the creation of the agricultural estate in the 1880s continue to this day. We believe that our work calls us to share a more complete story of this place, and to use our resources in service of justice and equity at Shelburne Farms and beyond.

This nonprofit seeks to use the Webb family’s lands to transform the world in service to Social Justice Theology, and will discriminate against people in hiring and access to money and land resources based solely on skin color to do so. In its current series for BIPOCs only on “Healing the Roots of Racism in Ourselves,” Shelburne Farms displays its novel agricultural mission — the instructor links to materials that reflect what Shelburne Farms now “believes their work calls them to do”:

The mission of gs [generative somatics] is to support social and climate justice movements in achieving their visions of a radically transformed society. We do this by bringing somatic transformation to movement leaders, organizations, and alliances. Our programs engage the body (emotions, sensations, physiology), in order to align our actions with values and vision, and heal from the impacts of trauma and oppression. We envision an interdependent society founded on the creativity and embodied collective power of our movements. The institutions and norms that we sustain will reject structural oppression, exploitation, extraction, and intergenerational violence. Instead, we will affirm life itself and recognize ourselves as part of nature rather than separate from it. We will ensure safety, dignity, and belonging for all.

Well, all except people who disagree with this upside-down-from-Martin-Luther-King world. The radically transformed society envisioned by many social justice warriors sees Vermont and America as a “hegemonic Christian society based on white supremacist ideology” that will be replaced with the “equitable” race-based organizations. These virtue-signalling delusions can be viewed in other approvingly linked resources that pant with anticipation in “this time of resurgent anti-racist movement building” — such as this from the “about” page of a website called White Supremacy Culture:

For example, I (and colleagues) have come to see other central elements of white supremacy culture that need to be named: fear is an essential characteristic, as is the assumption of “qualified” attached to whiteness. Defensiveness needs to be broadened to include denial, which is included in the list in this current iteration. A class lens and issues of intersectionality are important to address.

… Thank goodness our commitment to our own growth and development as anti-racist white people allows us to see the ways in which our internalizations of superiority warp our relationships not just with BIPOC people and communities, but with other white people and with ourselves. This is the magic of racial justice work. Our commitment to racial justice is a healing practice for all aspects of our lives.

Per this ideology, it would appear that defending Vermont’s agrarian history proves one is a racist, and round and round we go. But the deniers are not nebulous white supremacist “systemic” force, but individuals re-writing history before our eyes.

Though the true history of our region’s Abenaki is forever lost, the history of the Webb family who invested their “white privilege” wealth to create and then gift Shelburne Farms to Vermonters (and also some acreage in New York) is well established. William Seward Webb’s father was James Watson Webb, whose legacy to America might be better praised rather than tarnished: the Webbs were zealous abolitionists.

America became bitterly divided over the slave status of Kansas in the 1850s, a cause which Vermont and its governor vocally embraced. On May 22, 1856, pro-slavery Democrat Preston Brooks brutally assaulted and nearly killed abolitionist Republican Senator Charles Sumner in Congress with a cane. In his outrage and fury, Republican New York abolitionist James Watson Webb issued a powerful rebuke to the South in which he claimed the institution of slavery caused the violence because “nineteen twentieths of their population carry arms — bowie knives, pistols, and sword canes!” to use against each other, which was “conclusive as regards the demoralizing tendencies of an institution.”

Webb’s lengthy condemnation did not mince words about the “institution” of slavery. He called slave-supporting interests thugs, asserting the assault against Sumner reflected this barbaric mentality: “prominent and threatening stands the Bullying of the Slaveocracy, boastingly pointing to the bowie knife, the pistol, and the bludgeon.” Webb called upon Northerners to respond with life and limb, reflecting “our unalterable determination … never to yield to Southern fanatics or Northern demagogues, one foot of territory…. to the blighting cause of slavery.”

At great risk of physical assault or assassination, Webb declared:

Are there not among us, can there not be found in the great North, men of qualifications for both the Senate and the House of Representatives, who possess also the necessary moral daring and physical courage to meet and put down this disgusting bullying, either with pistol or with bludgeon, as circumstances may require? If there be such, let them be sent here as your Representatives, until the South are taught, after their own fashion. … The time for submission has passed; and that for action presses forcibly upon us. Our opponents have made, and present to us, the one great issue, of extension of Slavery into Territory now Free. It is our duty to meet it. (Slavery and its tendencies; a letter from General J. Watson Webb to the New York courier and enquirer)

This is the family legacy once associated with Shelburne Farms, along with the Webb family’s development of agricultural knowledge. To read the untruthful Shelburne Farms website today, one would think the Webbs were slaveholders or scalped Indians – where is the truth, and the inclusiveness, and the healing of the land? Those are not the mission of social justice – just the opposite.