BURLINGTON, Vt. — The “Burlington Thought Exchange” political discussion series is coming back for its second iteration, this time to analyze political dialogue about the minimum wage.

Hosted by Vermont Future Now, the one-on-one political discussions are being staged every couple of months to get non-like-minded individuals to discuss hot-button issues in a civil manner.

This event, round two of the series, will take place 7 p.m. Monday, June 18 at the Study Hall space on College Street. It is free to the public, and food and beverages will be provided.

While the “thought exchange” pilot event in April was about the gun rights debate, this time participants are going to tackle the minimum wage.

Vermont lawmakers worked this year to raise the state minimum wage from $10.50 per hour, and both the House and Senate passed a $15 minimum before sending it to the governor’s desk, where it died from a veto. 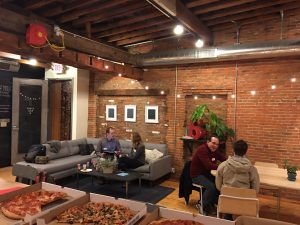 The “thought exchange” in action.

“There’s no end to topics, so this one is going to be on the minimum wage, which of course has been a big debate of late,” said Asher Crispe, executive director of Vermont Future Now.

“We’re looking forward to engaging a new audience and crew, so we will have a lot of different, new people there,” he said.

In a press release announcing the event, Vermont Future Now describes itself as a “non-profit, non-partisan, civic innovation organization” that seeks to bring together people who might not otherwise engage in political dialogue.  “The series aims to bridge the political divide in our country by facilitating local discussions about pressing political issues,” it states.

Crispe says the key to the experiment is having people with differing viewpoints sit down in a face-to-face setting. The personal interaction runs counter to the social media communication context, which often stokes the flames of harsh discourse and hate speech.

“It only really works if you get people who think very differently in the room,” he said. “As with any free market, I think that in a free market of idea exchange, the best ideas kind of naturally climb to the top.”

He noted that in addition to the one-on-one conversations, there will be guest speakers at the start.

During the two-hour event, individuals will pair up with non-like-minded partners and speak on the topic for a set time before rotating to a new partner. Each participant is graded by his or her counterpart on the ability to engage and maintain a respectful, constructive discussion.

At the gun debate discussion in April, Dan Feliciano, of Essex, won the top spot. He said after the event that he “was trying to understand how a person came to their belief … it just created a better conversation.”

Lilian Traviato, who is helping stage the “thought experiments,” said she hopes to see a diverse group of people who differ not only in political viewpoint, but also in age, gender and race.

“I was very aware of the fact that everyone in the room was white, and we’re representing this idea that we want a diverse mix of political positions and backgrounds,” she said. “We do confine ourselves into bubbles that are similar to us.”

She added that in today’s age of social media, where a computer screen is the only moderator between those interacting about politics, there’s a level of anonymity that doesn’t exist in a face-to-face meeting.

“I think people are more likely to [be verbally aggressive] when there are no immediate repercussions, or when the other person isn’t right in front of you,” she said.

Crispe noted that this time around the group has a promotional video to give the public a good idea of what to expect.

“I think that will help people understand what they are coming to,” he said. “We’re taking the approach that this is an ever-evolving project, and that based on collaborative input from our audience and feedback that we get, we’re going to continue to reshape the experience.

Crispe said his group’s “thought experiment” may soon be coming to Bellows Falls and Manchester.