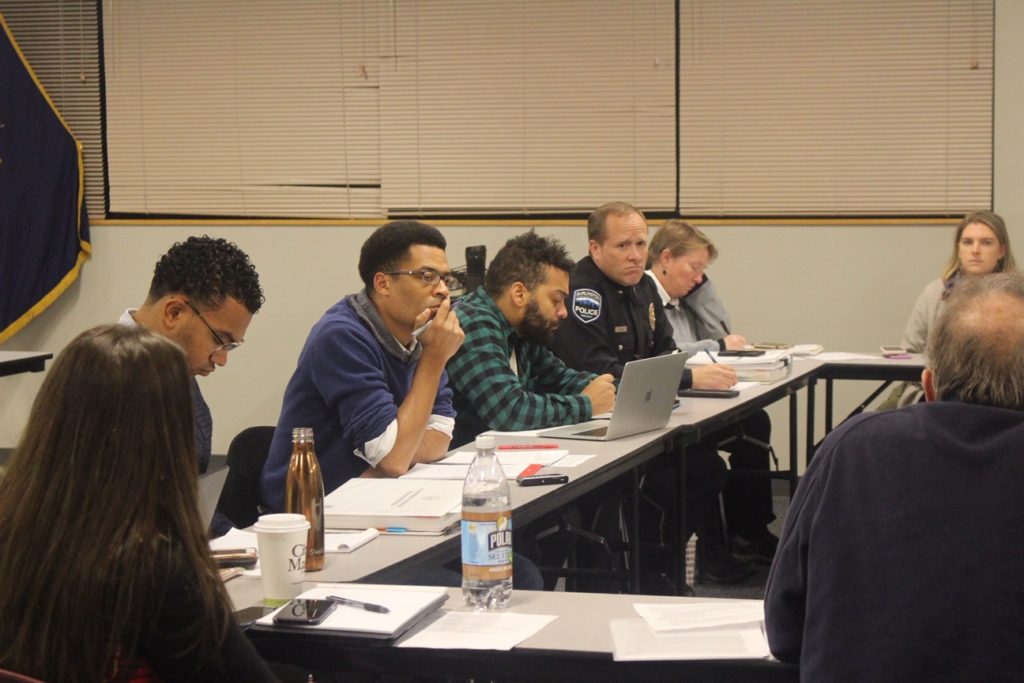 BURLINGTON — A special committee created to review policing policies after a series of use-of-force controversies earlier this year determined Tuesday night to look outside of Vermont for examples on how to make policy changes.

This was the committee’s sixth meeting, and the first after state Attorney General TJ Donovan announced on Friday that de-escalation techniques were lacking in an altercation between police and a civilian at UVM Health Center back in March. Burlington Police officer Cory Campbell was found to have used appropriate force while confronting Douglas Kilburn, 54, who died just days after the physical confrontation.

During the meeting, the 14-member committee decided to look beyond Vermont to get insight on how policing might be changed. In particular, members discussed looking for advice from Camden, New Jersey.

At their next meeting scheduled for Dec. 3, the committee plans to examine Camden’s use-of-force policy. Burlington Police Department Deputy Chief of Operations Jon Murad told True North that he and certain colleagues have already interacted with leadership of that city’s police department.

“The Burlington use-of-force policy that is currently in place is a textbook use of force according to the International Association of the Chiefs of Police from five to 10 years ago,” Murad said. “It is, however, not something that is in keeping with the more cutting edge [policies] that we have seen from places like Camden, from places like the New York City Police Department, and from places like Austin, Texas.”

He said there is nothing necessarily wrong with the current Burlington policy, but newer policies place more emphasis on de-escalation and use force only as a last resort.

“There are things that it does not include, including strong articulations about a philosophy for the sanctity of life and the obligation of officers to protect life,” Murad said. ” … An emphasis on de-escalation, that is in our policy. But it is not emphasized in a way that we would want it to be.”

During the meeting, one discussion focused in on what number of police officers is appropriate for the city of Burlington. The department currently has about 100 officers, but it is approved for up to 105.

Carter Neubieser, a committee member representing the local LGBT community, suggested capping the number down to 100. However, that idea ran into opposition.

“I’m not supportive of reducing the number of police officers,” Burlington City Councilor Joan Shannon, D-South District, said. “In my neighborhood we have problems and we call the police, and at times it is very hard to get the police to come to our neighborhood because we’re not in the more downtown area. And when you call Thursday, Friday, Saturday nights, the police are … they kind of triage our calls.”

“Around the nation, recruitment and retention is an issue for policing profession,” he told True North following the meeting.

He added that the role of police is changing over time so that police now are being called upon to perform non-traditional duties.

“That includes dealing with certain types of disorders that once upon a time were the subject of other kinds of social service, and no longer. [Those] fall to the police,” Murad told True North. “Now we have few officers available and our ability to respond to those increasing tasks is challenged.”

Neubieser suggested that having the city invest more in social services might be the solution.

“There is no sense that this is gonna change over the next year, that you are gonna pick up 10 more officers to fill demand,” he said. “So in the meantime, this is a more sustainable strategy of investing in social services directly instead of continuing to fund more and more officers.”

The committee also made clear its desire to better understand the public’s perceptions of the police. Murad noted the department sent out a survey along with the National Police Foundation. The text-message survey is intended to be concise so that more people will respond with feedback. It is a precursor to a larger survey that will go out by mail.

Kevin Rodgers, a doctor representing the medical community for the committee, worried that this survey might not accurately represent minorities.

“It is just not a sound way of gathering information in the community,” he said. “There’s selection bias, there are problems with the questions, and so on and so forth.”

Murad responded that the survey is done by a reputable non-governmental organization that works with the federal government. The organization specializes in crafting these for law enforcement around the country. The text-message survey was sent to about 17,000 residents known to have had some interaction with police.

Committee members expressed that they would like to see more local residents attend these committee meetings. On Tuesday, no members of the public were in attendance. The committee weighed holding future meetings at City Hall rather than at the police station.

The committee is expected to provide policy recommendations to the city council at the end of this month. However, members are seeking an extension to that deadline.