Last Tuesday, the U.S. Supreme Court cleared the way for a lawsuit against Remington Arms Co. brought by survivors of victims of the 2012 Sandy Hook Elementary School shooting who want the gunmaker held responsible for the deadly attack. The Supreme Court declined to interfere at this point in the proceedings. 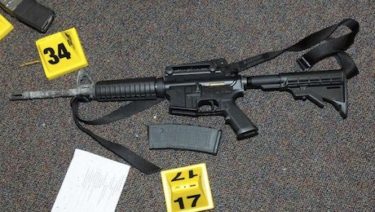 The Bushmaster XM15-E2S used in the Sandy Hook massacre

The plaintiff’s argument is that the murderer chose the firearm “for its military and assaultive qualities, in particular, its efficiency in inflicting mass casualties,” arguing it was “marketed in association with the military.”

The suit actually challenges the blanket immunity against buyer illegal misuse that Congress granted to firearms manufacturers under the Protection of Lawful Commerce in Arms Act of 2005. Remington asked the Supreme Court to halt the lawsuit, citing that protective statute.

Now recall what happened in at Sandy Hook. Two years earlier the shooter’s mother had legally purchased a Remington Bushmaster XM-15 rifle. Her seriously disturbed son went looking for the rifle, found it, murdered his mother with it, and then murdered 20 children and six adults at the school.

The survivor plaintiffs now want Remington to pay them millions in damages.

By the plaintiff’s reasoning, the maker of the car that Steven Bourgoin used to kill five teenagers on Interstate 89 in Williston ought to be held liable for damages.

It’s now up to the Connecticut federal court to decide, and it needs to see this argument as utterly ridiculous.