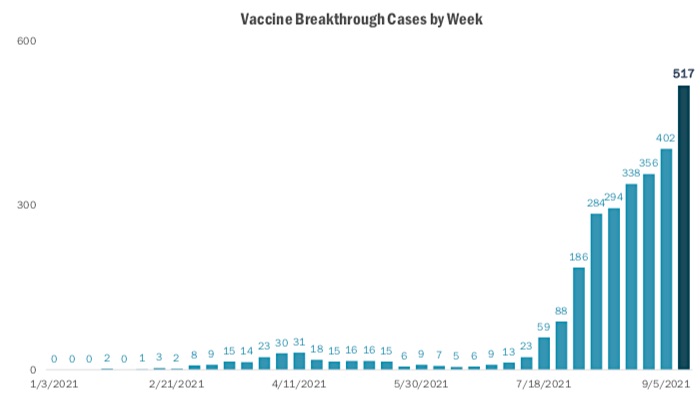 For the month of September about three in four COVID deaths were considered “breakthrough” vaccinated cases, and 517 such cases were recorded in just one week.

Of 33 COVID-associated deaths recorded by the Vermont Health Department through Sept. 28, just eight were unvaccinated. Past examinations of the Vermont death certificate data have shown that most COVID-associated deaths are among the sick and the elderly, and some cases were listed without a positive COVID test. The department reported four additional deaths Wednesday.

This pattern of mostly the elderly passing away from the virus may be continuing with the more recent deaths. “Recent data specific to the Delta wave shows that Covid-19 deaths are mostly among older Vermonters, in many cases regardless of the person’s vaccination status,” VTDigger reported Wednesday.

According to Vermont Department of Health data, as of Sept. 30 exactly 488,200 people in Vermont have taken at least one COVID shot — including “non-Vermont residents.” With the state population estimated at 623,251, that means at least 135,000 Vermonters, or about 78 percent, received a shot. Data also shows that even for higher age groups up to age 79, the risks of dying from COVID-19 are only at 0.13 percent or less.

On the national scene, U.S. Rep. Peter Welch, D-Vt., and U.S. Sen. Bernie Sanders, I-Vt., are at odds on how to vote on a $1.2 trillion infrastructure bill. Sanders is calling on lawmakers to vote against the measure, arguing that endorsing the bill would take away political leverage in negotiations concerning a larger $3.5 trillion ‘infrastructure’ bill that includes many non-infrastructure-related items.

I strongly urge my House colleagues to vote against the bipartisan infrastructure bill until Congress passes a strong reconciliation bill.

Welch meanwhile will support the $1.2 trillion version and he suggested a more diplomatic approach for strategy.

Rep. Peter Welch, D-Vt., who supports passing the infrastructure bill, said he understands his fellow progressives’ desire to secure more firm commitments on reconciliation but… “Leverage tends not to work so well with allies,” he said. “Dialogue and engagement works better. https://t.co/S0JKUThogp

According to GovWin.com, even the smaller $1.2 trillion infrastructure bill includes climate change mitigation.

The $3.5 trillion infrastructure bill has been described as “an assault on our nation, on our communities, and on the American Dream” by former President Donald Trump. Suspicious components of the bill include “amnesty for illegal immigrants, free community college and a repeal of the Trump-era tax cuts, among others,” according to a Washington Times report.

Another example of an unrelated add-on is a plan to have hefty $700,000 fines for companies that don’t mandate vaccines for their employees.

With just 65 officers currently available to protect the citizens of Burlington, the city has recently been seeing a five-fold uptick in shooting crimes, and more crimes have been reported on the department’s press release page since then.

One report indicates that the city’s officers recently “with the assistance of members of the Drug Enforcement Administration Burlington Resident Office, conducted multiple controlled purchases into a Drug Trafficking Organization.” A series of arrests were made last week.

The arrestees were Tyrish Stevenson, 47, Christopher Rivers, 27, and Aldwayne Gadson, 47, all from Brooklyn, New York. Stevenson tried to flee the scene but he did not escape. The search “resulted in the seizure of over 40 grams of suspected cocaine, over 18 grams of suspected fentanyl and two firearms,” according to Burlington police.

In another report, another gun incident occurred near Andy A_Dog Williams Skatepark just after midnight last Friday when a caller said that a person fired a gun from a red vehicle.

“Responding officers located the vehicle and several persons known to them from previous law
enforcement encounters,” the report states. “Officers also recovered physical evidence, including evidence of gunfire, and interviewed witnesses, who indicated that there had been an altercation between two groups.”

The report notes this is an ongoing investigation.