The train currently travels from New York City to Rutland, via Albany, New York, and Castleton.

Service in Middlebury is anticipated sometime in 2022 although Amtrak has yet to commit to a specific date. 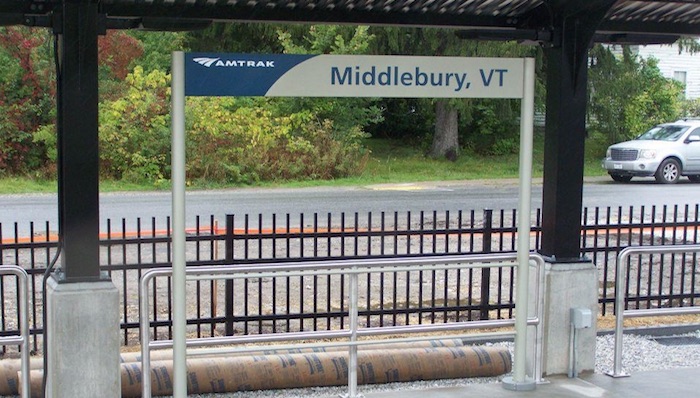 The Ethan Allen Express started service in the 1990s but hasn’t always been popular.

“The train has had mixed success during its short life and Vermont even threatened to shut it down at one point,” according to the train-spotter website American Rails. ” … Historically, this route never had direct service, at least via its own named train. However, one could reach the two cities (New York and Montreal) aboard fairly nice accommodations by riding one of the Delaware & Hudson’s crack trains… Future plans hope to see the train pushed farther north.”

And push farther north it will, next year, with its terminus at Burlington.

Last week in Middlebury, Greenwood Industries, a roofing contractor out of Worcester, Massachusetts, installed the metal seamed roof at the platform and Kubricky Construction installed an enclosure at the south end of the rail platform to house a lift to assist disabled passengers in boarding the train.

A few details need to be completed but local passersby got to feast their eyes on the long-awaited “depot” this week.

According to email updates to local residents by Jim Gish, community liaison for the wrapping-up Middlebury Bridge and Rail Project, the current plans are for the Ethan Allen Express are to arrive in Burlington in the evening and depart southbound in the morning for New York City, with stops in Vergennes, Middlebury, Rutland, and Castleton.

The new northern terminus for the line will be Burlington’s Union Station, which is located at the foot of Main Street on Burlington’s Lake Champlain waterfront.

Amtrak service, via western Vermont, has been a long time coming. Four phases, outlined here by VTrans, focused on the Burlington end and were started over a year ago:

The overall job has been a herculean undertaking with one of the largest projects being this summer’s completion of the Middlebury Tunnel.

But work down-the-line also took place; it included rehabilitating or replacing 31 bridges on the Vermont Railway between Hoosick Junction, New York, and Rutland, to allow for 286,000-pound train operation.

According to VTrans’ 2021 Vermont Rail Plan, “freight trains can move a ton of freight more than 470 miles on one gallon of diesel fuel. Passenger trips by rail emit less than one-third the volume of greenhouse gases of passenger trips by automobile on a pounds per passenger basis.”

4 thoughts on “Build it and they will come: Amtrak depot stands ready for 2022 service in Middlebury”