A world-renowned physicist-turned-public speaker on election integrity matters, Dr. Douglas G. Frank, is coming to South Burlington on Jan. 14 to speak on issues concerning how to protect and improve our elections.

Frank’s impressive academic credentials deal mostly with science and physics. Dr. Frank is “a world-renowned physicist with 60 peer-reviewed scientific publications, including cover and feature articles in the world’s leading scientific journals,” according to a news release by Vermont Grassroots. 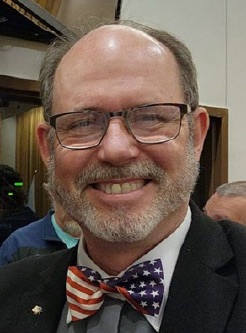 His doctorate is in surface-electroanalytical chemistry, which is an area of study that combines chemistry and physics. It involves “the manipulation and analysis of molecules on surfaces.” By 1996, Frank’s work contributed to the improved manufacturing of electron microscopes, laser scanners, and precision manufacturing and control devices.

After the 2020 election Frank turned his scientific focus to data analysis efforts on the 2020 presidential election. He will discuss his findings when he visits Vermont in January.

“By analyzing election and voter registration data, Dr. Frank is able to demonstrate that the 2020 general election was not honest and fair and that major problems still remain,” the news release states. “Since December 2020, Dr. Frank has worked ceaselessly for election integrity and reform with grassroots teams in over 40 states.

“He has met with Secretaries of State, State Attorneys General, dozens of legislators, and hundreds of local election officials to improve election integrity. Dr. Frank was featured in Mike Lindell’s documentaries ‘Scientific Proof’ and ‘Absolute Interference.'”

Frank’s talk will offer details of evidence of recent election fraud, but he will also focus on steps that concerned citizens can take to “create a ground game to effect positive change.”

National headlines on allegations of election fraud continue to appear on news sites since the 2020 and 2022 national elections. One of the latest examples is Arizona Republican gubernatorial candidate Kari Lake, who filed a 68-page lawsuit last week against Arizona’s election officials, contesting the 2022 results for her race against Democrat opponent Katie Hobbs. Lake reportedly trailed Hobbs by less than 1% of the tallied votes.

In her lawsuit, Lake cites a Rasmussen Poll that showed 72% of Americans agreed with her statement that Arizona “botched” their gubernatorial election. Polls conducted on the 2020 presidential election also by Rasmussen have yielded similar results, illustrating an overall distrust in federal elections among the general public.

Some conservative commentators are growing frustrated with the lack of progress in undoing controversial election policies — a lack of ID requirements, universal mail-in ballots, outdated voter rolls — that contributed to doubts about the last two election cycles.

“Their lack of spine and urgency to protest and legally challenge numerous election irregularities emboldened our ‘friends’ across the aisle to be more blatant with election shenanigans,” Robin Itzler wrote in the American Thinker on Sunday. “The proof is Arizona’s gubernatorial election.”

A poll by the Trafalgar Group conducted about a week after this year’s midterms showed that Democrats mostly think elections are going OK, whereas a nearly identical percentage of Republicans do not.

Dr. Frank will be in South Burlington 9 a.m. Saturday, Jan. 14 at the Vibrant Church. Attendees of the event are encourage to make a minimum $10 donation. More information on the event can be found at the Vermont Grassroots website.