Two seats on the Winooski City Council are up for election this Town Meeting Day — and five candidates will by vying for the top spots.

All candidates are competing for the two seats, and voters may cast votes for two candidates. The two who receive the most votes will win a seat on the council.

Councilors Amy Lafayette and Jim Duncan’s seats are each up for re-election, but only Duncan will be seeking a second term on Council.

Here is a preview of the candidates for Tuesday’s election: 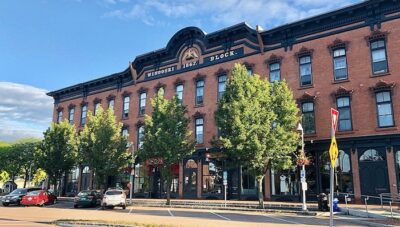 The Winooski Block, located in the city of Winooski, Vermont

Jim Duncan is 39 years old, and is a researcher for the University of Vermont’s Rubenstein School of Environmental and Natural Resources, where he works as the Director of the Forest Ecosystem Monitoring Cooperative.

Duncan grew up in Essex, Vermont, and has lived in Winooski for more than eight years, raising two daughters with his wife, he said.

“I’ve always had a thing for Winooski,” Duncan said, citing the strong sense of community he has always felt in the city. “I really do actually enjoy the work on City Council because it gets me out with my community members.”

Duncan received his Undergraduate degree in Physics from Haverford College, and received his Master’s degree in Geography from Oregon State University.

“The reason I’m running for two more years is because I see there’s a lot of great things set up, around equity work, around housing affordability… I want to stay engaged and involved to see them through and try to give them the best chance at success that I can,” Duncan said.

Housing affordability is a crucial issue for Duncan.

Duncan emphasized his concern for the affordability of units that can house entire families.

Duncan cited environmental issues in the city as being of personal importance to him. He hopes to continue work for urban tree plantings, and make maintaining green infrastructure a priority as to “make it possible to live here without owning or driving a car” with eco-friendly public transportation options.

His highest priorities for the next budget will be continuing to support the equity work he has already started, and to look at how to fund the city’s housing trust fund on a more sustainable basis.

Duncan is in support of Article Five, which would allow for the operation of cannabis retailers within the city.

Dallas Wheatley is 28 years old, and works at IBM in Essex Junction. Having grown up in Virginia, Wheatley has lived in Winooski for seven months.

“I’ve been trying to move to Winooski for a while, and it’s been an issue of finding places I could afford,” Wheatley said. They have long been attracted to the diversity of Winooski, and have come to love the kindness of the community.

“It’s a very welcoming place. It’s me realizing that my car just got stuck on the ice outside on the driveway, and people who are leaving their house to go out to do errands in the middle of a pandemic turn around and bring me a shovel,” Wheatley said. “It’s people like that that make Winooski really special,” Wheatley said.

Wheatley received their Undergraduate degree from Mt. Holyoke College, and their Master’s in Quaternary and Climate Science from the University of Maine.

In their free time, Wheatley is a voice director and a voice actor for audio fiction productions. In their projects they adapt fairy tales and myths into radio plays dealing with Queer identity, trauma, and isolation to help teens and young adults who may be struggling.

High cost of rent is a crucial and personal issue to Wheatley, who has themself experienced what so many struggle with in finding a place to make a home in the city. Wheatley expressed particular concern for renters in the city, saying that “a preliminary search for basic rental costs and mortgage costs in Winooski shows a drastic difference between the amount of spare income people have after paying their monthly bills.”

Racial and social justice is another issue of importance to Wheatley.

“Nearly all of our indigenous residents, and nearly half of our black residents—as of 2018—were living below the poverty line,” Wheatley said.” This is compared to 25% of white residents in this town.”

Wheatley hopes to address issues of accessibility and infrastructure in the city as well. A water main which had ruptured on their street earlier in February—blocking off the street for more than two days and forcing residents to rely on purchasing gallons of water in the meantime. Wheatley expressed concern over a similar issue potentially affecting the senior living center just a block away from their residence.

Regarding the city budget, Wheatley said they want to look into why things like police funding are getting more funding than things like community services and public works.

Wheatley is in support of retail cannabis in Winooski, but wants to ensure that access is made for those who struggle financially to get medical cannabis they need, as well.

Wheatley is also in favor of urging the state to halt F-35 training flights in the area.

“It’s an incredibly offensive show of force to a city that openly takes in immigrants and refugees, and I don’t think that is a secret to the US government,” Wheatley said of the F-35 flights over the city.

James McCormick is 28 years old, and a native of Essex, Vermont. He has lived in Winooski for four years, and loves the diversity the city has to offer, McCormick said.

“Where I live there’s families that speak French. I open my front door and there’s people walking around speaking French, and I think that’s pretty awesome.”

“I pretty much rebuilt this whole house from the inside out,” McCormick said of the home he owns, which was built in 1929. “I really like the idea of fixing up old houses.”

McCormick wants to improve city infrastructure, and said that, “I think someone with my construction background is going to have a little better insight” regarding itemizing bills and planning for projects in the city.

McCormick believes his experience will allow him to help reduce unnecessary expenditures in the city’s budget for construction projects.

McCormick also wants to address poverty in the city.

“They had said it was 62% of students who qualify for free or reduced lunches in Winooski,” said McCormick, after listening to a school board presentation. “That’s a pretty significant percentage.”

He is concerned with the high stratification of incomes in the city, and worries for families who live on a month-to-month basis.

Parking is another issue McCormick hopes to address.

“There’s really nothing being done to address parking necessity with these new construction buildings,” he said, worried of the effect this may have on the parking availability for local businesses.

McCormick is in support of allowing retail cannabis in the city, and a ballot measure that urges the state to halt F-35 training. McCormick would like to see more discussion and input surrounding the jets, including the impact on property values.

“People are getting tired of the noise,” he said, expressing his concern that the F-35s will make properties more difficult to sell, and that their noise may disrupt critical interactions — such as volatile police de-escalation situations.

Bryn Oakleaf, 38 years old, is a program manager for Efficiency Vermont. She grew up in West Hartford, Connecticut, and has made Winooski her home for more than eight years. She has loved the positive changes and growth she has seen in the city, she said.

“I want folks to know that I’m running as a write-in candidate, and to consider me when voting on Town Meeting Day,” Oakleaf said.

Oakleaf received her Undergraduate degree at Mt. Holyoke College, and her Master’s in Environmental Law and Policy from Vermont Law School.

In her free time, Oakleaf loves to bike, rock climb, and compete in the Greater Burlington Women’s Softball League.

“It was really wonderful to have that opportunity and to get to know people through that community service,” she said of the league, and hopes to create more similar opportunities in the city.

A primary issue of concern for Oakleaf is keeping housing affordable and accessible.

“Not just for me but for many residents the tax rate has increased pretty significantly over the last five years,” Oakleaf said. “It’s going to price a lot of folks out of the city—both renters as well as homeowners.”

Oakleaf hopes to address this through “smart growth” by attracting more residents and businesses to the city “in a very mindful and strategic way.”

Oakleaf plans to incorporate energy and climate into committee work, and promote “adaptation and mitigation efforts” for the city. She expressed concern for energy saving in the city’s wastewater treatment facilities.

Racial and social equity is another issue Oakleaf hopes to address. Oakleaf said she wants the city to look at how expenses can be reduced and better allocated to support underserved populations.

“We really do need a budget item, or at least support from the state, for funds to ensure we have sufficient translation services for our new-American population,” she said.

Oakleaf is in support of retail cannabis.

“It could bring in additional business and additional patrons that may go to other restaurants and other spaces in the city, so for that reason I think that there can be an economic benefit both for businesses as well as the tax base,” she said.

Sam Myers is 41 years old, and works in sales for Farrell Distributing Corporation in South Burlington. Myers grew up in Winooski and has lived in the city for the past 10 years, where he now lives with his wife, Kristina, and their two cats.

“Being third-generation born and raised in Winooski, I care deeply about my community,” Myers said.

Myers’ grandfather, his grandfather’s brother, his uncle, and his own brother have all served on Winooski’s City Council.

“Community service is in our blood,” he said.

Myers has previously served on the city’s Charter Commission.

“First and foremost,” Myers said, “I want to serve my community, tackle problems, and come up with common-sense, fair solutions.”

“When most of the tax revenue is coming from property owners—I think it’s 80%—I think we need to go to the drawing board and figure out how to bring more tax revenue in,” he said, adding, “I’m not for [raising taxes] at all.”

Myers says he hopes to address infrastructure issues in the city, expressing concern with sidewalk quality, saying “we have horrible sidewalks, and we need to add sidewalks.”

Myers also plans to address parking in the city. He said overflow parking from newly-constructed high-rises has been a “major issue,” and he is concerned with the effect parking may have on local business owners, as well.

Racial equity is another issue of importance to Myers.

“It’s good to have all voices at the table,” he said.

Myers is in support of this year’s proposed city budget, and supports retail cannabis in Winooski.

Myers said he will likely not support a ballot item which would have the city urge the state to halt F-35 training flights in the area.

“I support the Vermont National Guard’s mission,” Myers said. “Growing up… the F-16’s flew over my house everyday, and when I was a kid I would just stop with pure amazement—I loved it,” Myers said.

“If it affects a child, then we may have to go back to the drawing board and review this,” he said of the jets.