Residents of the Town of Essex will be voting on a new charter that would merge the town and the Village of Essex Junction.

Voters in the village approved the merger plan according to a slightly different charter in November. The town’s selectboard says the merger would occur over a 12-year period and would provide many benefits to the members of both the town and village.

Town and village governments have been working on their respective charters since 2018, after more than 20 failures to merge over the years. The most recent attempt at a merger was in 2006 when both entities voted to merge, only for the result to be overturned by a town-wide revote in 2007.

While governments remain hopeful that this charter will finally succeed, public opinion is passionate and varied on the proposal. The animosity between the pro- and anti-merger communities has been growing as the March 2 voting day approaches.

“I’m really concerned about the lack of civility in our public meetings that have happened recently and the lack of respect and understanding,” said State Representative of Essex Junction and former Village Trustee, Lori Houghton. “I hope we can all accept what happens in March and move forward and bring back what it’s like to live in Essex, which is a community that looks out for each other and respects each other.” 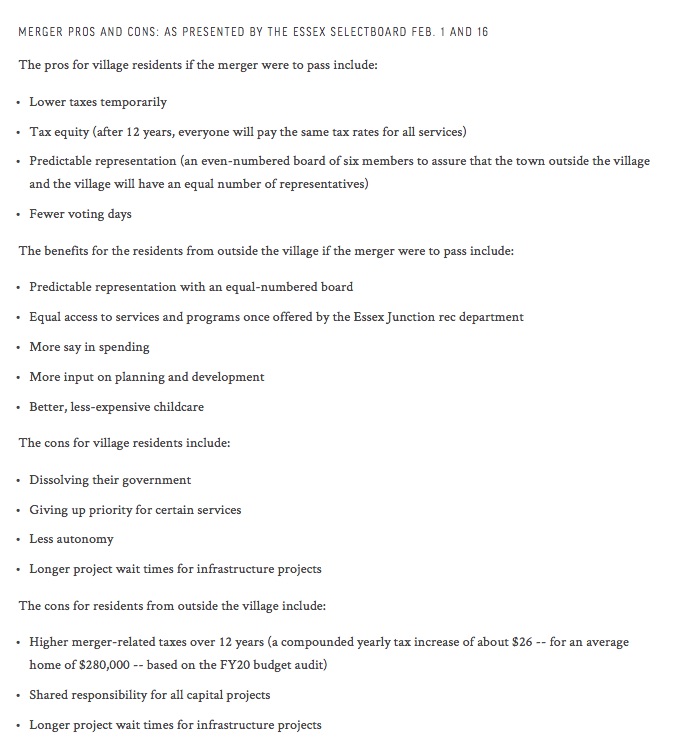 Evan Teich, Essex’s unified manager, says he sees the discourse settling. “I foresee that, as the village and the town work together with a better vision of the community they want to be, people will continue to love living here.”

Elaine Haney said she often receives backlash as both being pro-merger and the chair of the Essex Selectboard.

“When you decide to become a public servant, one of the things you must accept is that all of your work is in the public eye, and you must understand that people will disagree with you,” Haney said. “When I sit on a board as a selectboard member, I represent about 22,000 people. So the 10 or 12 people who show up to our meetings and have a lot to say, I hear them loud and clear, but I also have to think about the 22,000 other people that are in my town that I’m making rules for, making changes for, and doing budgets for.

Irene Wrenner, a former Essex Selectboard member, is a prominent leader in the anti-merger campaign — creating both a website and a TV show to highlight some of the shortcomings that she and like-minded active town member Ken Signorello, believe are associated with the merger.

“I’m just concerned the current selectboard is not being able to sit at a table and bring enough representatives from outside the village and figure out how to make this fair to them,” Wrenner said. “This is not a fair negotiation or a fair fight. To me, that’s the whole crux of the problem. There’s a merger plan put together by the village for the village, but everyone is being asked to vote on it. I don’t think it’s fair to ask people to vote on this really complex merger plan that [the town area outside of the village] hasn’t had time to understand and may be voting for the wrong reasons due to the complexities and COVID-19.”

“People keep telling me, ‘Well, we’ll just adjust it afterwards,’ he said. “And one of the tenants of going into this is we’re setting up these districts and we’re not going to mess with them. Because they’re part of the deal. That’s part of what you voted for.”

“The second-largest community in the state of Vermont should be able to carry some weight in what happens in Montpelier,” said Myers. “And so I think the merger is the way to go.”

There is a group that holds less of an expressive opinion about the merger: public safety officials.

“There are benefits to a merger for the police department in simplification of ordinances and in that we will answer to just one elected board” said Essex Police Chief Ron Hoague. “However, the police department has worked well with both entities for 40 years now and will continue to do so either way.”

Essex Fire Chief Charles Cole, who has also been a member of the Essex Junction Fire Department (EJFD), shares a similar sentiment about the good relationship between him and the EJFD.

“When I was a member of the village department, we had automatic mutual aid agreements. Since then, we’ve been going to each other’s calls and, and so forth.” said Cole.

However, Cole said that abiding by one set of ordinances and formally combining the two departments would increase efficacy.

“Absolutely, yeah; one set of life safety codes that cover both communities would be a huge plus,” Cole said. “Much like we have right now with the police department, you have kind of some ordinances that need to be combined so that the police are only enforcing one set of ordinances, absolutely.”

There will be an online informational meeting on March 1 for all ballot items including merger. The polls are open on March 2 from 7 a.m. to 7 p.m. Voting on the budget and the merger plan will be via Australian ballot, and voting takes place at Essex High School for village residents and Essex Middle School for residents from the rest of the town. Find a sample ballot on the town’s website.